This month, our Spotlight shines on London-based womenswear designer Rok Hwang, whose training under Phoebe Philo gave him the confidence to launch his own womenswear label.

This month, our Spotlight shines on London-based womenswear designer Rok Hwang, whose training under Phoebe Philo gave him the confidence to launch his own womenswear label.

LONDON, United Kingdom — Since its launch in 2016, luxury womenswear label Rokh has enjoyed steady momentum. Currently in its second season, Rokh has already attracted 42 stockists worldwide and its deconstructed garments, designed by namesake founder Rok Hwang, have been featured in the likes of Self Service and M, Le Magazine du Monde.

Still, the brand remains relatively under the radar. “We want to grow organically, so there's no rush. We're moving step by step so the customer can understand the full aesthetic,” says Hwang.

Launching for the Autumn/Winter 2017 season with a line of reconstructed acetate skirts ($570), draped silk, panel dresses ($890) and double-breasted, wool overcoats with removable sleeves ($1,640), Rokh quickly found success, attracting the likes of Leclaireur, Lane Crawford and KM20. “I don’t have a [general] theme but I want to capture teenage tastes and uncertainty, before it becomes too perfect and when it’s a bit unnatural, raw and unfinished,” he continues. 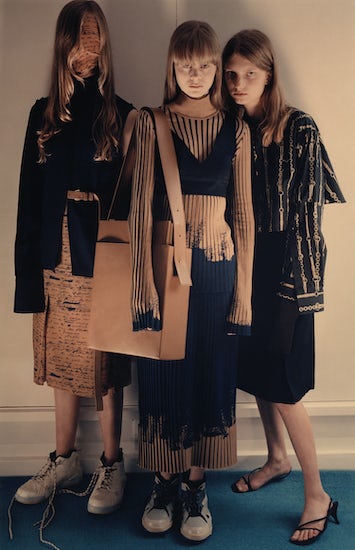 Playing with the contrast between femininity and masculinity, Rokh’s elegant, adaptable wardrobe for its “Rokh woman” is more about seasonal evolution than revolution. “I always have a strong wardrobe in mind that’s ageless and seasonless... The clothes are a bit nostalgic [and familiar] but with a twist,” explains Hwang.

Born in Korea, Hwang grew up in Austin, Texas, before moving to London in 2004 to attend Central Saint Martins, where he earned a BA in menswear, followed by an MA in womenswear, training under the late Professor Louise Wilson, who mentored the likes of Alexander McQueen and Christopher Kane.

“It was at a really challenging time when I was trying to create my own world,” recalls Hwang, who despite having no work experience under his belt, unlike many of his peers, went on to win the first prize for Central Saint Martins’ graduate collections in 2009. “That took me to a nice place where I had the chance to start my own business, but I wanted to gain some more experience… I wanted to find my ground and understand the industry a bit more.”

Hwang joined Céline in Paris, where he worked under Phoebe Philo as a ready-to-wear designer for Philo’s debut collection for the house. “I was really into what Phoebe was doing at Chloé. When she started at Céline I knew it was going to be the right place for me,” remembers Hwang. “I guess Céline was a really educational experience; I learned about garment construction and got lots of good industry contacts.”

After three years in the role, Hwang parted ways with the company to continue as a freelance designer for Chloé and Louis Vuitton. It was during this time that Rok started getting the experience and confidence he needed to start his own line. “It was valuable time during which I built up my own system,” says Hwang. “I wanted [my own brand] to be very smooth and get everything right in terms of quality, production, delivery etcetera. I wanted to plan ahead.”

The label now has a team of 10 people across design, production and sales — all based in the company's north London studio.

In January 2018, Rokh will launch its first pre-fall collection. Expanding into menswear and an own e-commerce website are to follow in the future. “We want to do it quite quietly, because at the moment the main focus is to push our brand image with our main collections,” says Hwang. “Next year we’re planning on our first show in Paris but we’re slowly moving step by step, there’s no rush.”