'Wearable, convincing and believable' sound far from ground-breaking, but the LVMH Prize nominees behind London-based brand Stefan Cooke are out to prove that craftsmanship isn’t dead.

'Wearable, convincing and believable' sound far from ground-breaking, but the LVMH Prize nominees behind London-based brand Stefan Cooke are out to prove that craftsmanship isn’t dead.

But rather than mourning the state of the menswear market, a few young designers who don’t fit the current mould are already preparing for what’s to come. “A lot of people are saying that there’s going to be that resurgence of a man who wants tailoring and nice trousers without the hype,” says Jake Burt, one half of the duo behind London-based menswear brand Stefan Cooke, alongside Cooke himself.

Burt and Cooke, who are partners in life and work, established the brand in 2017 after graduating with MA degrees from Central Saint Martins in womenswear, and menswear and textiles respectively. In the short span of two years, the emerging label has already honed its voice amid London’s crowded menswear scene.

The pair haven’t gone unnoticed. A month after showcasing their third and last collection under talent incubator Fashion East at London Fashion Week Men’s, the brand has just been named one of the twenty semi-finalists for the LVMH Prize, to be showcased at a cocktail on Friday.

When Burt uses the shorthand “tailoring and nice trousers” to describe what the brand is about, he hardly does it any justice. For a label that’s just finished its third season, Stefan Cooke already boasts an impressive collection of stockists. The line-up includes Dover Street Market, Machine-A, Rare Market, and MatchesFashion, with whom it recently launched an exclusive capsule collection of button-linked ‘chainmail’ strap handbags. 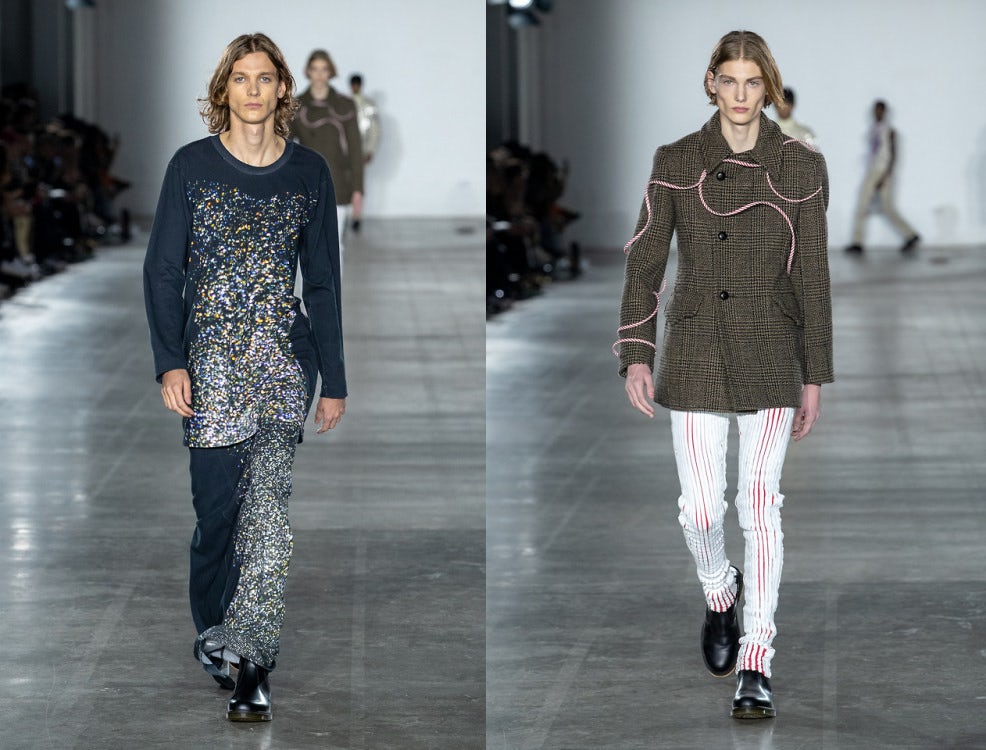 To commemorate the brand’s graduation from Fashion East, the Autumn/Winter 2019 collection was celebratory. On quintessentially British wool jackets taken in at the waist for a feminine silhouette, corset boning created airborne ‘streamers’ weaving in and out of tessellated panels. A trompe l’oeil came in the form of jersey-printed ‘glitter’ inspired by Versace’s iconic diamanté dress, a tongue-in-cheek portrayal of accessible glamour.

“There was this idea of the flash photography that burns your retinas in a club, capturing the diamanté that shone so much on the catwalk… this glamorous night and atmosphere, but accessible,” says Burt.

On the runway, expertly crafted separates were elevated with off-kilter accents and textiles: jackets (£3,080, around $4,076) and trousers (£2,736, around $3,623) were “slashed” with leather and lycra for a form-fitting rib, inspired by the elastic panel on a Chelsea boot the duo spotted in a vintage store. A fitted coat was layered under a chainmail-like shawl (£950, around $1,258), which upon closer inspection is meticulously made out of metal snap fasteners. 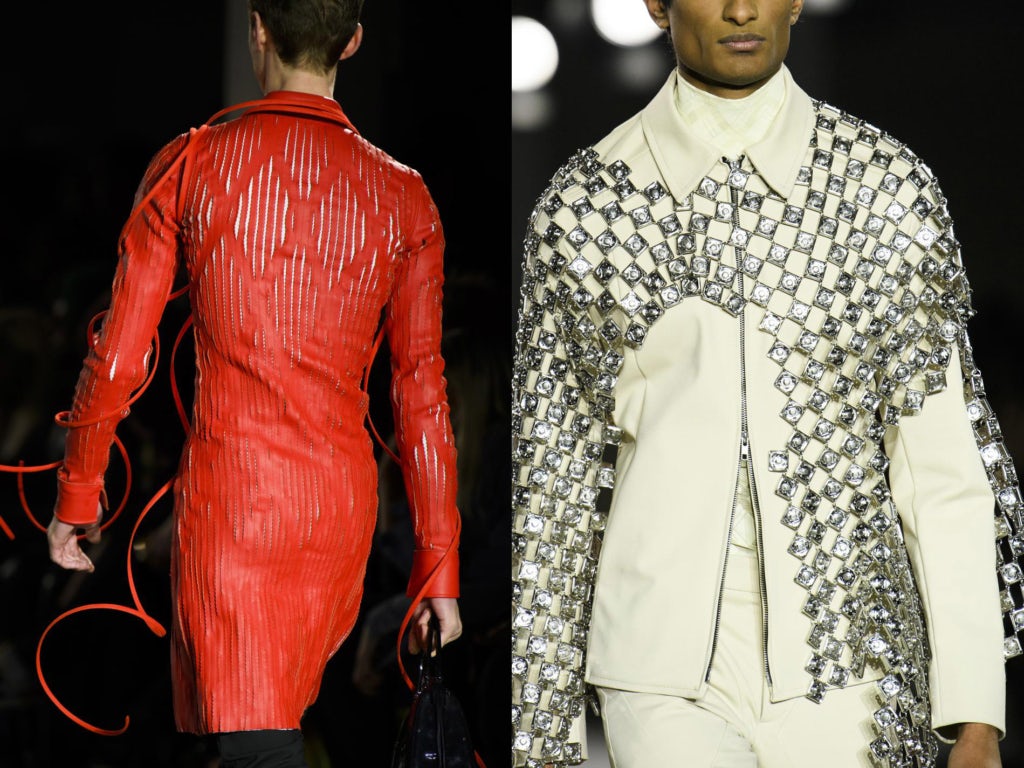 Cooke and Burt are obviously fond of laborious — and some might argue commercially nonsensical — details, a rarity in a time of $600 T-shirts. But quirks are executed with a precision that sets investment pieces apart from costumes, which is why Burt isn’t wrong when he describes the pair’s aesthetic as “wearable, convincing, and believable.”

“It’s about exploring what you can do within what already exists, clothes we would actually wear, and thinking about how we can warp it, change it, often in the slightest way,” he remarks.

Perhaps this is why the brand’s pieces can be unique while ineffably grounded in reality. “In education you’re taught that concepts are the beginning of everything,” says Cooke. “We’ve done three seasons now and think there needs to be clothes first, so the concept comes afterwards.”

And more so than strong artistic references, Stefan Cooke collections are inspired by the duo’s ruminations. “We’ve built up a language whenever we look at designs,” says Cooke. “Each piece is a sentence,” Burt echoes. “We’ve been together seven years and still have the dreamy conversations about fashion that we had when we were 19.”

We think there needs to be clothes first, so the concept comes afterwards.

Currently, Stefan Cooke’s pieces are all made in the UK, save for knitwear, which is manufactured in Italy. And though winning the LVMH Prize’s €300,000 (around $340,265) grant could mean big things for the two-person team, their focus for now is on getting the funds to hire a full-time employee for support in the studio.

“Some people’s aspirations are to have a huge global company, but we’d be happy if we had a little more help for production and a flat to ourselves,” says Burt. “That’s as big as we’re interested in becoming.”

In the meantime, Burt and Cooke will continue to hone their craft while resuming their design dialogue, seven years and counting.

“In the past year, craft hasn’t necessarily been at the forefront of anything. That’s really what we’re fighting against.”

The BoF Podcast: Tim Blanks on the January Menswear and Couture Shows