The Whimsy of Anna K

For this month’s Spotlight, sprite-like model-turned-designer Anna Karenina talks to BoF about the quirky, macabre inspirations behind her whimsical womenswear brand.

LONDON, United Kingdom — Hailing from Ukraine’s capital, Kiev, Anna Karenina, launched her womenswear label Anna K, now in its fourth season, at the young age of 16. Her Autumn/Winter 2015 collection, presented in London, was a girly showcase of bright knits, exaggerated collars, large ribbons and — for the final look — a tin foil dress with a gigantic bow on the front, modelled by Karenina herself.

Behind each of her collections are ideas shaped by quirky, melancholic fairytales. The Little Match Girl, a Danish tale about a poor, young girl selling matches in the street on a cold winter’s evening, inspired Karenina’s latest collection. As the story unfolds, the child dies during the night; the next morning, passers-by feel remorse for not having shown her kindness before her death. “I’m really inspired by these kinds of forlorn tales. I look to storytellers like Tim Burton,” said Karenina. “The story might sound tragic, but I think [the Little Match Girl’s] death is actually a positive moment. She will find a new life after she dies, which is why there are lots of colourful pieces in the collection and lots of dresses.”

Karenina, who shed her former surname, Kolomoets, last year, adopting the name of Leo Tolstoy’s tragic protagonist instead, first entered the fashion industry as a model. “That is why the name of the brand is Anna K. When I was modelling in Kiev, my name was shortened, because it’s more catchy, more memorable,” she explained. “It was only when I was modelling, by working with designers and speaking to them, I understood that I wanted to start designing too.” Karenina attended the Kyiv National University of Technology and Design, where she was able to develop her drawing and design skills.

Karenina’s first collection was shown in 2012 at Mercedes-Benz Kiev Fashion Days, which takes place twice a year in May and October. She later scored a showcase at Pitti Immagine. “They were doing a Guest Nation project in January 2014, which introduced six of the most interesting designers from Ukraine and I was one of them.” That season, she received her first orders — from leading retailers like Luisa Via Roma and Colette, which took to her slogan t-shirts poking fun at fashion industry clichés, with catchphrases such as ‘it-girl,’ ‘fashion insider,’ and ‘fashion circus,’ as well as the titles of films such as Breathless, Pretty in Pink and Funny Face. 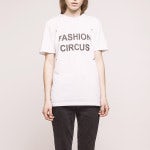 Today, the brand has 40 international stockists, including Lane Crawford, Revolve and Isetan, and has recently launched an e-commerce site that ships worldwide. Her slogan t-shirts start at $74, with dresses averaging about $350. The company’s in-house team consists of eight people, all based in Kiev, except for a communications agent, who is based in Paris.

For this month’s Spotlight, Karenina has designed a custom BoF logo featuring a blue gemstone. “The gem symbolizes the tears of the Little March Girl, which are also spread throughout the collection as Swarovski gemstones on my dresses,” she explained.

As for the future, Karenina aims to open standalone retail stores in Kiev, then Paris. “I already have a concept of the store and how it would look, and I already know exactly where in Kiev I would open,” she said. “I am also planning a more mature line called Anna Karenina, which will be more suited for grown up ladies, as I become more mature myself.” The company has recently taken on an unnamed investor, who has a 50 percent stake in the business, said Karenina.