With a new genderless label, set to debut at London Fashion Week on September 16, the designer aims to build something that is sustainable — environmentally as well as economically.

With a new genderless label, set to debut at London Fashion Week on September 16, the designer aims to build something that is sustainable — environmentally as well as economically.

LONDON, United Kingdom — Pedro Lourenço is back with a new gender-fluid label, two years after shuttering his namesake womenswear line, which he launched at the age of 19 to critical acclaim from fashion insiders, some of whom compared his clean, architectural style with that of Nicholas Ghesquière.

“I found doing womenswear quite restricting, I like the idea of equalising everyone,” explains the designer, who became La Perla’s first-ever creative director in January 2016 but abruptly exited the lingerie brand after only six months in the job. 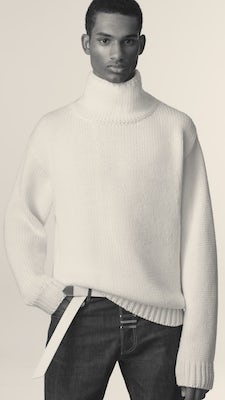 The new line, named Zilver, is genderless and integrates streetwear and high fashion. “I love this vision of taking the divisions society puts between people and all these classifications and breaking them,” explains Lourenço.

This time around, the designer also aims to build something that is sustainable — environmentally as well as economically. “The difference this time is that I have a clear positioning and a consumer in mind when I am creating, as well as a very clear understanding of the brand values,” adds Lourenço.

For Zilver’s first collection, set to debut during London Fashion Week on September 16, Lourenço was inspired by an eclectic mix of references, including rockabilly music, 1960s astronauts, American workwear, boxing and motocross uniforms, as well as fellow Brazilians such as architect Oscar Niemeyer and race car driver Ayrton Senna.

Pieces include a biker jacket made from painted recycled denim (about $1,700), an organic cotton skirt (about $640) that references artist Jean Baptiste Fastrez’ Boat and a helmet bag (about $1675) made of organic leather and inspired by Parisian youth whose biker helmets often double as carriers for their keys and wallets.

Lourenço’s obsession with fashion began early. As a child, he accompanied his designer parents, Reinaldo Lourenço and Gloria Coelho, to Comme des Garçons and Yohji Yamamoto shows and photography exhibitions of Irving Penn and Richard Avedon. At the tender age of 12, Lourenço became the lead designer for his mother’s diffusion line Carlota Joakina. His first collection for the label was shown at Sao Paulo Fashion Week in 2002.

“I would control every garment and every stitch,” says Lourenço, who says he worked on the collections during his school holidays. “When you’re able to experiment as a kid you have no preconception but when you grow up you get stiffer with all the rules. Now, it’s about learning how to balance maturity and freedom.”

Millennials Say They Care About Sustainability, So Why Don’t They Shop This Way?

The Trouble with Brazil’s Luxury Market