A CORUÑA, Spain — Pablo Isla is stepping back, but he’s not giving up control.

It is early July and the executive chairman of one of fashion’s most powerful companies — Zara-owner Inditex SA — is sitting on an artfully casual, white linen Zara Home couch in a light-drenched room at the Spanish fast fashion giant’s A Coruña headquarters. The chairman — who until Tuesday was also chief executive — is making it clear that, for now at least, he is still the public face of the company.

He is giving a rare briefing beyond the prescribed sessions the company does for its quarterly financial results. Inditex acknowledges that it likes to keep a low profile, but disputes the idea that it is not open. Others disagree.

“The place is a complete black box,” said Credit Suisse analyst Simon Irwin. Isla himself rarely gives interviews. And technically he is not giving one now — a limitation the company subsequently put down to timing. He is meant to be here simply for a meet and greet: a discreet background figure to a spotlight presentation on Zara’s sustainability initiatives that is the purpose of the gathering. But he can’t help interjecting at regular intervals, clarifying a point here, elaborating there.

The place is a complete black box.

Within the first ten minutes, he has jumped in to expand on Zara Chief Financial Officer Miguel Diaz’s introduction. “Miguel was explaining it quite well,” Isla said, launching into more detail on the company’s integrated and nimble sourcing model, before adding, “sorry,” and turning the presentation back over to the team of waiting Zara executives.

The gathering comes amid big changes at the Spanish retail giant. On Tuesday, Inditex’s board confirmed Chief Operating Officer Carlos Crespo as the company’s new CEO, splitting up the dual chairman/chief executive role Isla has held since 2011.

Inditex has played down the change. While largely unknown outside the company, Crespo is an Inditex veteran. He will continue to report to Isla, who will stay on as chairman. His appointment is intended to underscore the company’s commitment to sustainability and digital transformation — areas where Crespo is expected to direct his focus — rather than herald any major strategic changes.

After getting off to a slow start online, the company has big ambitions to adapt to fashion’s new digital reality. It’s aiming to sell all of its brands online globally by next year, an achievement that would make it one of the world’s first truly global apparel retailers. 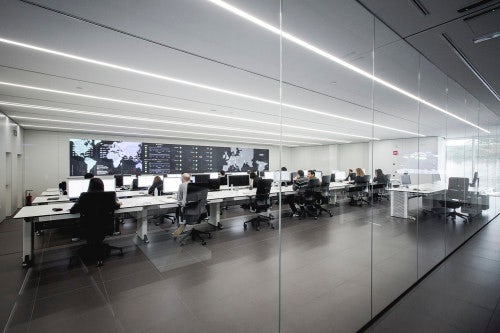 Alongside Crespo’s appointment, Inditex is announcing a number of new measures intended to highlight its commitment to sustainability. The company is installing a sustainability committee on the board to monitor its efforts and is linking executives’ long-term bonuses to achieving sustainability goals for the first time. At the same time, it's set new environmental targets for the company.

"We are very ambitious with regards to our commitment," Isla told investors at the company's annual general meeting Tuesday.

The initiatives come amid dramatic changes in the industry that are heaping pressure on retailers to change and adapt. The rapid rise of digital competitors — from e-commerce upstarts like Boohoo Group PLC to established giants like Amazon.com Inc. — is helping drive a shift to greater online consumption of fashion, forcing companies like Inditex to rapidly update their brick-and-mortar retail model for the digital age.

At the same time, the rise of the internet has brought a new degree of digital transparency to the fashion industry, fueling demand for greater openness from consumers and activists as awareness of fashion’s negative environmental and social impact goes mainstream.

The fast fashion giant is introducing a slew of new sustainability targets and reiterating existing goals.

Across the industry, brands are increasingly broadcasting their efforts to raise environmental standards, reacting to changing consumer values and anticipating the possibility of tighter regulation.

Inditex, which has driven success in large part through its ability to rapidly respond to the ebb and flow of consumer demand, is stepping up its sustainability initiatives, starting with its biggest brand, Zara.

“We wanted to share this with you very openly,” Isla told his select audience of journalists back at Zara HQ earlier this month.

Building on work already underway, the fast fashion giant is introducing a slew of new sustainability targets and reiterating existing goals, many of which will be implemented fastest at its flagship brand.

By the end of this year, all Zara stores will meet the company’s eco-efficient standards, reducing energy consumption by 20 percent and water consumption by 40 percent. All brands within the Inditex empire will meet this standard by next year.

The company is also increasing the amount of clothes it makes under its Join Life label — which indicates a garment has been made in factories that meet Inditex's highest environmental and social standards using materials or processes that are better for the environment. This year, 20 percent of Zara's total production will qualify as Join Life, up from 10 percent last year. The volume is expected to keep increasing, with more than 25 percent of the total group's products meeting the standards by 2020. 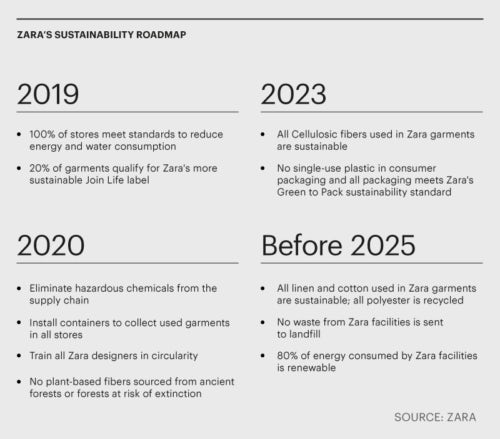 Inditex is working towards a 2020 goal to detox the fashion industry, an initiative promoted by Greenpeace. Elsewhere, it’s working on reducing the waste and emissions generated by its shipping and packaging. By 2023, the company plans to eliminate all single-use plastic from packaging for customers. It will require the use of its more sustainable Green to Pack standard for packaging throughout Zara's supply chain. Before 2025, it’s aiming to only use recycled polyester and ensure that all of its viscose, linen and cotton are produced more sustainably.

The company acknowledges there’s plenty more to be done and says it is working on more solutions.

“Everything connected with sustainability is a work in progress,” Isla said. “Our idea is progressively to work towards a very, very sustainable company.”

In some ways, the mentality to operate less wastefully is hardwired into Zara’s heritage. The company was founded in 1975 by dressmaker Armancio Ortega — now one of the world’s richest men — who took a bet that he could do better than the retailers buying his products. From the get-go, he tightly controlled the supply chain, centralising decisions about design and distribution, closely monitoring consumers’ response to products and swiftly responding to cues on trends and changing tastes.

Everything connected with sustainability is a work in progress.

Alongside Zara, it owns Pull&Bear, Massimo Dutti, Bershka, Stradivarius, Oysho, Zara Home and Uterqüe. While not immune to the disruptive forces currently buffeting the retail sector — the company experienced its weakest earnings growth in five years in 2018 — it has performed better than many of its competitors in the face of an onslaught of digital competition.

“When we purchase, we follow this demand-driven approach using an agile and flexible supply chain in order to minimise any waste of money, of resources of stock,” said Zara CFO Miguel Diaz, highlighting that in many ways, the company’s commercial team is driving its sustainability initiatives. “Our philosophy, our business model and our sustainability goals can and will live successfully side by side, and somehow, they are complementary.”

It’s a mentality on display at Zara’s manicured A Coruña headquarters. In cavernous white-washed rooms, teams of managers work to monitor Zara’s performance around the world. The whole system is centralised, so if someone leaves a light on overnight in a store in Beijing, operations managers in A Coruña will know about it and can shut it off from Spain. 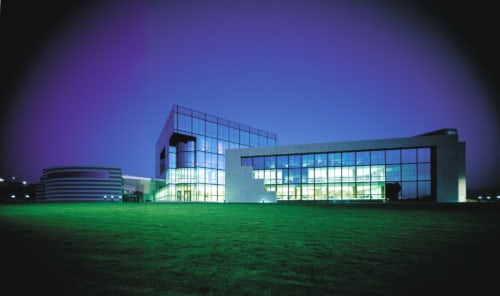 In one room, a wall-sized projection flags up analytics for the company’s online platform, breaking down the number of people connected to Zara.com by country and flagging common search terms. Elsewhere, product managers sit at banks of desktops monitoring how Zara’s clothes, shoes and accessories are selling around the world, and interpreting the data to feed intelligence back to the design teams. There are full-sized mock-ups of Zara shops and a whole studio dedicated to designing window displays.

In the nearby manufacturing facility, a group of women sit in a glass box, fitting a jigsaw of pattern pieces together on a computer to find the layout that generates the least waste. At the distribution center next door, cardboard boxes whizz by efficiently along a complex system of conveyor belts.

“No one nears the sophistication level of Inditex in terms of speed to market,” said Macquarie Capital analyst Andreas Inderst.

It raises questions about how sustainable any company that produces so much can be.

But while Inditex is a master of reducing business waste, the sheer volume of its output raises questions about how sustainable any company that produces so much product can be. The company doesn’t see its business model at odds with sustainability goals. It says its scale is what gives it the opportunity to make a difference, driving efficiencies and pushing its manufacturers to adapt their operations to meet the company’s sustainability standards.

Down one corridor, the offices shift seamlessly into a warren of studios — 31 in total on site — where swarms of photographers shoot leggy clotheshorses draped in the latest Zara styles. In one corner, a model in a flowing purple jumpsuit lounges in a chair. A few studios down, another is striking a pose in a slouchy satin peach suit. The clothes shooting now will arrive in store within a week, and land online even sooner. Their design was probably decided only a few weeks ago.

On average, Zara releases 500 new designs a week, 20,000 a year. But Isla insists: “We don’t feel like we are making a massive amount of clothes.”