BoF reports from the Copenhagen Fashion Summit, where founder Eva Kruse is trying to turn a hub for conversation into a genuine catalyst for action.

BoF reports from the Copenhagen Fashion Summit, where founder Eva Kruse is trying to turn a hub for conversation into a genuine catalyst for action.

COPENHAGEN, Denmark — “Do any of you remember the 10-year plan of action we launched in 2009? No?” said Eva Kruse, president and chief executive of the Global Fashion Agenda, which organises the annual sustainability-focused Copenhagen Fashion Summit. Kruse was speaking at the latest instalment of the event — held in the Danish capital’s Koncerthuset — in front of an assemblage of fashion leaders and sustainability experts from around the world, many of whom shared her frustration with the industry’s lack of action on the issue.

To be sure, fashion’s attention span is short — and, when it comes to sustainability, talk can be cheap. “If we had to go to yet another conference where we hear pledges, promises, targets to achieve, discussions on what it will look like, we will all become old before it actually happens,” said Livia Firth later in the day, echoing Kruse’s frustration.

If the global population rises to 8.5 billion people by 2030 as the United Nations expects, overall apparel consumption will jump by 63 percent from 62 million tonnes to 102 million tonnes. In the face of this projection, the imperative to deliver products with more positive impacts on the environment and society has never been more clear, argued many of the speakers at the Copenhagen event. And in a year defined by sharp political divisions in Europe and the United States, fashion leaders are feeling the pressure — or the freedom — to make more than promises. Just this week, Tiffany & Co. took out a highly-publicised advertisement in The New York Times, urging US president Donald Trump to uphold the Paris Climate Agreement. 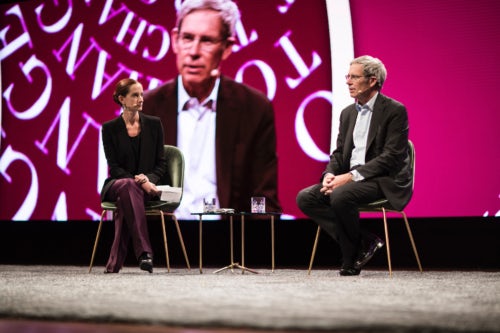 “If you are a company that is committed or even claims to be committed to responsible behaviour, I think you have no option but to speak up and to act,” said Tiffany & Co’s interim chief executive Michael Kowalski, speaking to the newspaper’s fashion critic Vanessa Friedman onstage at the Copenhagen Fashion Summit. Tiffany employees were largely proud of the ad, but there was significant public blowback. “Our response was: this isn’t politics, this is science,” said Kowalski.

But Kruse wanted the Summit to be more than a hub of conversation about sourcing raw materials, cleaning supply chains and closing the product lifecycle loop. For the first time, the organisation called on fashion brands and retailers to publicly commit to making progress toward the adoption of a circular model — an approach to business rooted in reuse, eradicating waste by breaking down products at the end of their life cycle and turning them into the building blocks of new products — within the next six months. More than 20 companies, including Adidas, Asos, H&M and Kering, led the charge while Kruse put pressure on the more than 800 attendees to follow suit throughout the day.

But what makes this call to action different?

“It’s just more tangible and it’s more of a toolbox of elements; it’s something that every company can commit to and start doing,” Kruse told BoF. “We’re accelerating everything; since we have the backing of some of the largest companies in the world, it also gives it momentum to move forward.”

If we had to go to yet another conference where we hear pledges, promises, discussions on what it will look like, we will all become old before it actually happens.

One of those companies is the French luxury conglomerate Kering — a founding partner of the Global Fashion Agenda along with H&M, Target and other organisations — which released its 2025 sustainability goals in January. Its initiatives are manifold and prioritise transparency, finding new raw materials, animal welfare and cleaning up its supply chain. In March, the company helped launch the Amsterdam-based “Plug and Play — Fashion for Good” accelerator program to invest in disruptive new technologies for greater sustainability, including a system developed by London College of Fashion Student Irene-Marie Seeli to produce a leather alternative from mushrooms.

“One of the main challenges is to be able to finance the market, the volume, with the high quality you need, because when you are on the luxury side, you need to be sure that you have the highest standard with quality,” said Kering chief sustainability officer Marie-Claire Daveu at a roundtable with journalists. “We have to be sure that the red done by this kind of microbial organisms [in a new dying process] will be the exact same red that Saint Laurent used, so it takes time. But if you don’t push, nothing will happen… with incremental progresses you won’t change the paradigm.” 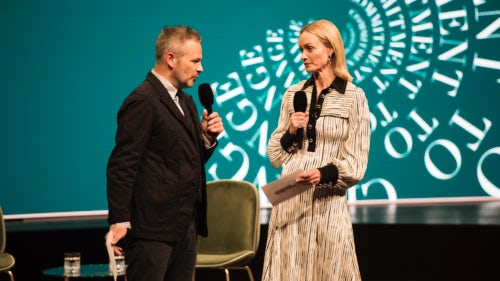 Setting concrete goals is key for Kering: Daveu explained that the company sets individualised targets (which are incentivised by executive bonuses) for each brand while using the scale of the company’s production to invest in systemic supply-chain changes. Much of her work, however, is about changing the mentalities of top executives and investors, as much as it is about shifting systems. “You have a lot of change management to do… if only for a risk management approach, sustainability is really key,” she said.

To benchmark the progress of the industry at large, the newly formed Global Fashion Agenda released its first ever industry report, compiled with the Boston Consulting Group and entitled The Pulse of Fashion 2017. Using the Sustainable Apparel Coalition’s Higg Index — data from over 20,000 self-assessments by member companies and factories — backed up by interviews, the report scores the “health” of the overall industry at only 32 out of 100. And it reveals that, contrary to popular belief, small to medium sized brands are, in fact, less sustainable than corporate behemoths.

Creating a community of change makers is critical.

One major outlier is Eileen Fisher. While several companies have made well-publicised commitments to sustainability in years past, including H&M and Kering, few have backed it up with concrete action quite like Fisher and her team. In 2015, the American founder of her namesake womenswear company committed to a five year plan to maximise the brand’s use of sustainable fibres and responsible chemicals, while using less water and reducing carbon emissions.

“Our original idea was we wanted to be a 100 percent sustainable company,” said Fisher on stage in Copenhagen. “I was at a big conference when I decided this and I just remember standing up and saying, ‘Yes!’ — thinking, ‘Oh my god, what are we thinking, this isn’t even possible!’” While Fisher has always prioritised sustainability, the plan kicked the brand’s efforts into high gear. “We moved things much faster than we would have,” Fisher told BoF, adding that the team has expanded its goals in the years since that proclamation. “People felt permission, that the company was committed to this, it wasn’t just an extra thing.” 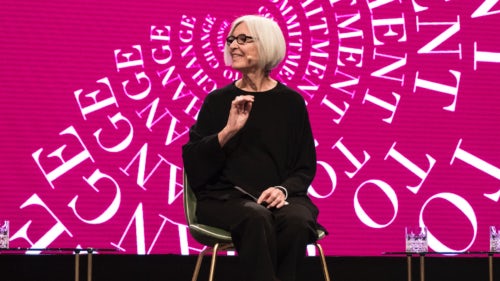 Fisher’s brand, however, is not immune to the challenges plaguing the American fashion and apparel industries. “We have the same problem, our customer is moving online. How do we get them into the stores?” she said. One way in which Fisher is answering to the problem is with unique pieces from her company’s new “Remade in the USA” collection. The brand started a take-back program last year to give older pieces a second life. “For a while it was very daunting, it was piles of clothes,” she said, referring to her Irvington, New York factory where the collections are housed and sorted. Some pieces are resold in their original condition, while others are remade or “upcycled” as one-of-a-kind styles. “But as exciting as our take back program is, we only resell two percent of our clothes,” Fisher admitted. “We could do so much more and it’s a profitable model. Without having to create more clothes, we can employ more people and sell more clothes.”

“Circularity” was, undoubtedly, the biggest buzzword at the Summit and the concept was perhaps most passionately advocated by Dame Ellen MacArthur, whose namesake foundation aims to accelerate the coming of a truly circular economy. Since it launched in 2010, the organisation has examined the economic value of extending the lifecycle of products.

“[Today’s linear economy] is never going to win in the long term, because we are still going to run out of raw materials,” said MacArthur on stage. MacArthur’s foundation has focused on the plastic packaging industry which, like fashion, is vast and fragmented, and required collaboration with businesses, government and NGOs to tackle. “The volumes, like the fashion industry, are going up continuously,” she said. “If you get everyone in the room and you look at this as a challenge, can you actually start to tip the lever… Even after the difficult meetings, no one left the room.”

Creating a community of change makers is critical. “But there is a real need for an understanding of the system of organisations that play within the system, and not just the brands themselves, but the fibre manufacturers, the fibre re-processors, many of which are here,” MacArthur said. The foundation is working on a fibre report due in the autumn in partnership with H&M, Nike, the Sustainable Apparel Coalition, Fashion Positive and the Danish Fashion Institute.

Many fashion companies, which justify paying ‘poverty wages’ to garment workers, are in violation of international labour laws.

Meanwhile another report, seeking to accelerate change through legislative action, made its debut at the Summit. “Fashion Focus: the Fundamental Right to a Living Wage” makes a legal case for seeing a living wage as a fundamental human right. It was spearheaded by members of a women’s rights organisation called The Circle, which includes advocate Livia Firth, human rights barrister Jessica Simor QC and journalist Lucy Siegle. They say many fashion companies, which justify paying what they call “poverty wages” to garment workers by making a distinction between minimum wage and living wage, are in violation of international labour laws.

“The key conclusion is that the right to a minimum wage, which everyone has recognised for years now, is the same thing as a right to a living wage,” said Simor, who evaluated 14 garment industry hot spots where the minimum wage is significantly below the living wage. She found that the transparency reports of large apparel brands claim that in their defence, they pay the minimum wage. “They are… in breach of the UN guiding principles on business and human rights,” said Simor.

“This whole issue has never been looked through the lens of [the law],” Firth told BoF. “The countries have been put in a very difficult position because they are competing against each other for business… If we start regulating the same way as cartel laws and anti-competition laws and things like that, it’s going to be serious.”

“We have got the best professional eyes on this topic now, which we didn’t have before because it’s all been sector specific: us talking to each other, fashion advocacy [groups] getting statistics from fashion brands,” Siegle told BoF. “A lot of those data sets are completely flawed…We’ve been over-claiming on things like transparency instead of looking at these fundamentals.”

Now the organisation is aiming to crowdfund negotiations with governments, businesses and NGOs to implement the report’s recommendations and punish those who, they say, are violating international law.

As MacArthur advised at the end of her panel, “Work out what success looks like — and we can do that — and collaborate to make it happen.”

Disclosure: Chantal Fernandez travelled to Copenhagen as a guest of the Copenhagen Fashion Summit.

Sustainability Is Out, Responsible Innovation Is In