LONDON, United Kingdom — This week, interspersed among the usual selfies, #OOTD pics and ads that make up fashion Instagram have been some unusually sobering images: burnt out skeletons of former homes, shell-shocked and smoke-scarred residents, and kangaroos running for their lives, alongside pleas for donations and help.

Influencers, celebrities and fashion brands have taken to the social media site to highlight the devastation caused by wildfires that have raged across Australia for months, causing billions of dollars of damage, decimating wildlife and claiming more than 20 lives.

At the Golden Globes this Sunday, celebrities including Joaquin Phoenix, Russell Crowe and Ricky Gervais used their platform to draw attention to the ongoing crisis and its links to climate change.

The industry has a long history of coalescing around global causes, from apartheid and AIDS in the 1980s to, more recently, LGBTQ rights and gun violence. Activism is increasingly part of the marketing playbook, as consumers sync up their purchases to their politics. But the scale of the response to the wildfires demonstrates how climate change in particular is becoming a flashpoint.

“Because of the size of the areas affected, and the unforgettable images — children wearing masks to breathe, apocalyptic orange skies, houses reduced to piles of rubble and tin — not to mention the lost human lives, I do think we will see a greater focus on climate action from brands of all sizes as a result,” said Clare Press, Vogue Australia’s sustainability editor.

For the fashion industry, it’s a sobering glimpse of a potential future in a world that fails to tackle the climate crisis. Already, natural disasters are becoming more severe and more visible, with attendant economic fallout. In many cases, the impact has been worst away from fashion’s major retail hubs, sheltering the most visible part of the sector.

But if climate change worsens, that may not last.

“The catastrophic fires in Australia exemplify all too well the increase in dramatic weather events the fashion industry, and all other industries, face as we begin to feel the effects of climate change more acutely,” said Elisa Niemtzow managing director for consumer sectors at non-profit consultancy BSR, pointing out the significant risks to vital supply chains.

We will see a greater focus on climate action from brands of all sizes as a result.

From a commercial perspective, the full impact is still emerging. Moody’s Analytics anticipates the fallout will be worse than the Black Saturday fires in Victoria in 2009, which destroyed 450,000 hectares of land and cost an estimated A$4.4 billion ($3 billion). The current blazes have burnt 6.3 million hectares of land with direct economic costs expected to hit agriculture, tourism, household spending and worker productivity as a result of enduring air pollution, Moody’s Analytics said. Russell Zimmerman, head of the Australian Retailers Association, told ABC News in December that he expected to see the weakest Christmas spending in 11 years.

“We are expecting a knock-on effect,” the industry association’s head of public affairs and brand, Yale Stephens, said. “Prior to Christmas a number of people were looking to make donations to bushfire relief in preference to buying gifts.” 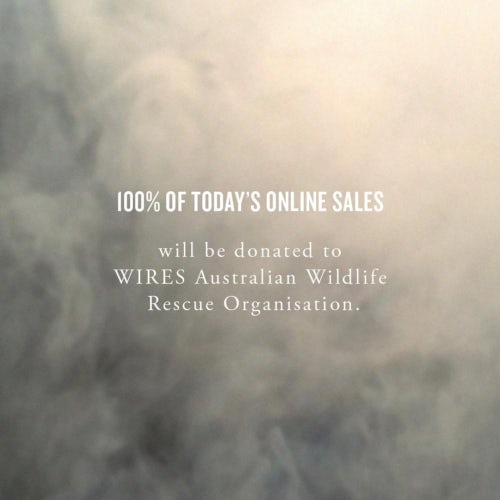 In the meantime, scrutiny on the industry is rising as climate issues become more prominent in the social discourse. Major fashion houses have leaned in, flexing their brand muscle to raise awareness and funds.

“It’s obviously too early to say how this will affect the retail industry, however our focus and priority is to use our position to provide immediate, and more importantly, long-term support for those in need,” said e-commerce fashion company Global Fashion Group, which runs online retailer The Iconic in Australia.

The Iconic is one of more than 30 major retailers to donate all of the profits generated on Thursday to the Australian Red Cross Disaster Relief Recovery Fund. It’s also set up drop off zones for donations at its headquarters and Western Sydney fulfilment centre, offering charities currently stretched to capacity additional storage space.

Others, including Faithful The Brand, Sass & Bide and Christopher Esber have committed to donating all of their proceeds from as much as a week of sales. There have been sizeable single donations too. Among others, luxury conglomerate Kering’s stable of brands, which include Gucci, Saint Laurent and Balenciaga are donating a total of A$1 million ($682,000) in support. Tommy Hilfiger and Calvin Klein-owner PVH contributed A$100,000 ($68,000) to the Australian Red Cross Disaster and Recovery Fund.

But the situation also requires the industry to take a long and critical look at its own practises.

It is time for change in all businesses, particularly fashion.

While wildfires are an annual occurrence in Australia, a hotter, drier climate is making things worse. The country is in the midst of a major drought, with the Bureau of Meteorology noting that last spring was the country’s driest on record. A heatwave in December broke the record for the highest nationwide average temperature; and the summer season is only just beginning.

“It’s great that people want to donate money, but we’ve got to stop reacting to the crises and think creatively and strategically about how to stop them in the first place,” said Helen Crowley, advisor on biodiversity and the new nature economy to the World Economic Forum and a fellow and senior advisor on resilient supply chains to the environmental nonprofit Conservation International. “There’s a series of catastrophes that are happening that are just tragic at every level… Its’ a warning that we can’t keep treating the earth in the way we have been.”

Fashion is a major player in the current climate crisis. According to the United Nations, the industry is responsible for 8 to 10 percent of global carbon emissions — more than all international flights and maritime shipping combined. The majority of clothes today are made from synthetic, oil-based materials and efforts to clean up the sector are moving slowly.

“These fires have prompted our industry to more deeply reflect on and understand the reality of climate change,” said Elizabeth Abegg, co-founder and chief brand officer at Byron Bay boho brand Spell. “It is time for change in all businesses, particularly fashion.”

How can you help?

Donations can be made to several organisations working toward victim relief and recovery, including the Australian Red Cross, as well as fired departments like the NSW Rural Fire Service, the Victoria Country Fire Authority and the South Australia Country Fire Service.

You can also help the devastated animal population by giving to wildlife protection groups like the RSPCA, WWF and the Port Macquarie Koala Hospital.

Related Articles:
Exactly How Bad is Fashion for the Planet? We Still Don’t Know for Sure

What’s Stopping the Fashion Industry from Agreeing on Climate Action