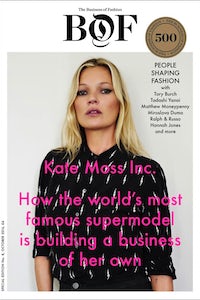 LONDON, United Kingdom — Compiling the BoF 500 — the definitive index of the people shaping the global fashion industry, now in its fourth year — is one of the most ambitious and exciting projects that our team undertakes each summer. Indeed, while much of the fashion world is on holiday, we are busy gathering intelligence and sifting through the hundreds of nominations we receive each year from current BoF 500 members around the world, not to mention planning our annual BoF 500 gala dinner in London and developing online profiles for new entrants to the list.

But the best part is getting to know the people we select to feature in our annual BoF 500 special print issue. Again this year, we have taken a veritable tour of the world, bouncing from the office towers of Tokyo to the shopping malls of Mumbai, even stopping off on a tiny island in Greece, where I arrived by a combination of plane, catamaran and water taxi to meet the supermodel Kate Moss for her first ever business interview.

Over the years, Moss has stuck to her motto “never complain, never explain” and rarely gives interviews about herself. Indeed, she has long believed in the power of silence. Meanwhile, life in the near-constant glare of the media over the last 27 years has taught her that her every utterance will be ruthlessly dissected and turned into sound bites, often taken out of context, simply to fuel the frenzy of attention and speculation that surrounds her. But 2016 has been an important year of change for Moss and she made an exception to her longstanding policy, giving a candid and wide-ranging interview to BoF.

In a global exclusive — ‘Kate Moss Inc: How the world's most famous supermodel is building a business of her own,’ with photographs shot by Nikolai von Bismarck and styling by Moss herself — the supermodel reveals that since surprising the industry by leaving her longtime agency Storm Models, she has been quietly setting up her own talent agency and building a lifestyle business around a slew of forthcoming Kate Moss-branded products.

Another globally recognised woman on a mission is Tory Burch, whose business is now said to turn over $1 billion in annual revenue. Not content with scaling just one brand, however, Burch has recently turned her attention to Tory Sport, her new activewear venture, complete with its own collections, stores and e-commerce site. Can the new line become another billion-dollar brand?

As they build their new businesses, both Moss and Burch may want to study the 23 management principles of Tadashi Yanai, Japan’s richest man and the chairman, president and chief executive of Fast Retailing, parent company of Uniqlo. Written one-by-one over the years, these principles comprise the corporate belief system that enabled Mr Yanai to grow a single men’s tailoring store into one of the most admired global fashion businesses in the world, turning over more than $15 billion per year. For this issue, the entrepreneur invited BoF into his Tokyo office to discuss what we call the ‘Yanai Doctrine.’

The issue also contains remarkable stories like Nike’s journey from sweatshop scandals to seeing sustainability as a tool for innovation, as told by chief sustainability officer Hannah Jones; an interview with Russian new media maven Miroslava Duma; and a telling of the unlikely rise of London-based couture business Ralph & Russo. We also examine the Indian fashion market, a great new hope for executives stuck in a global growth rut, and Matthew Moneypenny’s super-agency Great Bowery, which is fusing fashion and entertainment with a strategy borrowed from Hollywood.

Also contained in the issue is our collectible BoF 500 directory for 2016, highlighting this year’s 113 new entrants, as well as the complete list of the people shaping the global fashion industry, which I invite you to explore in more depth here.

To order your copy of BoF's fourth annual BoF 500 special print edition, with delivery anywhere in the world, visit shop.businessoffashion.com.