SHANGHAI, China — There are few places that arouse a more visceral reaction to the environment than China’s biggest cities. A mere glance out the window of a shiny new skyscraper in downtown Shanghai, Beijing, Guangzhou or Shenzhen is enough to understand the reality of unchecked environmental degradation.

For many of China’s urbanites, daily conversation with friends and colleagues often revolves around something called PM 2.5 levels, which is a fine particulate matter small enough to penetrate deep into a person’s lungs, with a “good” day showing a reading under 150 and a “bad” day reaching over 250. Here, people speak of air pollution the way people in other countries talk about the weather.

A decade of poisoned food and water scandals and unbounded mass manufacturing to fuel economic growth has culminated in Beijing’s now seasonal “airpocalypse”, a term coined in 2012. Since then, China’s central government and party leaders have worked hard to promote environmental stewardship as a national priority.

Most famously, President Xi Jinping — who is about to start his second five-year term — was a vocal supporter of the Paris Agreement on climate change, following US President Donald Trump’s announcement that the world’s largest economy would not honour the accord, leading many to question whether China is the new sustainability superpower the world should be looking to for leadership.

China certainly has a long way to go before it can legitimately claim the environmentally friendly upper hand. Take the textile industry as a snapshot. According to Green Initiatives, a non-profit focused on environmental education and solutions in China, 53 percent of the world’s textile production waste comes from China, an estimated 70,000 tonnes every day, with 2.5 billion tonnes of polluted waste water produced annually.

To combat this, the Chinese government’s 13th five-year plan for economic and social development, released in 2016, set a target of 4.5 million tonnes for recycled textile production by 2020. “Since the US has seemed to step away from that, China is really stepping to the forefront, which makes it a very interesting place to be right now,” says Michael Beutler, Kering’s sustainability operations director.

Beutler will speak about these and other issues at today’s BoF China Summit in Shanghai, supported by principal partner MyMM.

The Chinese consumer is clearly waking up to sustainability issues too. According to a report released in August by the China Chain Store and Franchise Association, having surveyed almost 10,000 consumers in ten Chinese cities, more than 70 percent of respondents agreed that “personal consumption has a direct impact on the environment.”

"Safety and health" was the top reason for choosing sustainable products and services, while environmental friendliness and quality were the next two most popular reasons.

Sustainability is prominent on the agenda of the government and consumers, but when you have a candid conversation about sustainability with fashion business leaders in China, the refrain is all too often the same. Apart from a few very notable exceptions and specialist brands, most insiders will confide that they simply “don’t care”.

“The majority of Chinese fashion people are not talking about it or they’re not at all interested in sustainability. Collectively, our fashion industry isn’t doing nearly enough and the fashion media isn’t doing anything about it either. So, naturally the fashion consumer is going to be left uneducated and unaware about our industry’s unique sustainability issues,” says Shaway Yeh, group style editorial director of Modern Media Group.

The silver lining is that you don’t see quite as much greenwashing and posturing here.

“There are a few young fashion entrepreneurs here who are genuinely committed to the cause and other exciting people who are in the R&D stage of things. But getting the rest of our industry up to speed will require a lot of work. I guess the silver lining is that you don’t see quite as much greenwashing and posturing here as you do in the West. Here’s hoping we can leapfrog ahead and skip that tedious stage,” she adds.

Yeh first decided to step into the leadership vacuum by using her editorial medium — Modern Weekly magazine — to start a column about sustainable fashion. She then began collaborating with global fashion and luxury companies like H&M and Kering. Other major global brands told her they had tried to broach sustainability with the Chinese fashion media, but had been rebuffed.

After speaking at this year’s Copenhagen Fashion Summit, Yeh launched her agency called Yehyehyeh to help bring sustainability to the forefront of China’s fashion eco-system. 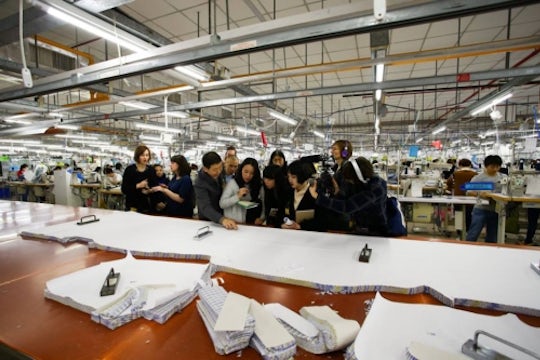 “The problem is that too many people here view sustainability in isolation. That’s why my approach is to package it as part of a holy trinity. When you combine sustainability principles with tech innovation and truly artistic creativity, that’s when you start to make progress and get real sustainability dividends,” says Yeh, who counts China’s giant cashmere brand Erdos as a client.

While a lot more awareness and education is needed, consumers are gradually waking up to the impact of fashion consumption. According to Christina Dean, founder of Redress, a Hong Kong-based environmental NGO working to reduce waste in the fashion industry, “the fantastic news for the world is that the upper middle class are definitely transforming the way the ethical fashion market will progress in China.”

But according to Green Initiatives’ Nitin Dani, the picture is more nuanced and complex. “[Chinese consumers] are starting to care, especially after they have kids, but you ask someone earning 5,000 RMB ($750) per month and he doesn’t care,” he says.

The upper middle class demographic to which Dean refers currently stands at eight percent of China’s population, but data from Euromonitor suggests it will grow to 31 percent of the population by 2030. It’s this cohort of big spending, quality-seeking consumers that are projected to double the value of China’s apparel retail market from 2015 levels of $275.2 billion by 2030.

A 2016 report from Cotton Council International and Cotton Incorporated, specifically looking at the upper middle class Chinese consumer, found that 62 percent of people in this category would actively seek out sustainable apparel, compared to 50 percent of mass market consumers and 39 percent of “poor” consumers.

Shanghai Fashion Week (SFW) is keen to expand its eco-credentials. The event’s vice secretary general, Lv Xiaolei, was an early proponent of sustainability initiatives and has partnered for several seasons with Candy Li who is the founder of Green Code, a showroom featuring brands with varied focuses on sustainability.

The bi-annual fashion week, which runs October 11 to 18, has built a name for itself over the past five years as a promotion vehicle for the best of China’s independent fashion design and has featured labels such as Ffixxed Studios, who won the Yoox.com Asian Sustainable Fashion Award in 2015 for their focus on minimising wastage in the manufacturing process, recycling fabrics and focusing natural fibres.

This edition of SFW will see major luxury players get in on the act as well. Kering’s Beutler will join Shaway Yeh and Elaine Yan Ling Ng of The Fabrick Lab on 14 October for a workshop dubbed Kering’s Innovative Luxury Lab. This will be followed by an event the next day hosted by Yeh and Kering to raise awareness about fashion sustainability among Chinese fashion designers.

Kering Group, whose portfolio includes Gucci, Balenciaga, Saint Laurent and Stella McCartney, was last month recognised for the third time by the Dow Jones Sustainability Indices as the industry leader for the textiles, apparel and luxury goods sectors for its global program. In part, the global programme targets fashion students and designers at schools such as Parsons and China’s Tsinghua University.

“The reason we’re looking to Shanghai Fashion Week is because those designers are the designers of tomorrow. Maybe some of them are designers of today, but they will be the big names of tomorrow and it’s important to infuse as much of the knowledge that we have right now, helping shape the industry to create a sustainable way of thinking,” says Beutler.

It’s important to infuse as much of the knowledge that we have right now.

Yeh would like to see big international companies do more to promote a sustainable fashion message in China, and believes it’s a move that would do more to help their bottom line in what is soon expected to be the world’s largest apparel market. “H&M do so much abroad, but they are not as aggressive or active in China,” she claims.

Hanna Hallin, Greater China sustainability manager for H&M, rejects the claim that the Swedish fast-fashion retailer focuses less on their sustainability initiative in China compared to other markets, pointing out that every section of H&M — women’s, men’s, kidswear and accessories — features a green-tagged assortment of items made from sustainable materials. “Chinese customers say that they actively look for it in our stores,” Hallin says.

She does agree, however, that the marketing of sustainable fashion is aimed slightly differently at Chinese consumers, for whom product safety and environmental concerns trump labour conditions, supply chains and animal rights. The latter tend to be more prominent in H&M’s messaging to US and European consumers.

One brand towers above the rest

Given the recent drive towards sustainability from China’s government, fashion industry, media and consumers, the brand story of Icicle — a homegrown sustainable fashion brand celebrating its twentieth anniversary this year and also showing at SFW — might come as a surprise. 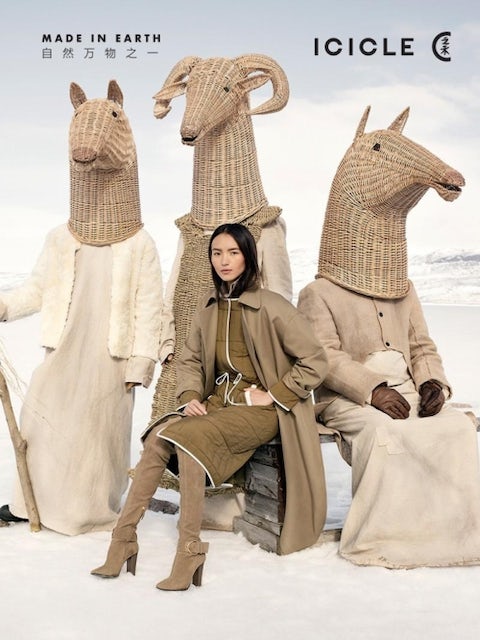 Icicle’s president Shawna Tao admits that the first decade of the brand’s life was largely devoted to educating consumers about the benefits of natural fibres and the advantages of vegetable dying and tanning, but a proliferation of food safety scandals in 2008 turned the tide for the company.

“In 2008, the milk powder poisoning [in which melamine-tainted infant milk formula led to the deaths of six babies and the hospitalisation of 54,000 more] made people go to the next stage, so people were more focused on safety. From that year, Icicle’s business grew very fast, because the customer started to take it seriously,” she says.

Today, the brand boasts 200 stores and three factories in Mainland China, with 2,000 employees, and an anticipated retail turnover for 2017 of 1.6 billion RMB (about $242.5 million). There are also plans in the works for a Paris store to open in 2019, following the launch of a design centre in the French capital in 2012, where Icicle’s top-tier collection is conceived.

Though there is plenty of data to show that Chinese consumers, particularly those at the younger and wealthier end of the spectrum, care about sustainable fashion, there are no convincing numbers to quantify how much they care, or how much weight is given to sustainability in fashion purchasing decisions.

Tao sees a turn towards sustainability in Chinese fashion consumer culture as a return to the norm, rather than a new development. Shecites the importance of Confucian ideology in Chinese culture as a driver for sustainability to become more prevalent in fashion consumption: “Now, short-term, people want to show off but I think this stage will pass. In the blood of Chinese culture, less is [considered] more elegant.”

“People from overseas are so surprised to hear of a sustainable brand growing in this market, they just think of China as mass market and pollution. This isn’t our culture — this is Western culture that we have adopted because Western culture has been winning for the past 200 years. But I think Chinese people will pass through this stage more quickly than the West. It’s in our nature to be more sustainable,” she adds.