IRVINGTON, United States — Inside an unassuming industrial red-brick building along the Hudson River, about an hour north of Manhattan by train, Eileen Fisher is quietly doing something radical. In different stages since 2009, the company has built the foundations of a circular supply chain that reuses materials and turns waste into the building blocks of new products, inside a year-old workspace called the Tiny Factory.

Most fashion businesses employ a linear production model: make, use, dispose. According to a new report from the Ellen MacArthur foundation entitled “A New Textiles Economy: Redesigning Fashion’s Future,” less than one percent of material used to produce clothing is recycled and turned into new clothing. The global textile industry relies on 98 million tonnes of non-renewable resources each year and 87 percent of total fibre input used for clothing is incinerated or sent to landfills, representing a loss of more than $100 billion annually. Indeed, in addition to being extremely damaging to the environment, fashion’s largely linear production system — which generates more greenhouse gas emissions than all international flights and maritime shipping combined — is also economically inefficient. 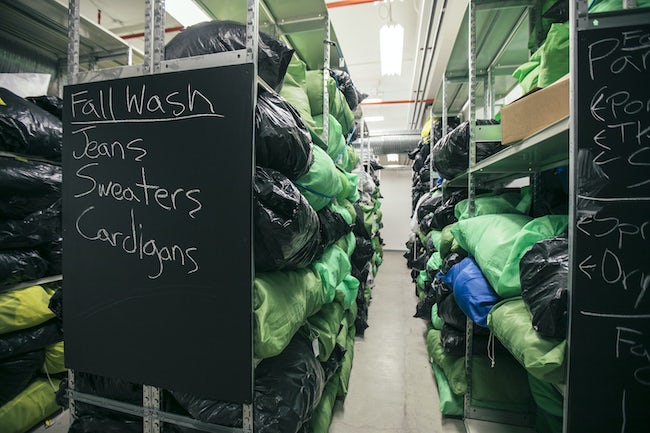 Renew product ready to be sold inside the Tiny Factory | Source: Courtesy

A circular approach, which aims to use resources for as long as possible, extracting maximum value from them, and then recovering and regenerating products and materials at the end of each life cycle, is challenging to implement.

In addition to the actual recycling process, which is costly, there are two central obstacles, according to MacArthur’s report. First, brands must be able to harvest adequate raw material from consumers to make a circular production system scalable. And second, they need an audience willing to buy that product. Eileen Fisher says it is uniquely positioned to overcome both these obstacles.

Since Fisher founded the independent contemporary brand in 1984, it has delivered easy silhouettes in natural fibres, inspired by Japanese design, that have eschewed the trend-driven fashion churn. And it has since grown a large loyal fanbase and extended its distribution to over 1,000 wholesale doors and 68 retail stores.

But it wasn’t until 20 years after its founding that the company started formally articulating its commitment to environmental sustainability in product and practice through written mission statements and internal task forces. In 2009, it launched a clothing take-back program and was surprised to soon find its recycling centres in Irvington and Seattle (opened in 2013) flooded with garments from consumers who had held on to the pieces over the years. The brand has collected over 900,000 garments to date.

“I'm a believer that we have to take responsibility for the stuff we put out there, and we have to take responsibility for how it is made,” Fisher tells BoF nearly one year after the Tiny Factory — over 21,000 square feet of workspace for sorting, storing, selling and remaking reused Eileen Fisher garments — opened in early 2017. “It points back to our materials — when you start with quality materials that are sustainable, whatever you create is beautiful, you feel the integrity of it,” she says.

The Tiny Factory was born out of necessity. The brand previously had a smaller portion of the building and was running out of space to sort and repair reclaimed garments. “When we were laying out [how we could] take this factory, I was desperately trying to justify it,” says Fisher. The company ended up justifying the decision by incorporating a storefront and closing a storage area in New Jersey and merging it into Irvington. “I knew in my heart it was the right thing,” she says.

“The circular economy is what everyone wants to talk about right now, and it felt like a great opportunity [to tackle],” says Cynthia Power, facilitating manager of Eileen Fisher Renew. She adds that, the brand’s passion for sustainability aside, there are practical considerations to consider. Namely, the world’s raw materials are finite and will increase in price over time. Devising a way to offset that future cost offers the brand an important long-term competitive advantage. 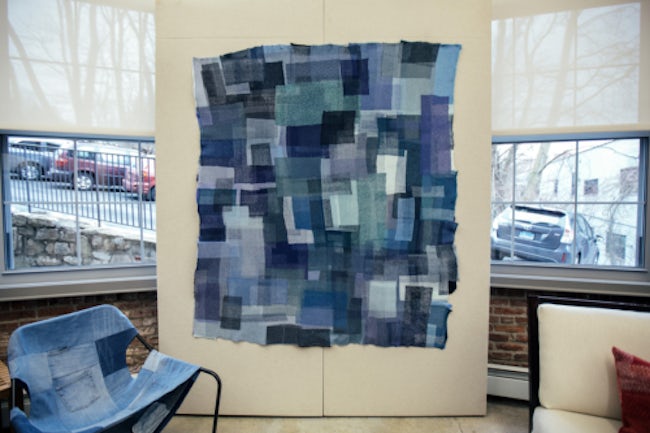 A felted wall hanging at the Tiny Factory | Source: Courtesy

The Eileen Fisher team had already started figuring out, with some trial and error, how to process the overwhelming amount of donations before the Tiny Factory opened. Much progress was made with the help of post-graduate winners of the CFDA Eileen Fisher Social Innovator Award, who spent a year in residency at the company between 2015 and 2016. (One winner, Carmen Gama, has stayed on as the Tiny Factory’s head Resewn designer.) And the Lean Enterprise Institute provided conceptual support on the garment flow from recycling centre to end product.

“What’s the best use for these garments? Every day we are learning and trying to improve the system and make it more efficient,” says Carolina Bedoya, the inventory and design associate overseeing the Resewn project, which includes the production of new garments from old ones that cannot be mended, over-dyed or, in a still experimental approach, felted into a new fabric. Before the CFDA residents arrived, Bedoya sorted everything by fibre and stitch (knits or wovens). But it became clear that the designers needed more information — a breakdown by style — in order to scale production. “It helps that we’ve used the same fabric for many years,” says Power, citing a stretched silk fabric as an example.

While the team keeps tweaking its approach, the sorting and production process is largely in place. First, a team sorts through bins of received garments, for which customers receive $5 each. The majority of that inventory, 55 to 65 percent, is deemed ready to be resold at a reduced price as part of the Eileen Fisher Renew collection, after being sent to the cleaners. A $250 jacket, for example, has a second life on the sales floor at $90.

In 2016, the company saw sales of $2.5 million to $3 million of the Renew collection, generating a profit of $200,000 to $300,000. (Eileen Fisher’s annual revenue is between $400 and $500 million.) Tops and sweaters, where fit is more forgiving, are the most popular, while pants are trickier to sell. But the distribution is still limited. The Renew collection is available at the Tiny Factory’s own small storefront, the Lab store around the corner in Irvington, Eileen Fisher stores in Seattle (which is expected to sell $1 million worth of Renew pieces this year), New York, Northampton and online at EileenFisherRenew.com.

The Renew collection is not only smart business and good for the planet: it has also opened up Eileen Fisher to a younger audience. “Price is an issue, a barrier, for us too and we see [resonance] with the Renew basic resale pieces,” says Fisher. “Philosophically is really where you can hook [the younger consumer]. She really likes that we are doing this and she can feel good about shopping here… We definitely think it’s a pathway.” 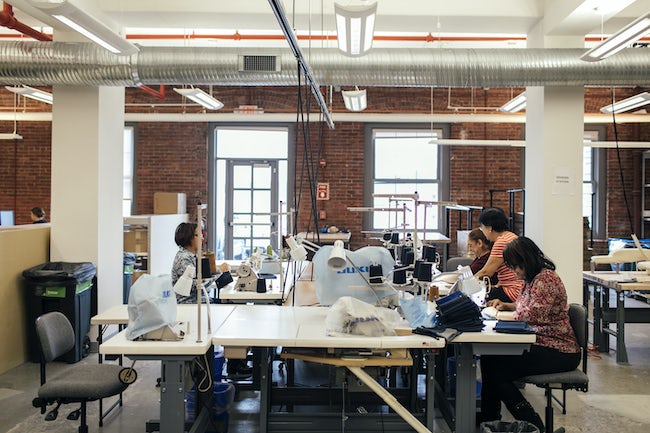 Inside the Tiny Factory | Source: Courtesy

But what about the other 40 to 45 percent of reclaimed garments, which arrive stained, stretched or damaged? Back at the Tiny Factory, they keep getting sorted. (Also, the most common damages to garments are noted in order to inform the production of future main line collections and to facilitate their future reuse.)

Some of these pieces may require simple mending, others might just need to be over-dyed to hide a stain or flaw in the colour, particularly if the product is made of silk or linen. And then finally, much of the rest is sorted by fibre content, construction, colour and then style in order to be used as raw material for the production of new garments.

Further inside the Tiny Factory, in an open workshop space behind the store, Gama and a team of sewers and cutters use one of two techniques to produce new pieces. The first is called engineered patterns: they adapt existing Eileen Fisher patterns to the materials available. One tunic, for example, might be made from the usable fabrics of three pants, with varying placements of seams. The second option is what they call yardage, or patchwork: damaged pieces are cut into squares and sewn together before being treated as normal fabric in the cutting and sewing process.

The results are often one-of-a-kind, such as a patchwork velvet tunic dress or a chunky sweater with an abstract collage of textures in complementary colors. “There are no two identical pieces,” says Fisher.

These methods don’t account for all damaged garments, about 100,000 of which have been donated so far to women’s shelters, art schools and disaster relief efforts. Elsewhere, bins of labels, buttons and zippers are collected and returned to Eileen Fisher’s factory partners for use on the mainline or for repairs.

But perhaps the most exciting solution to seemingly unsalvageable garments and scraps is felting, a process by which fabrics are shredded and layered into a type of fluffy textile typically used for architectural insulation or upholstery. In 2015, Eileen Fisher bought a $20,000 felting machine from a vendor in Kentucky that has proven to be an essential piece of machinery for the Tiny Factory. The technology is becoming more popular for recycling fabrics and is a fertile tool for experimentation.

Waste can be art. It’s a statement about the possibilities.

In addition to creating one-of-a-kind felted coats in an array of layered colors (that can cost as high as $2,000), the brand is playing around with creating felted decor including pillows, rugs and wall hangings, a selection of which, designed by Bedoya and Eileen Fisher DesignWork creative director Sigi Ahi, were exhibited at the Lisa Cooley Gallery in the Lower East Side in September. “Waste can be art,” says Fisher. “It’s a statement about the possibilities.”

While the Renew product is generating profit, the resewn and felted pieces are “still in start-up phase,” says Fisher. “We’re getting a lot of other value...We believe we are on the right path. The excitement around it makes us feel like we have an idea and [we're thinking about how] we can keep working with it and building it, so it actually works.”

Expanding distribution is a key priority for the brand right now. It has more product than avenues for sale. Inside the Tiny Factory, over 100,000 Renew pieces are currently stored in green laundry bags, ready to go. A new partnership with Nordstrom aims to address the problem. In September, Eileen Fisher opened a series of Renew pop-ups at five Nordstrom locations across the country, focused on the west coast and midwest.

In Spring 2018, Eileen Fisher plans to open a new store location in the Boerum Hill neighbourhood of Brooklyn to highlight the brand’s entire offering — new, recycled and renewed — much like the brand’s experimental Irvington Lab store. There, Fisher has found that that the clearer the connections between the new seasonal collections and the Resewn pieces, the higher the sales. Increasing communication between the mainline designers in Manhattan and the Tiny Factory designers in Irvington is another priority. Despite the brand’s progress thus far, Fisher knows there is still much more work to be done.

“At the end of the day we are still a relatively small company, and even if we were to become completely closed loop or circular, it’s not enough,” says Power.

“Let’s change the industry, let’s work together, let’s share what we know,” adds Fisher. “When we see what’s working, we like to blow it up. I’ve always been pulled by that energy.”

In Copenhagen, Gearing Up for a Circular Fashion System

The Power of Circularity: 'Let's Raise the Level of Ambition'