The leather-goods powerhouse is testing alternative materials in a break with tradition, reimagining its ‘Victoria’ travel bag in a lab-grown substitute. 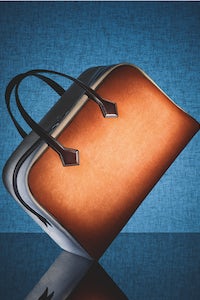 The leather-goods powerhouse is testing alternative materials in a break with tradition, reimagining its ‘Victoria’ travel bag in a lab-grown substitute.

Hermès is synonymous with classic luxury — a brand that barely strays from its iconic calfskin bags and silk scarves. But in a new, unlikely collaboration, the French maison is breaking with tradition and turning to a leather-like material grown in a lab.

The brand’s “Victoria” travel bag has been reimagined in canvas, elements of calfskin and Sylvania, an amber-hued material Hermès has developed in partnership with MycoWorks, a California-based start-up that has developed a patented process to turn mycelium — a network of threads from the root structure of mushrooms — into a material that imitates the properties of leather.

The new bag will be available by the end of the year and is intended to add a new offering, alongside Hermès’ more classic materials. It will not replace them, Hermès said in an emailed statement.

The move reflects a broader shift in the luxury market, as fashion’s most high-end players grapple with a changing consumer base. Already many, including Chanel, Gucci and Burberry, have abandoned fur or exotic skins. Gucci chief executive Marco Bizzarri famously labelled fur “a little bit outdated.” Hermès continues to sell crocodile Birkin bags.

However, new materials are also gaining traction, even within the established traditions of the luxury market, as sustainability rises on the agenda. For instance, Chanel has invested in green chemistry firm Evolved by Nature, with an eye on replacing harsh chemicals used to enhance the performance, look and feel of materials.

Imitation leather in particular has been a growing area of interest.

While leather is a luxury staple, it is typically a resource-intensive process, involving vast amounts of water, land and energy to rear cows and potentially hazardous chemicals to treat and dye the hide.

Plastic-based faux leather has long been available (a vegan, but not necessarily sustainable option), as have alternatives made from organic materials such as pineapple. But mycelium appears to be particularly on-trend.

MycoWorks, the company Hermès is partnering with, closed a $45 million series B funding round last year led by Taipei-based WTT Investment Ltd. and venture capital fund DCVC Bio, with additional investment from Natalie Portman, John Legend and several unnamed “major fashion brands.” Its Fine Mycelium material can be grown to size in the lab and further honed during the cultivation process.

Stella McCartney and Gucci-owner Kering are among a consortium of companies to partner with Bolt Threads, a rival maker of a mushroom-based leather-like material. The group plans to roll out products incorporating the material, Mylo, this year.

Hermès has proved an under-the-radar competitor with its bet on MycoWorks’ material. The brand has not been as vocal as rivals like Gucci regarding its commitments on sustainability. But the long life cycle of its products — known for durability and timeless style, fetching top prices on the resale market — has boosted its appeal among consumers seeking to avoid disposable fashion. With a mushroom leather offering, Hermès appears to be addressing conscious consumers more directly.

“MycoWorks’ vision and values echo those of Hermès: a strong fascination with natural raw material and its transformation, a quest for excellence, with the aim of ensuring that objects are put to their best use and that their longevity is maximised,” Hermès artistic director Pierre-Alexis Dumas said in a statement. “With Sylvania, Hermès is at the heart of what it has always been: innovation in the making.”

Why Big Brands Are Investing in Sustainability Start-Ups

How the Climate Crisis Is Reshaping Luxury