For years, large fashion businesses saw sustainability through the lens of CSR (Corporate Social Responsibility). Being sustainable was about taking responsibility for a company’s negative social and environmental impact, often to mitigate a public relations fallout. In some cases, concerns about sustainability gave rise to “greenwashing” whereby PR and marketing levers are used to further a false perception that a company’s actions are eco-friendly. But fashion’s approach to sustainability is maturing fast.

Consumer behaviour will ultimately be the key impetus for fashion companies to change their ways. Whether consumer concerns about sustainability actually drive purchase behaviour remains debatable. Sustainability is certainly a less influential driver of product preference in fashion than in markets like food, where the benefits of organic vegetables, for example, are felt much more directly by consumers.

That said, there’s little doubt that more and more consumers, especially members of the Millennial generation, are saying that sustainability matters. In a recent poll of 10,000 consumers in 11 countries by The Boston Consulting Group, sustainable means of production was the second most important consideration after the exclusivity of a brand. And there is mounting evidence that sustainability is also an important lever in attracting young talent. What’s more, sustainability can help drive innovation as well as unlock business efficiencies and boost profitability.

French conglomerate Kering, whose corporate identity is linked to the idea of “caring”, has made particularly bold commitments to reducing environmental impact by at least 40 percent by 2025 and developed what it calls “EP&L” (Environmental Profit & Loss) to quantify the impact of its actions and “put sustainability issues in the language of business,” in the words of Kering's sustainability operations director Michael Beutler, speaking at the inaugural BoF China Summit in Shanghai on Wednesday. China is a key sustainability focus for Kering because of the sheer scale of the country, as well as its growing leadership on climate change and the pace of sustainability innovation in the market.

Kering megabrand Gucci, which this week went fur free, has also devised an ambitious 10-year “Culture of Purpose” sustainability plan, built around three pillars: environment, humanity and new models. As part of the plan, the label has committed to guarantee the traceability of 95 percent of its raw materials, enhance the lives of the people who make its products and apply technology innovation to improve efficiency in production and logistics.

LVMH, for its part, has developed a framework it calls LIFE (LVMH Initiatives for the Environment), a “strategic backbone” for programmes that address nine environmental challenges. Each of the group’s brands must now include a LIFE component in strategic business plans, with sustainability targets and actions laid out for the next five years.

But Kering’s approach goes even further. Back in 2016, the company developed an app for iOS and Android called “My EP&L” which enabled users to visualise the environmental impact of fashion products along the supply chain, from raw materials to finished goods. This week, the company is set to launch a WeChat app to share its EP&L tool with the Chinese fashion industry. Beutler called the new app an “open innovation concept” and indeed the company has made the important decision to share or “open source” its approach to sustainability, providing a target audience of students, emerging designers and the wider industry with an important tool to take sustainability into account in their design process. “We even open source to our competitors because it really helps luxury overall,” said Beutler.

Kering’s app follows in the footsteps of Nike, which has also developed “open source” solutions to help designers make more environmentally and socially conscious products. Notably, the American sportswear giant has transformed its internal sustainability materials library into an open resource to aid third parties to select fabrics based on their environmental footprint.

But much like Kering’s approach, it’s not all about altruism. Nike hopes that greater demand for sustainable materials will lead to greater and cheaper supply. In the luxury industry, too, an open-source approach to sustainability is the best way to turn a wave of change into a rising tide that will lifts all boats.

Gucci bans fur use. The Kering-owned brand has signed up to the Fur Free Alliance organisation, and joins Calvin Klein, Ralph Lauren and Armani in removing fur from its collections. Gucci chief executive Marco Bizzarri says fur products are worth about €10 million ($11.8 million) to the company annually. These will be replaced with products made of faux fur, wool and new fabric innovations. The anti-fur strategy appeals to ethically minded millennials, who make up more that half of Gucci’s customer base.

Supreme confirms investment. The streetwear brand launched by James Jebbia in 1994 has a new investor: sources confirmed that private equity firm The Carlyle Group acquired about 50 percent of the company, which is now valued at over $1 billion. Carlyle is thought to have bought out Supreme’s previously undisclosed investor, Goode Partners, which first took a minority investment in the company in 2014. What Carlyle’s position in the business will mean for Supreme has yet to be seen, but driving growth while maintaining street cred will be a challenge.

JD.com launches luxury site. The Chinese e-commerce giant will launch Toplife, a personalised luxury platform hosting brands such as Trussardi, Rimowa, Emporio Armani and La Perla. It will act as a gateway for many western brands to break into the country’s lucrative — but difficult to crack —luxury market, which accounts for a third of global luxury sales. Toplife will utilise JD.com’s network of 250 warehouses across the country to tackle the infrastructural and logistic challenges of goods delivery in China.

Coach Inc. rebrands as Tapestry Inc. The budding “modern luxury” group — which owns Coach, Kate Spade and Stuart Weitzman — will change its name to Tapestry, effective October 31. Chief executive Victor Luis said the shift is designed to clear up consumer confusion and signal to Wall Street that the company is a growth platform for current and future brands, which may not be limited to American brands. Media company WME-IMG also rebranded as Endeavour this week.

Neiman Marcus revenue slips. The company reported total revenues of $1.12 billion, a 0.5 percent decrease on the fourth quarter of the 2016 fiscal year. The results mark the Dallas-based company’s 10th consistent sales decline, although the decline in revenues is slowing down: sales fell 4.9 percent in the third quarter. Online sales however — which represent 30 percent of the company’s overall revenue — were up 9 percent, to $363 million.

Walmart predicts online sales boom. The US retail giant’s shares rose 2 percent following the announcement that domestic online spending is predicted to rise 40 percent within the next two years. It follows strong second-quarter results, with 60 percent growth in the US. After acquiring Jet.com last year, Walmart continues to expand, adding Modcloth, Moosejaw and Bonobos to its portfolio of e-commerce players. 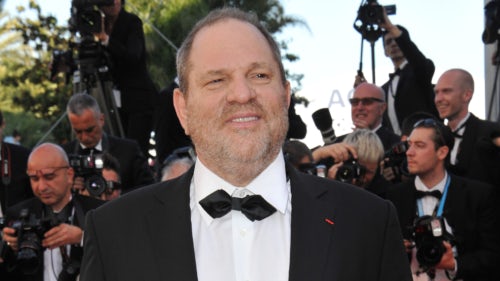 More reports of Harvey Weinstein’s abuse made public. For almost three decades, the film producer and studio executive’s inappropriate advances towards women were widely known but never publicly reported. However now accounts of harassment, assault and even rape have been reported by over 30 women — including Cara Delevingne. Weinstein’s wife Georgina Chapman, founder of the Marchesa fashion label, announced this week she will leave the disgraced film mogul. Meanwhile, Weinstein has been fired from his company.

Donna Karan criticised for defending Harvey Weinstein. In a filmed red carpet interview with the Daily Mail, the fashion designer appeared to suggest that women were “asking for” sexual harassment based on their choice of attire. Karan later retracted her statement, suggesting her comments were taken out of context.

Adrian Cheng launches C Ventures. The Hong Kong-based entrepreneur announced an “investment club” with an eye on youth culture that aims to develop a “cultural ecosystem” of properties targeting Millennial and Generation Z consumers, who, according to according to Bain & Co., will account for 45 percent of global luxury spending by 2025. The announcement formalises a strategy Cheng has pursued over the last decade by investing in new-model businesses such as Dazed Media, Bandier and Beautycon. Unlike a traditional fund, C Ventures has no investment limit or certain amount of capital raised. Media financier Clive Ng is Cheng’s business partner.

Giorgio Armani speaks strategy. The designer outlined his thinking behind the Armani Group restructuring, which will see the company’s brand portfolio streamlined into three distinct labels: Giorgio Armani, Emporio Armani and A|X Armani Exchange. The intention is to simplify the business in a bid to lift sales as revenues continue to fall; sales were down 5 percent at the Armani Group in 2016, to just under €2.5 billion ($3 billion). The ready-to-wear and couture lines will live under the Giorgio Armani umbrella, while A|X Armani Exchange will now sell denim.

Rihanna’s Fenty Beauty on track to make $100 million in its first year. Backed by the LVMH-owned incubator Kendo, the range is hailed as the most racially diverse brand in the beauty industry. All 40 shades in Fenty Beauty’s Pro Filt’r foundation offering sold out almost immediately after launch in 17 territories. The frenzy only highlights how many women are underserved by many traditional beauty brands that fail to cater to a expansive range of skin tones.

British Glamour editor-in-chief Jo Elvin steps down. The news comes as the publication announces a new digital-first strategy, that will see its print magazine shift to a biannual schedule. Condé Nast confirmed that the editorial and commercial teams will be combined, resulting in a yet-to-be-determined number of job losses. In its new iteration, British Glamour will be mobile-first, and will refocus as an online beauty platform.

Alibaba to spend $15 billion in tech development. The e-commerce giant will double its research and development spending over the next three years, setting up seven research labs and hiring over 100 scientists to develop next-generation technology including artificial intelligence and quantum computing. The program should help the $469 billion behemoth keep pace with Amazon, and push China to become a global leader in AI.

Apple patents self-adjusting Apple Watch. The automatically adjusting band will automatically tighten or loosen to perfectly fit the wrist. Implementation could occur through shape memory wire or retractable lugs into the body of the watch. Meanwhile, the wearable-tech market struggles to find its footing amid a sales slump.