LONDON, United Kingdom — When Simon Porte Jacquemus sent a parade of models down a hot-pink runway in June, he staged a show that launched 1,000 clicks.

The images of sun-drenched Provençal lavender fields shot through with a high-octane dose of fashion immediately went viral. But lost amid the show’s maximum media impact was its minimalist environmental footprint.

“It was absolutely as low impact as can be,” said Alexandre de Betak, the in-demand events producer responsible for putting together Jacquemus’ viral sensation in the South of France.

To stage the show, all that was required was a long strip of vibrant pink carpet, a single line of benches and a few speakers. “There were no lights; the light was the sun,” de Betak said. Less than a quarter of the audience were fashion influencers or journalists who had travelled to be there. And most of those had only come from Paris; a much shorter trip than the standard trans-Atlantic and trans-Pacific jaunts that have become par for the course for the average fashion week show.

“We really hoped it would help every designer and brand see you can do it like that,” de Betak said.

Our world of fashion and luxury won’t survive well if it doesn’t apply a major revolution.

De Betak is one of a generation of specialist producers, which also includes Etienne Russo of Villa Eugénie and Julie Mannion of KCD, who helped transform the way modern fashion shows are staged, turning them from staid showcases into multimedia extravaganzas.

But after decades producing some of the industry’s most opulent and memorable events — a man-made mountain blanketed in delphiniums for Dior in 2015; a foiled runway backed by a silver wall of balloons for Mary Katrantzou in 2016; a pink Concorde filled with supermodels flown to Cannes for a Victoria’s Secret show in 2000 — the high-impact, lower-footprint Jacquemus show is an example of the new normal de Betak and his sought-after production agency, Bureau Betak, are hoping to establish.

“I’ve worked all my life doing something that’s not good, but that’s behind me, and now I can use that to do good,” de Betak said.

To be sure, the least impactful fashion show is one that doesn’t happen at all, but the event producer is in a uniquely powerful position to drive change from within one of the industry’s most important and visible cultural touchpoints. 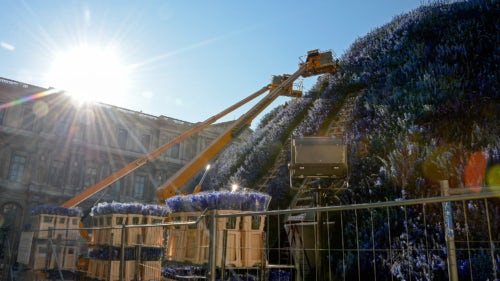 “I would be really stupid to stop doing fashion shows, because I have much more power doing what I do than not,” he said.

In an industry mired in tradition, de Betak has a radical and modern vision for the future of the fashion show; one that isn’t tied to a fading fashion week  or reliant on wasteful excess and gas-guzzling travel. A modern show should be smaller, more digital and not linked to a traditional schedule.

“I’m convinced [brands will]... eventually revisit the format of the fashion show and agree with us that we don’t even need a fashion show, or need an event at all, and replace it with a positive action,” de Betak said. “By doing what we’re doing, I’m not only shooting myself in the foot, I’m shooting my clients in the foot. It’s putting pressure on the industry to do better.”

Certification is just the start: from now on, every event Bureau Betak produces from its offices in Paris, New York and Shanghai will be governed by a strict framework, laid out internally in "Ten Commandments.”

Commitments start at eco-conscious design — a work already in progress that involves focusing first on elements that can be rented or are reusable, fully repurposing or upcycling all set materials, and recycling all waste. They extend to zero tolerance for single-use plastic and minimising the use of fossil fuels and travel. The agency plans to reduce its carbon dioxide emissions by 25 percent by 2022, and from now on will offset the emissions it can’t avoid at €15 per ton ($16), more than double the rate Gucci said it would pay when it announced plans to go carbon neutral last year.

“There’s no carbon neutral event or fashion show,” de Betak said. As a company focused on luxury events, “we can’t be cheap; we need to buy luxurious offsets.”

Bureau Betak aims to gain B Corp certification in 2021, joining the likes of Patagonia and Allbirds in pledging to balance purpose and profit. Within the year, it plans to put together and share a manifesto of local resources and technical solutions to help reduce the footprint of its shows. De Betak has ambitions to gather some of the industry’s biggest names in a “Do Tank” that will seek out more solutions from environmental and sustainability experts, and share them with power players who can broaden the reach of such learnings.

“We can all agree today that slowly we could revolutionise the fashion week system,” de Betak said. “Our world of fashion and luxury won’t survive well if it doesn’t apply a major revolution.”

The move comes as fashion shows and events are coming under mounting scrutiny.

Though the bulk of fashion’s negative environmental impact occurs during manufacturing, the industry’s opulent and sometimes over-the-top events are a very visible symbol of excess.

Traditionally, show sets have been disposable, built to function for a fleeting moment before being dismantled and discarded. Then there are the international flights and hired cars that belch out emissions to ferry fashion’s great and good to attend. Not to mention the clothes themselves, transported to shows wrapped in plastic.

But that model is coming under fire — in London, public protests by environmental activists Extinction Rebellion have fought to upstage fashion week several seasons in a row — and leaders in the industry are already moving to change.

In January, Copenhagen Fashion Week launched a three-year sustainability action plan, announcing that from 2023 onwards, brands will have to meet a series of social and environmental requirements in order to qualify to participate. Brands including Gucci and Gabriela Hearst have laid claim to staging carbon neutral runway shows — with Hearst’s produced by Bureau Betak — while Burberry’s catwalk this month was accompanied by a release on the steps the company is taking to reduce and mitigate its impact. Instead of gifting, the brand said it was planting trees in Australia on guests’ behalf.

Still, change isn’t easy and has been derailed in the past. Bureau Betak first started looking at operating more sustainably more than a decade ago — right before the financial crisis.

“Many of our big efforts in sustainability back then got stopped or slowed down by the recession in 2008,” de Betak said. “It took another 10 years to be back on that very strong track again.”

The agency’s latest efforts were years in the making. To get to this point has required the team to rethink the way they design events so that sets can be reused, repurposed and recycled instead of sent to landfill or incinerated. That’s also meant tough negotiations with vendors and clients.

Then there’s the price of the agency’s no-compromise ban on single-use plastics. The plumbing system and water purity check required to connect a water fountain to a city’s water supply can cost around €10,000 for large shows. Even regular water dispensers paired with reusable bottles or compostable cups come at a premium compared to simply supplying 500 plastic bottles of water.

There are ways to offset the costs, like reducing the materials used in the first place and focusing on rental and reuse — already long-standing practises. At Dior under John Galliano, Bureau Betak used the same benches for years, revamping them each season with a lick of paint or design motif to suit the relevant show theme. At Rodarte, the agency has turned the minimalist, budget-friendly use of strip lights into a brand signature. Plugging into the mains through a renewable energy provider can be much more cost-efficient than a generator too. Though where that's not an option, a biofuel generator is more expensive than a conventional one.

You have to convince clients to spend extra money.

On the other hand, the impact of the measures already in place is tangible. The agency said it's reduced the average waste generated by a large-scale show to six tons. That's compared to 40 tons a few years ago, before recycling and upcycling were embedded in its production standards. Now, the agency even collects and recycles cigarette butts dropped during show set-up.

For all these efforts, substantial challenges still remain.

The average emissions of a large fashion show during a major fashion week is around 700 tons of carbon dioxide equivalent, according to Bureau Betak. It attributes around 200 tons of that to production elements under the agency’s control, but the other 500 tons is down to guests’ air travel.

More digitally-focused shows and events could help solve that, but the industry is a long way from a wholesale shift from the traditional model. And there's still no getting away from the fact that shows are marketing events intended to help sell more product.

Then there’s the question of sponsorship. Fashion shows remain a huge expense that many brands can’t shoulder without external support. Historically sponsors have included car companies and bottled water brands, both of which sit uncomfortably at odds with sustainability commitments. De Betak can be uncompromising. 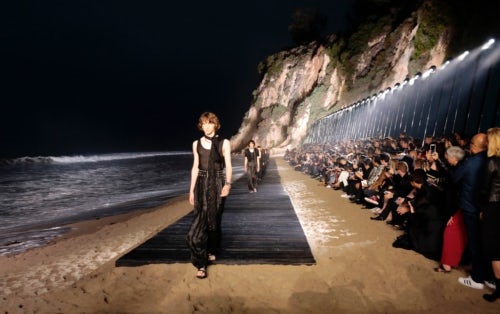 At Rodarte’s show during New York Fashion Week earlier this month, he stepped in to stop a major water brand that had sponsored the event from placing plastic bottles on attendees' seats. The show went off as he insisted with no single-use plastic in sight, but the fallout is still ongoing.

Elsewhere though, such stringent principles still bow to creative necessity. For instance, the agency ended up pouring a concrete base for one big show last year because it couldn't find a greener solution that would work within the time frame required.

Such compromises are likely to come under more intense scrutiny now that Bureau Betak is laying down the gauntlet and publicly declaring its commitment to sustainable production.

It's already had some experience of what that feels like. A Saint Laurent show on a Malibu beach last year caused local outrage over concerns it might disturb the mating habits of the region’s grunion fish and hadn’t received the appropriate permits. De Betak said the agency had secured all the necessary permits and left the area of beach used for the show in better condition than before. Meanwhile, the agency's found Saint Laurent one of its most supportive partners, willing to put in time and budget to move towards more eco-conscious ways of operating.

“People will come and look at us and scrutinise us more,” de Betak said. “We need the pressure, not just me, but everyone around me: the team, the vendors, the clients. Because otherwise no one does anything.”

Disclosure: Bureau Betak has produced multiple events for The Business of Fashion, including its BoF 500 and VOICES gatherings.