Models walk in the Tencel by Chen Wen Show at China Fashion Week last year. Some of the clothes were made with Tencel. | Source: Shutterstock
Sustainability
Share
Comment
BoF Professional Exclusive
By Sarah Kent August 23, 2019 05:20

LONDON, United Kingdom — You’ve probably never heard of Tencel, a brand of eco-friendly material made from processed trees and used by the likes of J. Crew, Allbirds and Levi’s. But if its manufacturer has its way, Tencel will take its place alongside Gore-tex and Lycra in the cultural lexicon.

Shoppers are more climate conscious than ever, and brands like Patagonia and Reformation have built global businesses by touting sustainability credentials such as reduced water usage and eco-friendly materials. Now, the makers of some of those high-tech fabrics are looking to cash in on the trend as well.

That’s easier said than done for companies like Lenzing AG, an 80-year-old Austrian fibre manufacturer. The company’s products, which are made from chemically-treated wood pulp, have been a staple fabric ingredient for decades. But its marketing fire-power — such as it was — was squarely focused on business customers. That changed last year, when the company began a concerted effort to target consumers. It relaunched Tencel in a bid to build a brand with a household name synonymous with sustainability.

The timing couldn’t be better, with environmental concerns climbing up the political and social agenda.

While fashion has historically escaped the scrutiny and criticism levelled against industries like oil and mining, it ranks among the most polluting sectors in the world; fabrics and raw materials are a particular pain point. The textile industry’s environmental footprint is “comparable to the car industry, but because it’s so fragmented, nobody really pays attention,” said Lenzing Chief Executive Stefan Doboczky.

All of these companies want to be the green lycra.

But mounting awareness of the industry’s negative environmental and social impact is pushing fashion companies to look for more sustainable solutions, and publicise these to consumers. Retailers are including granular detail about where clothes are made and the materials used to make them on labels and websites. Many are struggling to come to grips with how to modify their businesses, and are eager to latch on to products with credible solutions. That’s created a game-changing opportunity for textile and fibre manufacturers to develop an independent brand that rarely existed in the past.

“All of these companies want to be the green lycra,” said Nina Marenzi, founder and director at sustainable textiles nonprofit The Sustainable Angle. “They want to be that brand that everyone knows as sustainable.”

A new breed of products like the pineapple-fibre-based leather alternative, Piñatex, have piqued consumer interest. Earlier this year, textile-technology start-up Evrnu partnered with Stella McCartney and Adidas AG to launch a range of hooded sweatshirts made from NuCycl, its branded fibre made from recycled clothes. The limited collection was given to athletes and will go on sale to the public next year.

“We’re out there doing whatever we can to seed the market so it understands what we’re doing and why we’re doing it,” said Stacy Flynn, CEO at Evrnu. “The whole goal is that if consumers already have resonance with the brand, there should be a built-in market.”

Lenzing is in pole position. It was established as a viscose plant in 1938, but has been investing in improving its environmental performance since the 1970s. The standard manufacturing process for viscose, or rayon, has faced criticism for the harsh and polluting chemicals it uses, as well as some manufacturers’ exploitation of endangered forests. 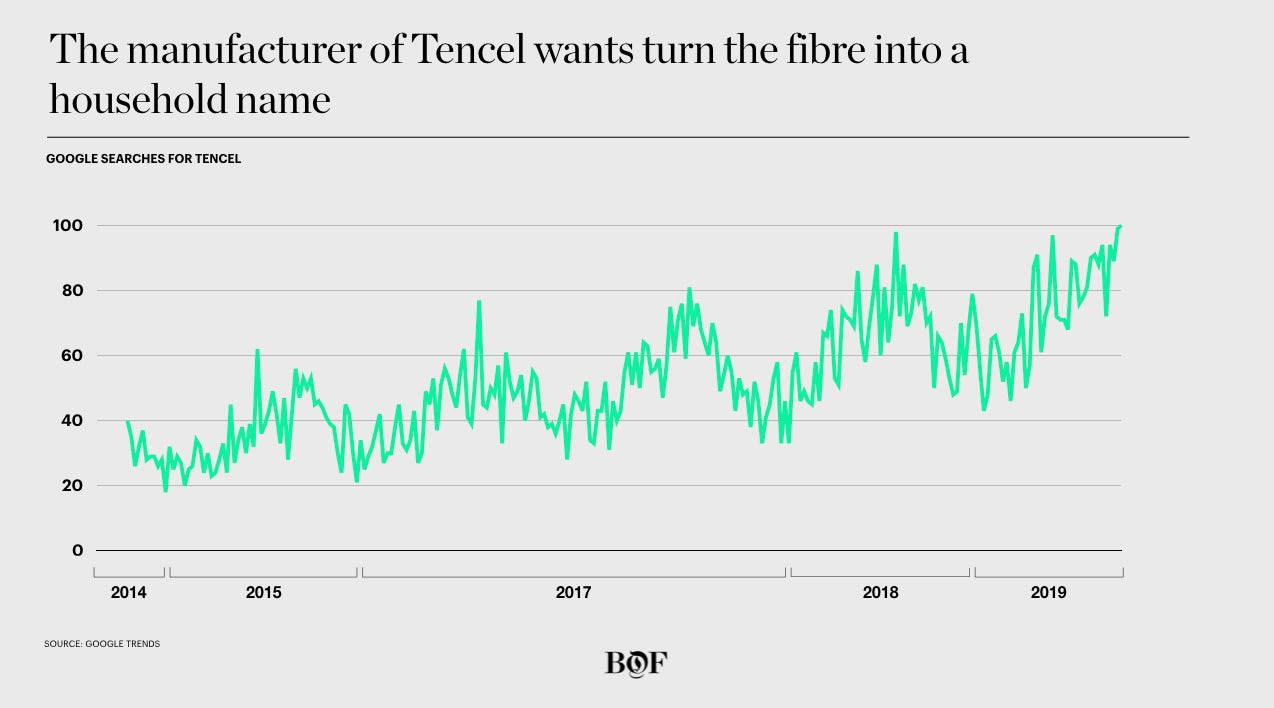 Today, Lenzing sources its wood from sustainably managed forests and plantations. Fibres, like those included in its flagship Tencel brand, are produced in a closed-loop system that recycles chemicals and water used in the process. It’s not perfect, but it’s cleaner than many other textile manufacturing processes.

Since Lenzing relaunched the Tencel brand in 2018, it has partnered with dozens of fashion companies to promote it. Reformation — the LA-based brand with a sustainability mission — describes Tencel as “the holy grail of fibres for fabric” on its website, and the number of products labelled as containing Tencel doubled to nearly 91 million in the first half of the year compared to the same time a year earlier. The public has begun to take an interest; Google searches for Tencel have roughly doubled over the last year.

“The branding is just crucial,” Doboczky told analysts in August.

Where successful, such efforts can give fibre manufacturers extraordinary and unusual power in an intensely competitive market. Italian manufacturer Aquafil SpA requires brands to go through an application process before they can gain access to its recycled nylon Econyl fibre.

It’s taken New York-based designer Jonathan Cohen since February to get through the process. It required the brand to send over a pitch for how it would use its Econyl-based fabric, including sketches and details of how, and in what volume, the planned garments would be manufactured.

“It’s very different,” said Cohen, who is using Econyl to create a crystal-studded cocktail dress and trench coat. “It’s not going to look like what you expect to see out of nylon.”

Companies already using Econyl include Prada, which is deploying the fibre in its shift to recycled material for its nylon bags, and Burberry.

It’s very different... It’s not going to look like what you expect to see out of nylon.

The challenge is that taking on a new fabric represents a significant risk. Its quality, texture and drape is unknown and designers can only guess at how best to work with it. Mills and manufacturers face similar hurdles understanding how to spin and handle a new fibre.

Before brands “make a whole new collection, they want something that has been tested, and proved, and is already available at scale,” said Morten Lehmann, chief sustainability officer at The Global Fashion Agenda.

According to Doboczky, lyocell — an unbranded form of Lenzing’s Tencel — is still considered a young fibre at nearly 30 years old, and it can easily take a decade for a new type of material to reach its maximum potential.

“It is a very conservative and complex industry,” he said.

As an established player with a product that’s already well understood, Lenzing has an advantage over younger competitors, and its branding strategy is intended to keep things that way.

“With so much greenwashing coming out and competitors coming up, you want to make sure the customer knows what the difference is,” Marenzi said. “All of a sudden, there’s such a shift in the public consciousness and they’re kind of riding that wave. They’re perfectly positioned.”

The 10 Commandments of New Consumerism