LONDON, United Kingdom — For his first show at London Fashion Week, Christopher Raeburn turned surplus military parachutes into eight garments. Only later did he learn that his grandmother had, more than 60 years earlier, used similar material for a different debut - her wedding dress.

“It felt quite serendipitous when my mum mentioned it nonchalantly over dinner,” said Raeburn, who in the decade since that show has built his brand around surplus fabric and clothing, including military jackets purchased in bulk from the UK Ministry of Defense.

Finding creative uses for deadstock — a catchall for fabric and clothing that was never purchased by a consumer — has long been a rite of passage for new designers. A factory’s leftovers or a retailer’s boxes of unsold jeans tend to be cheaper than sourcing new materials. And limited quantities are perfect for garments destined to appear in a single runway show or a handful of stores.

But a growing number of designers are turning deadstock, vintage and other found fabrics into big business. Thrifty fashion-school students are discovering their ability to scour flea markets and warehouses for discarded textiles can be scaled into global brands. They're increasingly joined by some of the fashion industry's biggest players, including luxury brands riding the nostalgia trend and mass retailers looking to burnish their sustainability credentials with "upcycled" materials.

Reformation, which started out sourcing deadstock from Los Angeles-area stores and factories, has built a $100 million-plus brand, while online fast-fashion giant Asos incorporates vintage and used materials into its "Reclaimed Vintage" line.

“Every garment has a story to tell, whether it's a reproduced textile … or if it’s an embroidery from the 1940s,” said Emily Bode, who recently staged her first runway show in Paris, three years after starting her menswear label with one-of-a-kind pieces out of tablecloths, French mattress covers and other deadstock. “We have guys who come in that fall in love with the story. But then we have people coming to shop just because they really liked the like fit of our clothes … and the overall idea of repurposing and reproducing.”

It would be kind of boring to launch another brand by making tons of new clothes.

Fashion's gatekeepers have given deadstock a boost as well, showering emerging designers who incorporate repurposed materials with major industry awards. Bode is a finalist for this year's LVMH Prize, and the most recent Hyères festival winner Cristoph Rumpf also turns to flea markets for inspiration.

“Everything I own is second hand” said Rumpf, a student at the University of Applied Arts Vienna, adding that he'll continue using surplus fabrics when he graduates and establishes his brand. “It would be kind of boring to launch another brand by making tons of new clothes.”

Rumpf made about 90 percent of his seven-look Hyères capsule with deadstock fabrics. One jacket, a midnight blue number with gold detailing, consists of a scarf he bought at a flea market, deadstock jacquard and cotton and a lapel stuffed with foam from an old car seat.

Sourcing deadstock can be a creatively stimulating and sustainable alternative to buying new fabrics, but it's not easy. While using unwanted fabrics saves money at the outset, costs can accumulate later in the process.

“The expense comes in for us when deconstructing the items,” Raeburn said. “If things go wrong with the sourcing, say we're bulk buying and it’s not the same thing as the sample, it can cause headaches as you're not buying fabric on a roll.” 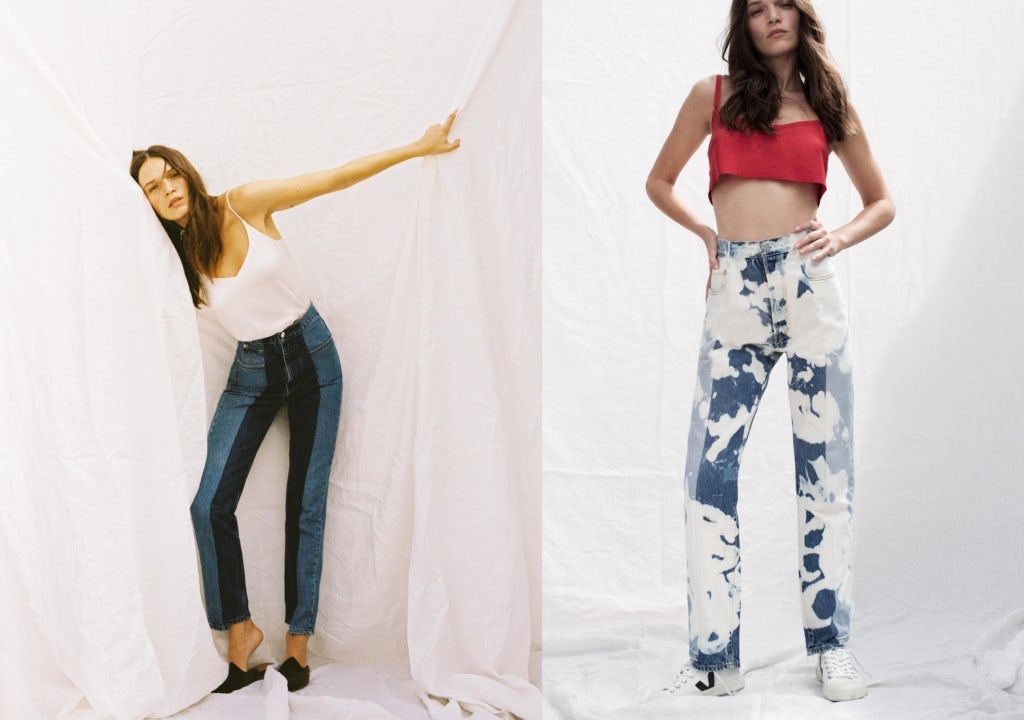 Finding usable amounts of quality deadstock can be a struggle for growing brands, making it difficult to manage inventories and meet orders from retailers. Most brands mock up designs and order fabric based on retailer demand. That process is turned on its head for designers relying on deadstock, as they often buy textiles up front, sometimes in high-pressure environments where rivals are after the same supply.

“It is really competitive. I always say at Brimfield [a large antique show in Massachusetts] especially, we're on the fields by like 5 am,” Bode said. “And it really feels like it could be a sitcom. There's so much drama there. I've watched people scream at each other."

Anna Foster, founder of London-based brand E.L.V. Denim, said she tries to work with retailers that will be flexible and tolerant of some variation in her products.

“A vintage supplier isn’t going to let me hold things or get a receipt, it doesn't work like that," she said. "Retailers are having to learn that if they want to work within sustainability and upcycling, there is a certain balance."

E.L.V.'s signature straight jeans are made from two halves of jeans previously destined for landfills, stitched together with the help of a local atelier. They retail at Net-a-Porter, Selfridges and ShopBop for upwards of £295 ($410), as well as Le Bon Marché beginning in September.

“When we started out using deadstock fabrics, we didn’t talk about it as it seemed to put us outside of the luxury space and made us sound a little craftier and more homemade.” said Christopher Peters, who launched New York-based label Creatures of the Wind alongside Shane Gabier in 2008. “Nowadays, everyone’s doing it.” 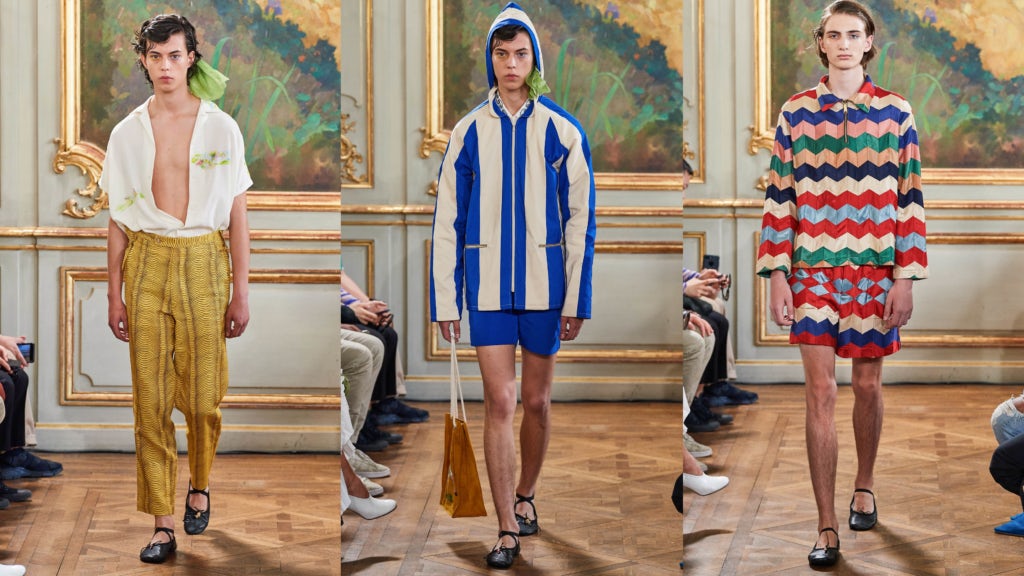 As their businesses expand, deadstock-dependent designers must evolve their sourcing strategy.

Bode said she still frequently attends textile fairs, flea markets and other events where she’s likely to stumble upon a trove antique lace or a unique quilt.

But as her brand has grown — it's now sold by dozens of stockists in 11 countries and she staged her first runway show in Paris earlier this month — Bode has diversified her supply.

Antique dealers she’d met over the years steer her to bigger textile hauls. She travels the world to find new supply (garments for sale on her brand's website include vintage fabric sourced in West Africa and India), and invests in high-end materials.

Eventually, designers outgrow their deadstock roots — antique shows alone can't sustain a global business. Raeburn produces pieces locally made via waste reduced practices and from recycled plastic, in addition to using surplus fabrics. Bode now designs multiple types of garments: one-of-a-kind pieces, small runs of clothes that incorporate deadstock, and larger runs, for which she commissions partners in India and the US to reproduce certain patterns and textiles.

Reformation makes about 15 percent of its garments from deadstock fabric, down from more than half about five years ago.

Reformation outgrew LA’s thrift stores and flea markets long ago. Founded by Yael Aflalo in 2009, the brand known for its feminine, Instagram-friendly aesthetic, makes roughly 15 percent of its garments from deadstock fabric and 2 percent from repurposed vintage, down from about half five years ago, said Kathleen Talbot, the company’s vice president for operations and sustainability.

Though the company occasionally scores huge fabric hauls, including thousands of yards of denim from a shuttered brand, deadstock loads tend to top out at a few hundred yards — enough to make perhaps 50 maxi dresses. Reformation might offer a few in each size, and would be unable to make more if they proved popular.

As Reformation produces more garments from new fabric, it's finding other ways to manufacture clothing in a sustainable way, from barring harmful chemicals to planting trees and reducing water usage. Deadstock and vintage is mainly used in holiday and novelty apparel, where limited runs aren’t a problem.

“There’s only so many sparkly dresses you want to make,” Talbot said.

A company as large as Reformation has to source deadstock at an industrial scale. As sales grew over the years, Aflalo and her team turned to jobbers — fabric wholesalers — and the many small factories in the Los Angeles area that had surplus textiles. Today, the company approaches factories it works with around the world about whether they have any interesting fabric left over from past jobs.

Because it is rare for factories to sell deadstock to designers — particularly in developing countries like Turkey and India — some extra vetting is involved when opportunities do arise. If a factory owner claims to have a trove of ageing fabric, Reformation’s sourcing team will ask to see receipts that show when it was purchased and has suppliers sign a deadstock verification form, which is available in five languages.

When a factory volunteers some extra fabric, Reformation’s sourcing team often follows up with a trick question: can they order more if needed? An answer in the affirmative, though a sign the factory would be a good partner on conventional materials, can be disqualifying.

Ultimately, brands that uses deadstock fabric to make one-of-a-kind garments run the risk of the sourcing process being hit-or-miss. “It ebbs and flows with the cost,” said Bode. “One season there will be a plethora of 1960’s towels that I find everywhere, and then one season, it just isn't there.”

However, research and relationships with suppliers can help produce results. “The good thing is that over the years, we've now built up some really good contacts,” Raeburn said.

“Sometimes it works the other way around, where rather than sourcing and going to warehouses, we're sent samples, which is really exciting and keeps things interesting. Sometimes you have some really nice surprises, it keeps us creative.”