"There are good profits and bad profits," Persson said.

The challenge for the fashion industry is whether the good money can match the bad. Under growing pressure from consumers, activists and investors, many major brands have made bold commitments to change the way they do business. Few have outlined what that will cost or how they plan to invest to drive change. And to really see the industry shift, sustainable practices will have to show they can generate sustainable profit.

“We’re going up against a tradition of doing business that is extremely profitable,” said Lewis Perkins, president of the Apparel Impact Institute, an industry body that selects, funds and scales projects to improve the industry’s environmental impact. “When you follow the money, the incentive may not always be there when it’s looked at as a tremendous added cost.”

On the flipside, fashion is one of the world’s most polluting industries and if it fails to act, the costs could be even more severe. Last year, the UN Intergovernmental Panel on Climate Change warned that the world has to make rapid and far-reaching changes to avoid a climate change catastrophe that will negatively impact all businesses.

Disruptions to the delivery of goods and services because of environmental disasters are already up by around a third since 2012, according to the World Economic Forum’s annual global risk report. Climate change has hit cotton crop yields and cashmere production, and extreme and unusual weather patterns have left retailers struggling to offload seasonal items. Despite calls for more sustainable consumption, the industry remains on a rapid growth trajectory, with clothing production expected to hit 102 million tons by 2030.

With awareness mounting, companies are already making long-term commitments to reduce their environmental footprint. Firms including Kering SA, Burberry Group PLC, H&M and Inditex SA have signed the UN’s Fashion Industry Charter for Climate Action, pledging — among other things — to reduce the industry’s emissions by 30 percent by 2030.

Elsewhere, new contenders like shoe brands Veja and Allbirds have shown that operating more sustainably can be profitable. Established players are also making individual commitments to tackle pollution. For instance, Adidas AG has said it will only use recycled plastic by 2024; Levi Strauss & Co. has set a target to reduce emissions in its supply chain by 40 percent by 2025; and the owner of Tommy Hilfiger and Calvin Klein, PVH Corp, laid out a suite of ambitious new sustainability targets on Monday.

“There’s so many positives that come out of this, but it does require, in the short term, some level of investment, some level of capital,” said PVH Chief Executive Emanuel Chirico.

While fast fashion is frequently criticised for its social and environmental track record, H&M is one of only a few major brands that have directly invested in new technologies that could change the industry’s impact. Over the last few years, it’s poured millions of dollars into early-stage financing of new recycling and textile technologies and set specific targets to reduce its environmental footprint.

“It’s going to cost a lot,” H&M’s Persson said during an interview at the company’s Stockholm headquarters. “We could have had better profits in past years if we didn’t do the sustainability investments... but we always do what’s best for the company in the long-term.”

Despite some advances, the industry as a whole is not moving swiftly enough towards more sustainable business models. Last week, the Global Fashion Agenda and Boston Consulting Group flagged that fashion’s pace of progress on sustainability is slowing as big brands grapple with how to scale new disruptive business models and integrate new technologies.

To keep moving things forward, the industry needs to start having serious conversations about the level of investment needed to drive change, because the question mark around what needs to be done and how much it will cost is acting as a barrier to action.

In a world of squeezed profits and tight margins, many brands have little budget to play with and finance departments want to know what kind of return on investment to expect when making budget decisions. In the meantime, individuals and departments tasked with driving better business practises often find themselves rubbing up against entrenched ways of doing business and measuring success.

“Sometimes it’s quite difficult to sell because someone’s KPI might be about how much money they can save in a year,” said Deborah Bee, group marketing and creative director at luxury department store chain Harvey Nichols. “If I say, ‘Can we look at lightbulbs or paper?’ their reaction will be, ‘It costs more’ — and it doesn’t always cost more, or the initial outlay can cost more, but then there are savings.”

You’re looking at a big investment to address some of the challenges.

Putting a precise dollar figure on what it will take to transform the industry is tricky. Fashion’s supply chain is notoriously murky, making it difficult to pull together accurate data on the industry’s impact. Companies with different business models will face different challenges. In some cases — like with resale or rental models — there are obvious and immediate money-making opportunities. Elsewhere, it can be less clear how long it will take for investments in more sustainable business models to pay off.

“You’re looking at a big investment to address some of the challenges,” said Caroline Brown, a managing director at investment firm Closed Loop Partners. “There’s a misconception and concern that this will hold a company back.”

When Danish label Stine Goya recreated its showpiece collection in sustainable fabrics this January, the brand found that the costs for some of its pieces more than doubled. That’s put a limitation on the pace at which the company can shift the way it operates.

“If we did it all sustainably, but had to raise prices 10 percent, I think maybe between 10 to 30 percent of the buyers would fall off,” said Chief Executive Thomas Goya Hertz. “It’s a little sad to have this price limitation, but it will change us as a brand to suddenly change our price point — and the impact of that will mean we won’t survive.”

Over time, it’s likely that costs for many more sustainable materials will come down, as greater demand creates a bigger market for fabrics currently seen as specialised. While larger brands may be able to absorb additional transitional costs, that’s a much harder proposition for smaller firms with less flexible balance sheets. 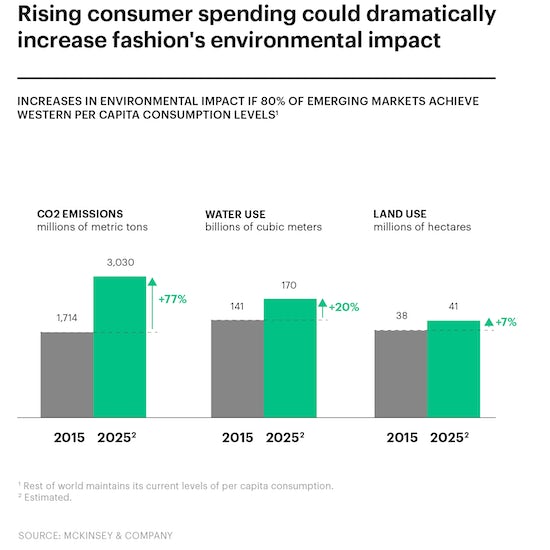 Simply shifting to more sustainable fabrics also won’t be nearly enough to fix fashion’s climate problem. The industry accounted for 1.7 billion tons of carbon dioxide emissions in 2015 and consumed 141 billion cubic meters of water, according to data from McKinsey & Company published in 2016. If the industry doesn’t change the way it operates, that impact will increase dramatically along with rising consumption in emerging markets. According to McKinsey’s analysis, the industry’s carbon emissions could increase by nearly 80 percent by 2025 assuming the majority of the emerging markets achieve Western levels of consumption.

To be sure, more work is being done to establish the business case for sustainability. For instance, New York University’s Stern School of Business is working on a project to assess the return on investment apparel companies can expect from environmental and social initiatives.

A host of projects also already exist that show there’s a path to manage the industry’s growth sustainably and still deliver profits.  In 2016, Levi’s launched a pilot project in partnership the World Bank Group’s International Finance Corporation to provide six manufacturers with advice on water and energy efficiency. Factories that took part in the scheme were able to reduce emissions by an average of nearly 20 percent and in total saved more than $1 million. While the first phase of the programme focused on quick changes that would come at little to no cost, the group is now looking to step up efforts to target a wider group of manufacturers and provide low-cost financing for efforts that require more investment, according to Levi’s Vice President for Sustainability Michael Kobori.

Elsewhere, new technologies are also gaining traction. Textile research and development company Evrnu is currently working with fibre producers to introduce its technology for recycling old cotton and polyester clothes. It’s worked closely with brand and retail partners on prototypes to create a ready market for the new materials and is targeting industrial production by next year. The company has taken pains to make the transition compelling and cost-effective for manufacturers, who are often cautious of new technologies.

“These are really old, established businesses,” said Evrnu Chief Executive Stacy Flynn. “In order to change something in the operations requires generally a lot of time and money, and we’re trying to do it in a way where they see the benefits of changing.”

Long-term, the Global Fashion Agenda and Boston Consulting Group estimate companies that shift to more sustainable business models stand to boost their profitability by between 1 and 2 percentage points by 2030, as businesses benefit from reduced spending on resources like energy, water and chemicals, and the cost of conventional materials rise.

How much it will cost to get to that point remains an open question. In the meantime, there’s no denying that the upfront investment required is a barrier.

“What we hear again and again is that we need more investors to come in,” said the GFA’s Chief Sustainability Officer Morten Lehmann. “We see so many great start-ups working on sustainable materials, but we don’t see them going to scale.”

Making the Business Case for Sustainability

Building a Sustainable Brand: How to Get Started