Australia's fashion industry is turning to sustainability to reshape its perception on the global stage.

Australia's fashion industry is turning to sustainability to reshape its perception on the global stage.

SYDNEY, Australia — On Thursday morning, near Pitt Street Mall in the centre of Sydney, leaders from the Australian fashion and textile industries will gather for the Australian Circular Fashion Conference — the first of its kind in the country. The timing couldn’t be better: Australia is in the midst of a sustainable fashion moment, with fashion brands, retailers and media platforms waking up to opportunities within the sector. The $28 billion industry is keen to establish itself as a powerful voice in the global sustainability conversation.

Camille Reed, a former designer and founder of the conference, is seizing the opportunity to push the conversation forward. “The circular economy will be a no-brainer in the next five to ten years,” says Reed. “But if I tried to do something like this two years ago, it wouldn’t have worked because no one was open to it. Now, Australia is in a terrific position and it’s just a matter of time before we’re able to shout about it.”

Reed is setting her sights on some of country’s biggest fashion brands and retailers, with representatives from Target, Kmart, Country Road, General Pants and Forever New set to attend. “I want the big guys to come along because I want to help them on their journey — I want to open up this conversation to be the starting point for collaboration,” she says.

Leading by example are innovative boutique brands such as A.BCH, which works to a circular economy standard from their base in Melbourne. Also founded in Melbourne, KITX works with artisans in India, while Sydney label Ginger & Smart considers sustainability in everything from the botanical dyes used in production to up-cycled store interiors. In Tasmania, ivimade is producing bespoke bags from kangaroo leather, a food byproduct.

Sustainability is not a dirty word any more — it’s a cool thing.

This month, to coincide with Vogue Australia’s sustainability-themed March issue, (which was guest edited by actress Emma Watson) the magazine appointed journalist Clare Press as sustainability editor-at-large, a first for any international edition of Vogue. “To be modern, [Vogue] needs to embrace the things that matter to the next generation of fashion fans and one of those things is clearly sustainability,” says Press.

Positioning Australia as a major player in the sustainable fashion sector is a natural fit, believes Courtney Miller, international and government affairs director for the Australian Fashion Council. “Australian brands are thinking more and more about this space, partly because it’s a natural link to our environment,” she says. Press agrees: “It’s clear we’re really motivated by healthy living. We like to eat and drink well, so there is a knock-on effect where we’re now looking at our clothes and asking: are they healthy?”

The Australian consumer’s appreciation for homegrown fashion has been aided by the limited and only very recent presence of fast fashion giants — like Zara and H&M — in most of the country. “The tyranny of distance has meant that Australia doesn't have a lot of the global brands that other countries expect to have on their high street,” says Press. “When news stories start to question the validity or the appeal of fast fashion, it’s easier for us to wean ourselves off them.” 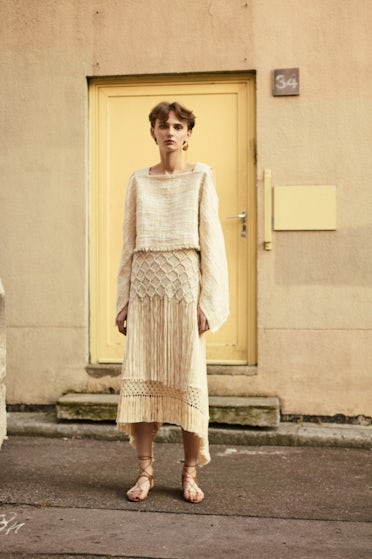 Compared to Europe and the US, Australian fashion brands are willing to embrace new sustainable practices by virtue of having a scrappy, up-start mentality. “We’re used to doing things differently — we’re young, fresh and untroubled by the heavy tradition that weighs down bigger and older brands,” believes Press. “That, coupled with the fact that we have had some dynamic leaders in the space, has meant that we have been able to push forward more quickly.”

Since 1968, Cue Clothing — the biggest womenswear manufacturer in the country — has been 100 percent Australian owned and maintains predominantly local production, while heritage leather company R.M. Williams has a zero-waste policy in the production of their footwear.

On a global scale, the challenge remains in shifting the perception of what Australian designers and brands can offer the international market, with resortwear being the long-held USP. “We certainly need to get beyond this idea that we are the land of swimwear and nothing else,” says Press. Australian-founded, international brands like Tome, Ellery and Ralph & Russo are also helping to reshape the global understanding of Australian fashion.

Despite encouraging steps forward, enthusiasm doesn’t translate to naivety; there’s still a long way to go. “I don’t want to greenwash and say, ‘We’re all so healthy and so perfect’ because that’s obviously not how it is,” says Press. “But sustainability is not a dirty word any more — it’s a cool thing. That Vogue Australia appointed a sustainability editor helps with the cache factor, but we have a big way to go — four years ago, no one even knew these words.”

Reed too realises that it will require continued commitment from across the industry to keep momentum going. “[We need] to work together to bring in all parties around us to create a stronger and bigger system, which will create longevity for the Australian market," she says. "This is a step forward and we’re not looking back.”