Inside the Business of Vicuña, the Wool Worth More Than Gold

For years, products made from the fleece of vicuña have been a symbol of ultimate luxury. Now, demand is rising and competition is heating up.

Inside the Business of Vicuña, the Wool Worth More Than Gold

For years, products made from the fleece of vicuña have been a symbol of ultimate luxury. Now, demand is rising and competition is heating up.

ALTIPLANO, Peru — There’s a reason why the Incas worshipped vicuña, the miniature cinnamon-hued cousins of the llama. The doe-eyed creatures, which inhabit the chilly Andean plateaus, produce a fleece so fine that it was considered to be cloth of gold. Only Inca royalty was permitted to wear it. About three million vicuña once roamed the rocky terrains of the Andes — until the arrival of the Spanish conquistadors, who made guns the primary method of obtaining “the silk of the new world” which was used to line King Philip II’s divans. And, for centuries, the animals were hunted, rather than sheared, for a material substantially finer than cashmere.

By the 1950s, vicuña had become synonymous with two pop cultural references. The more notable related to a scandal concerning Sherman Adams, US president Dwight Eisenhower’s chief of staff, who was forced to resign in 1958 after accepting a vicuña overcoat from a textile mogul who was under federal investigation. The case would become known as the Vicuña Coat Affair. The other was a scene in the 1950 film “Sunset Boulevard,” in which a tailor urges American actor William Holden, “As long as the lady is paying, why not take the vicuña?”

Both of those moments did much to reinforce the expensive allure of vicuña wool, which, by 1960, was incredibly scarce due to the fact that there were less than 5,000 of the creatures left in the Andes. After many unsuccessful attempts, the government of Peru, where much of the population lived, put its proverbial foot down and banned the hunting of the species, which were soon classified as officially endangered with an embargo placed on all trade of its wool by The Washington Convention (Convention on International Trade in Endangered Species of Wild Fauna and Flora).

Nature reserves were established for the preservation of the animals, and slowly vicuña became less relevant to a younger generation of luxury consumers. But a couple of vicuña admirers, inspired by their father’s love of the fibre, saw opportunity in the material: Sergio and Pier Luigi Loro Piana, the co-CEOs of Loro Piana, the Italian mill that was a part of the mid-century ‘Made in Italy’ movement and would eventually grow into one of the world’s largest producers of cashmere — and its biggest supplier of vicuña. 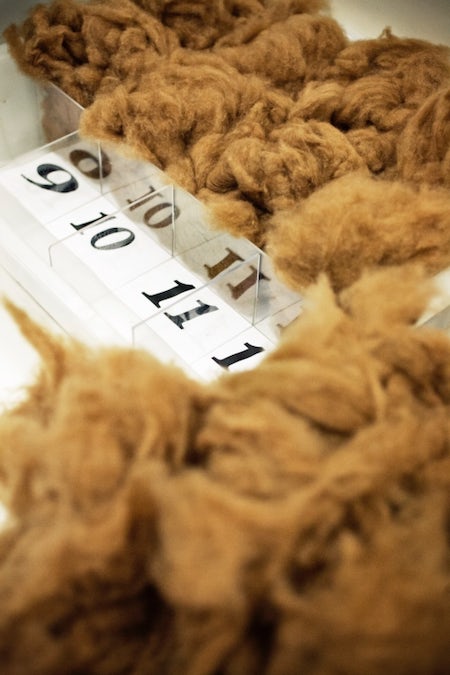 Per kilo, raw vicuña can fetch up to six times more than cashmere | Source: Courtesy

“We worked a lot to reintroduce vicuña to the commercial world,” says Pier Luigi Loro Piana, vice president of his family’s eponymous brand, which became actively involved with the Peruvian authorities by officially investing in nature reserves and preservation initiatives in the mid-1980s. “We worked pretty hard in the ‘80s and early ‘90s to make that happen,” he says of his and his late brother’s efforts to get vicuña back on the market. By 1994, their foresight paid off when The Washington Convention relaxed its restrictions and the Peruvian government chose Loro Piana as its exclusive partner in the procurement, processing and export of vicuña in the form of fabric and finished products. “Since then, we sourced a lot of vicuña that was officially sheared, and researched ways that we could develop a variety of items in new product categories to develop the possibility of a market for it here.”

Today, the total global supply of vicuña wool produced annually that can be transformed into yarn is only about 12 tonnes, compared to approximately 25,000 tonnes of cashmere. “Per kilo, vicuña costs between $399 to $600, compared to $75 to $85 for cashmere and $5 or $6 for wool,” says Pascaline Wilhelm, fashion director of Première Vision, the Parisian textiles and fabric fair. “It is seen as the finest and most luxurious of these fibres and it’s very exceptional to see 100 percent vicuña as it’s so expensive.”

But is there a genuine market for finished products made of the material? Or is the business of vicuña more like haute couture: a demonstration of creativity and quality that ultimately functions more like a marketing exercise?

At London’s Harrods department store, the spiritual home of the high-net-worth-individual, vicuña appears to be popular — though in true testament to Thorstein Veblen’s theory, the high price of the material may be one of its biggest selling points. “We now have a strong demand for vicuña and our clients recognise that it is one of the rarest and finest materials in the world,” says Helen David, the store’s chief merchant, though she declined to reveal specific sales figures. “The biggest offer we have is still obviously from Loro Piana, however, we also carry pieces from Berluti, Zegna, Brioni and Zilli.” Harrods also carries Falke’s pure vicuña socks, priced at $620. “In the end, it took us two years to produce the socks,” says Paul Falke, who adds that the wool is sourced from Loro Piana. “The demand for them is high, but as the yarn is so rare and exclusive we can only produce a small number a year, which is what true luxury is all about.”

At the Loro Piana boutique on London’s Bond St, a large, widescreen television plays a high-definition video of the animals roaming the Andes; elsewhere, a sack of raw vicuña wool invites customers to dip their hands into what feels like a cloud — the idea is that after touching it, cashmere simply doesn't compare. “Once you become addicted it’s very hard to change,” says Mr Loro Piana. One of the brand’s vicuña sweaters is up to four-and-a-half times the price of its cashmere equivalent — $995 compared to $4,495 for otherwise comparable V-neck sweaters. And the decadence of its 100 percent vicuña jackets and capes is often amplified by chinchilla trims and mink linings, making for what some see as the ultimate status symbol. Yet Loro Piana’s Bond Street store only ever has one of each style at a time and products made of vicuña make up a very small percentage of the items on display.

“For our business, it’s a very small part but a very significant one,” says Mr Loro Piana, who, with his brother, in 2013, sold 80 percent of the brand to French luxury conglomerate LVMH for $2 billion. Loro Piana, which is by far the world’s largest maker of finished vicuña products, declined to reveal precisely what portion of total sales revenue they represent.

But Mr Loro Piana is hesitant about vicuña being compared to couture. “It depends what you mean by haute couture,” he says. “If you mean it as something that’s in the air without any real meaning to the world, then no. But if you mean it as an expression of creativity and the highest level of quality, then you can compare it. Vicuña should be in the wardrobe of every Loro Piana customer — if only just one item.”

Loro Piana now has control over most of the world's vicuña market — it opened the 2,000-hectare Dr. Franco Loro Piana Reserva in Peru in 2008 and purchased a majority share in an Argentinian firm with legal permission to shear wild vicuña in an area of approximately 85,000 hectares in 2013. 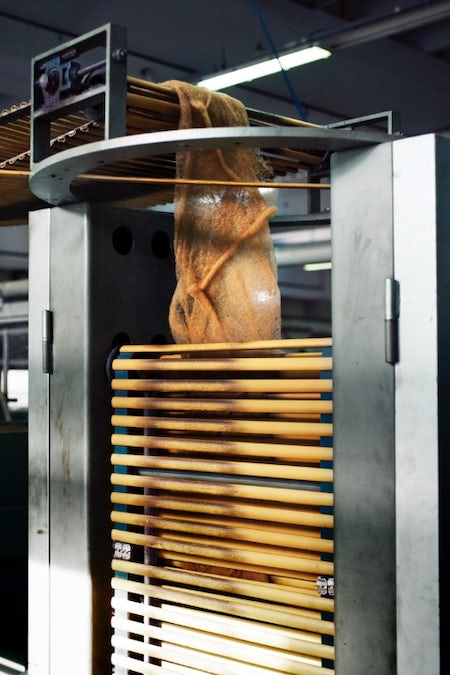 Loro Piana now has a dominant share of the vicuña market | Source: Courtesy

Until three years ago, the company sold its vicuña yarn to other brands. “To be competitive and provide to third parties, you need a critical mass of the raw material,” explains Mario Ortelli, senior analyst at Sanford C. Bernstein. “Other brands that source from Loro Piana are usually proud to say it because it’s synonymous with vicuña and high quality, so it’s a win-win situation.”

But today the company has pulled back and says it only sells vicuña-cashmere blends to third-parties, reserving its supply of 100-percent vicuña wool for its own products. “I think it’s a great way to get Loro Piana to stand apart,” says Luca Solca, head of luxury goods at Exane BNP Paribas. “They have access to a number of raw materials — lotus, baby cashmere, vicuña — which helps them to substantiate their high-end ambition, unlike some of their competitors.”

While it dominates supply, Loro Piana is not the only brand that has access to pure vicuña, however. Other brands and mills have been sourcing the wool in South America since 2002, when The Washington Convention opened up the trade of vicuña to outsiders. Ermenegildo Zegna and Kering-owned Brioni offer products made from vicuña, which they say they source independently.

Savile Row firm Holland & Sherry began been sourcing its own vicuña in 2003 from Bolivia, Peru, Argentina and Chile. (The company says it must source across four countries because Loro Piana’s near-monopoly makes it difficult to source enough vicuña in just one country). “When you say ‘vicuña’ to customers, the next words to come out of their mouth will be ‘Loro Piana,’” says Richard Chambers, Holland & Sherry’s commercial director. “Our service is just as good as theirs, if not better, but they have been part of that development from early on and now that they are part of the LVMH group, it seems they are only promoting it to the other brands within that same family.”

Moreover, Haider Ackermann’s inaugural ready-to-wear collection for LVMH-owned Berluti included a double-breasted overcoat with peak lapels which was crafted from 100-percent vicuña, which the Italian brand says was sourced from Loro Piana.

So how does Loro Piana’s emphasis on conservation play into its commercial agenda? “We have become a market leader because we had the possibility to buy the majority of what was available and guarantee the continuity of that business to the breeders,” says Mr Loro Piana “We needed to convince them that it was worth it for them to breed these animals. Also, to breed a vicuña you need at least 10 hectares and you need people to watch them.”

Meg Lukens Noonan, author of “The Coat Route: On the Trail of the $50,000 Coat,” began her research into vicuña seven years ago and has witnessed first-hand the traditional “chakku” shearing process, which is inspired by Inca tradition. She says the Italian brand has been pivotal in bolstering the population of the species in the wild, but is sceptical about the trade agreements the company has in place with local villagers. “The villagers were given a stake in the harvesting of the fleece so that it was advantageous for everyone; they got some money out of it and also had reason to protect the vicuña from poachers,” says Lukens Noonan. “But the villagers have not made a lot of money from this, especially when you look at the disparity [between what they earn and] what the finished products are worth.

“I think that what [Loro Piana] has done has certainly helped keep the animal alive, but I’m not sure that Loro Piana has had a positive influence on the [local] population or not,” adds Lukens Noonan. “It’s not profitable enough for Peruvians to sort of set up their own manufacturing and it is very niche.”

Mr Loro Piana seems aware that things must change in order to attract new workers to the profession of vicuña breeding. “We need a young generation to take care of the vicuña,” he says. “But they need to have the same standard of living as those young people in town otherwise they’ll just leave the Andes.”

Why Zegna is Getting Into the Sheep Farm Business