LONDON, United Kingdom — When Burberry announced a partnership with The RealReal in November, both the luxury brand and the resale site touted the initiative as an important step toward making the fashion industry more sustainable.

Burberry said the partnership will drive more circularity and encourage consumers to consider environmentally friendly options when refreshing their wardrobes. But the brand’s offer of tea and a personal shopping experience for anyone selling their items on The RealReal has a financial motive as well: to entice resellers to spend their profits buying new clothes, shoes and bags in Burberry stores.

There is a tension at the heart of the narrative pitched by resale platforms. On the one hand, finding new owners for used clothes keeps them out of landfill and reduces their environmental footprint — an item that is worn nine extra months has a 20 to 30 percent lower carbon footprint, according to WRAP, an environmental group.

The potential upside is significant. Resale is a tiny fraction of the overall apparel market, but is growing 21 times faster than sales of new clothes. GlobalData, an analytics firm, predicts the market, including resale sites, thrift shops and other venues, will reach $50 billion by 2023. 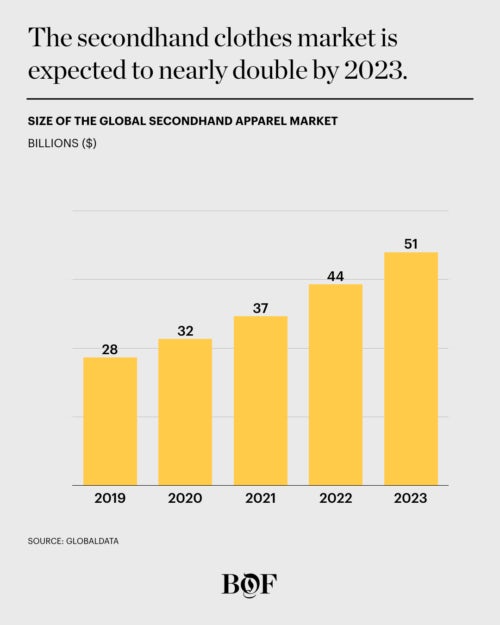 But there’s another side to resale’s environmental ledger. Critics argue that, by offering a ready market for unwanted items, re-commerce risks fuelling the current culture of binge shopping. The Burberry fan who sells a used handbag so they can afford to buy a new one might not be reducing fashion's footprint as much as it first appears.

“People are now trading these things, and it’s not preventing them from buying new stuff,” said Michael Sadowski, a research fellow at the World Resources Institute. “If you shop resale and that doesn’t change at all your purchases of new apparel, then there’s no impact.”

For some platforms, this cycle is a feature of the resale model, not a flaw. It’s a powerful pitch to big brands, which have historically been wary of re-commerce; far from cannibalising first-hand sales, resale can act as an entry point for consumers who would otherwise see luxury as out of their reach.

According to The RealReal, the majority of its consignors use their commission to shop the primary market. A recent survey by rival luxury re-commerce site Vestiaire Collective and Boston Consulting Group found around 30 percent of respondents’ primary reason for selling was to purchase new goods.

People are now trading these things, and it’s not preventing them from buying new stuff.

“The buyers are the ones who care about sustainability,” said Olivier Abtan, a managing director and partner at BCG who leads the consultancy’s global luxury arm. “The sellers are different: they are typically fashionistas who buy first-hand products and get back money from resale and buy new products.”

In addition to the Burberry partnership, The RealReal has partnered with Stella McCartney to offer users who consign the brand a $100 store credit. Vestiaire has launched a series of circularity collabs, partnering with brands including Sandro, Claudie Pierlot and Joseph to offer perks ranging from a €10 voucher to a 10 percent discount. The largest online consignment platform, ThredUp, offers consignors the opportunity to earn credit for Reformation and Cuyana — both brands that champion sustainability — when they send in items for the site. 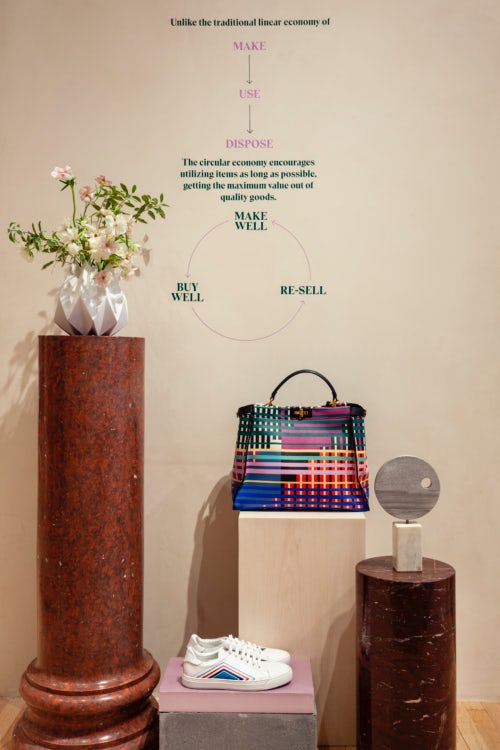 A graphic in The RealReal's Soho store illustrates how resale can encourage circularity. |
Source: Courtesy

The companies said they’ve chosen partners who produce high-quality, long-lasting items and offer a powerful opportunity to help spread the word on the importance of reducing fashion’s impact. The RealReal says around 30 percent of its shoppers use the site as an alternative to fast fashion.

“Investing in luxury is not only good for the wallet, because of the resale value, but also the planet, because luxury lasts well,” said Allison Sommer, director of strategic initiatives at The RealReal. “Stella and Burberry are two brands that grasped the impact of resale to encourage shopping with them instead of fast fashion.”

Natalie Steen has been blogging about shopping since 2017. Her shoppable weekly newsletter, The Nat Note, highlights her favourite items and styles. Steen said she trawls consignment sites because she can often find covetable pieces in basically new condition at bargain prices.

“It’s more like it’s just being exchanged through more hands, like there’s a middle man,” she said. “You’d be surprised at how often you find stuff with tags still on and that’s when you really feel like you’ve made a score because you’re getting it at a significant discount.”

Because consumers want even secondhand products to be in good condition, clothes that end up on re-commerce platforms are often brand new or barely worn. According to Vestiaire and BCG’s recent report, 62 percent of the products sold on pre-owned luxury platforms are unworn or scarcely worn.

In those instances, critics say resale is similar to outlet shopping with better branding.

“In some ways it’s just another markdown product,” said Kristy Caylor, co-founder and chief executive at For Days, a closed-loop clothing company that allows customers to swap old items for new while recycling the returns. “It’s another step in a linear chain; there’s nothing circular about it.”

In terms of being a virtuous cycle, a lot of consumers need to change their behaviour.

Resale sites acknowledge that they don’t offer a silver bullet and a lot still needs to change, but they argue that they do offer a valuable addition to fashion’s existing model that promises progress, if not perfection.

“In terms of being a virtuous cycle, a lot of consumers need to change their behaviour,” said Erin Wallace, ThredUp’s vice president for integrated marketing, noting the platform focuses on things in good to excellent condition because that’s what people will buy. Items that don’t meet quality standards are recycled.

Representatives from several of the largest sites said the rise of cheap fast fashion and the pressures of social media that lead to binge-shopping habits are far larger concerns.

“Regardless of Depop, it’s already out there,” said Chief Executive Maria Raga, pointing out that the online platform that’s wildly popular among Gen-Z consumers does at least provide a means to extend the life of clothes that aren’t being used. “I think people should be more conscious, and that’s for their conscience; it’s not for me to say, ‘hey if you haven’t worn it, don’t sell it on Depop.’”

Despite the complexities, resale is helping — slowly — to drive some changes in consumer behaviour. While it remains a fraction of the size of the overall apparel market, it is growing rapidly and beginning to have an impact on growth in the primary market, said Neil Saunders, managing director at GlobalData Retail.

If it continues to scale up it offers a promising and attractive business model for reforming the fashion industry — ThredUp estimates that if everyone in the US purchased just one item used instead of new, it would be the equivalent of taking half a million cars off the road for a year. But even at scale, resale is only part of the solution.

“I don’t think you can just put resale in the mix and say, ‘hey, we’re sustainable.’ That’s greenwashing,” said Saunders. “But as part of other things, that is helpful.”

The challenge is that while growing the market for secondhand clothes could be a powerful tool in reducing the waste and environmental impact of fashion, it is only one aspect of much broader changes required to reduce consumption, improve recycling technologies and ensure clothes are manufactured in an equitable and environmentally responsible manner to begin with.

“Reselling, it still encourages this guilt free ‘I can buy something new because, provided I could put it onto a resale platform, that’s OK.’ That’s not OK,” said Orsola de Castro, co-founder and creative director at nonprofit Fashion Revolution. “It cannot function as a solution on its own unless everything else before it is also in place. We need to resell clothing, but they need to be made in dignity and in a quantity that isn’t 150 billion garments a year.”

Inside the RealReal’s Plan to Dominate the Secondhand Luxury Market

The Year Ahead: End of Ownership