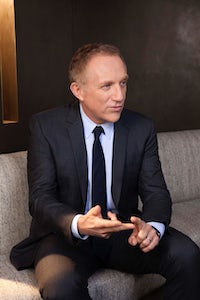 Editor’s Note: This story was updated to include the coverage of Friday’s presentation of the “Fashion Pact” at the Elysée Palace.

PARIS, France — A group of the world’s biggest fashion companies have signed on to a major new climate commitment, under political pressure from France, one of the industry’s most important hubs.

The “Fashion Pact” will be presented to world leaders at the Group of Seven summit, which will run from Saturday to Monday in the French resort town of Biarritz. Some 32 companies representing roughly 150 brands and around 30 percent of the industry have signed on to the commitment, promising to take steps to mitigate fashion’s impact on the climate, biodiversity and oceans.

The €1.5 trillion-a-year ($1.66 trillion) fashion industry “is one of the largest, most dynamic and influential industries on the planet,” the pact said. It’s also “one of the most impactful and therefore should … have the power to play a pivotal role in leading the shift towards a more sustainable future.”

The commitment is the result of months of difficult work to find common ground around a complex and challenging issue for the industry. It was prompted by French President Emmanuel Macron, who tapped Gucci-owner Kering’s Chief Executive Francois-Henri Pinault to pull together a sizeable industry coalition in April.

“François-Henri Pinault got his shirt wet,” said a Kering spokesperson. “Considering the deadline, it was challenging.”

Pinault will present the fashion industry’s response to the G7 on Monday, and is scheduled to meet with Macron at the Elysée Palace ahead of time Friday.

The group have their work cut out for them. According to the French Ministry of Ecology, the textile sector represents 6 percent of global greenhouse gas emissions and 10 to 20 percent of pesticide usage; washing, solvents and dyes used in its manufacturing processes are responsible for one fifth of industrial water pollution; and fashion accounts for 20 to 35 percent of the microplastic flows into the ocean.

At the same time, fashion is under pressure from Millennials and regulators to become more sustainable. Companies that have signed on to the pact have committed to set emissions targets consistent with the goal to limit global warming to 1.5 degrees above pre-industrial levels, and achieve net-zero emissions by 2050. Going forward, they’re expected to set similar goals to protect and restore ecosystems threatened by their activities, and take steps to reduce ocean pollution, such as eliminating single-use plastics by 2030 and supporting innovations to prevent microfibre pollution.

Signatories include a broad and international litany of some of the industry’s best-known brands. Chanel and Hermès, Versace-owner Capri Holdings and Calvin Klein-owner PVH, Adidas and Nike, Inditex and H&M, Selfridges, Galeries Lafayette and Nordstrom are among those involved. LVMH, Kering's arch-rival and the world's largest luxury group, is notably absent, as, largely,  are companies that operate further up the fashion supply chain where most of the industry’s damaging environmental impact takes place.

LVMH did not respond to a request for comment.

“It’s not perfect,” a Kering spokesperson told the media ahead of the launch, emphasising the speed and effort required to pull together an industry agreement at this scale in just four months.

The “Fashion Pact” represents the latest in a growing list of industry initiatives that have so far generated lofty goals, but limited tangible change. It remains to be seen if this latest effort will be different. While it’s not legally binding, the intention is that signatories will report annually on their progress.

“When you're in fashion, the best 'police officer' is not the state, but it is the consumer, the citizen,” the Kering spokesperson said. “From the moment these companies make public commitments, put the names of the owners, the CEOs, things really have to be put in place.”

This particular initiative may also gain additional clout from the degree of political scrutiny that accompanies it, with companies answerable to Macron, and now the G7. The French politician has styled himself as a leader in climate policy, enacting tough — and unpopular — domestic environmental regulations. The Fashion Pact is part of One Planet Summit, which he launched in 2017, after President Donald Trump threatened the US would pull out of the Paris global climate accord.

The goal is to have more industry players sign on going forward. Pinault will host a dinner for the signatory CEOs in October to further discussions.

“G7 is a starting point,” the Kering spokesperson said, speaking on behalf of the coalition.

“We need public leaders to create the right framework to encourage the private sector,” Pinault said in the Palace’s gilded Salles des Fêtes, its ballroom.

“Regulation is still important,” Poirson told BoF. “But either we make ten years of diplomatic efforts for an international treaty on fashion, or we start acting with the pioneers and the most self-inflicted.”

For her part, Poirson prepared the bill that is due to be debated at the Senate on September 24. Under the new measure, France plans to outlaw the destruction of unsold consumer goods, including textile products. Destroying them could result in financial penalties or prison time.

What’s Stopping the Fashion Industry From Agreeing on Climate Action?

Can Kering Grow and Be Sustainable at the Same Time?