PARIS, France — “I’m making fun of the fashion industry in a way, because I’m making the most glamorous and feminine collection out of trash,” Kévin Germanier says with a laugh, during a break from working as a junior designer at Louis Vuitton’s leather goods department.

For the past several months, the Swiss native would moonlight at his own label Germanier after a full day’s work at the French luxury giant’s Parisian headquarters. “I’d be at Vuitton from 9am to 7pm or 8:30pm, then I’d go to eat and start work at my atelier from 9:30pm until 2am,” he says. The designer will end his stretch at Louis Vuitton this month to focus full-time on Germanier, which is already making waves in the industry with its ultra-feminine and fantastical upcycled designs that are equal parts ethical and luxurious.

Where many young design talents would postpone own-brand ambitions for the prestige and security of Germanier’s day job, he is ready to fly the nest. “It’d be much more stable to continue leading a double life, but at a certain point you have to take the risk. It’s happening now and if I don’t do it now, someone else will.”

If recent months are any indication, the risk is likely to pay off. Since making his Paris Fashion Week debut in March 2018, Germanier was featured in MatchesFashion’s Fall 2018 womenswear presentation and the brand has announced that the luxury retailer will be its sole distributor starting with a launch in early September. 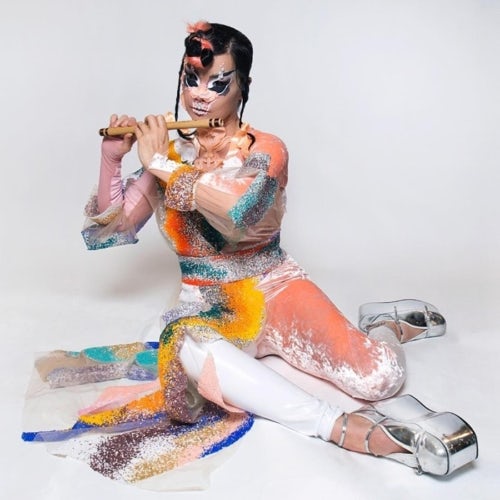 The designer’s first ready-to-wear collection pairs sculptural silhouettes with rainbow-hued beading. Floating ‘ribbons’ of fabric add a lightness to an otherwise architectural form, and otherworldly gradients of colour add a virtual and hyper-sensory feel. The launch will feature beaded T-shirts ($379) and skirts ($1,045) as well as statement jackets and dresses (around $2,800).

Germanier’s creations — whose aesthetic is disco, aquatic and intergalactic all at once, while being unabashedly feminine — have already graced the pages of Dazed and Confused, Vogue Germany and Numero Russia, and was worn by Björk on the cover of the Guardian’s New Review last November.

The label’s glamorous look almost overshadows the fact that all pieces are upcycled. Germanier began using unwanted beads after buying a bag of damaged stock off a man in Hong Kong’s Sham Shui Po district for less than $0.15 — a pivotal moment that led him to the creation of his own silicone embroidery technique. Germanier coins his creations ‘fast couture:’ for its literal meaning, as his technique produces quality pieces in record time (a dress that could take weeks to embroider is finished in under 48 hours), but also as a tongue-in-cheek jibe at the fast fashion industry problem he seeks to solve.

Growing up in a conservative Swiss village, Germanier’s upbringing nurtured his inclination to defy convention. After completing his foundation year at the Geneva School of Art and Design (HEAD), he attended Central Saint Martins in London for womenswear.

In his second year, Germanier applied to the Redress Design Awards (formerly the EcoChic Design Awards), where he won the award by impressing judges with an upcycled marriage of a wool blanket and polyethylene, as well as the opportunity to design Chinese luxury brand Shanghai Tang’s first upcycled collection.

The label’s glamorous look almost overshadows the fact that all pieces are upcycled.

The panel of judges included Orsola de Castro, a prominent proponent of ethical and sustainable industry practices and founder of the Fashion Revolution campaign, who thereafter became Germanier’s close friend and mentor. “As soon as I saw Kévin’s collection I knew he was going to win,” de Castro tells BoF. “It wasn’t just the design that was absolutely brilliant, but the fact that he had researched his customers and sources, to make upcycling accessible.”

Upcycling has long been woven into Germanier’s design DNA. “I was ashamed to say I wanted to do fashion, so I bought vintage and tweaked it, instead of asking my parents for fabric,” says the designer. “I moved to London and upcycled, not because I wanted to be sustainable, but because I had a deadline, no money and needed to find a solution.”

For Germanier, shame evolved into an enterprising and adaptive approach to sourcing and design. All garments are crafted by a six-person team in Paris and the designer procures his upcycled items from various sources: T-shirts are brought in from London, trousers from Paris, tailored jackets from Switzerland and even ‘leftovers’ from de Castro’s own studio. “I love having limitations, and situations where I have to make things work,” he says.

Such limitations will inevitably affect production as orders mount, but the designer is adamant that neither quality nor sustainability will be compromised. “Creativity and sustainability are at the exact same level in my brain, and it’s never about making something slightly less sustainable or vice versa. The world won’t evolve if people think like that.”

Arranging production around upcycling for the MatchesFashion launch has put both parties on a steep but rewarding learning curve. “I’d say, ‘I can make this skirt yellow if you buy 20 of them, but if you’d like 50, I don’t have enough beads and it’d have to be yellow and orange.’ With Matches, it’s more of a conversation, and everyone is open-minded and flexible.” Yet, quality and sustainability will remain a priority. “If we can’t produce 100, no is no. And it’s perfectly fine to say no.”

One unintended outcome of this approach is that it could pave the way for retailers to work with other designers using small batch upcycling. “It’s a new dialogue with buyers and a new process. Some people are scared, but when people are scared it means it’s new, so at least we’re going somewhere.”

Though MatchesFashion will remain Germanier’s exclusive online distributor for seasons to come, the brand has been approached by several other potential stockists and is studying its options. Ultimately, Germanier’s aim is to grow without compromising his ethos and the designer is in no rush to add more hands to the team if they can’t be paid and valued. “I could easily hire 20 people and have interns work for free, but that’s not in line with our message. Producing 1,500 T-shirts isn’t the goal.”

If the young designer’s record and supporters are any indication, it’s clear that this kind of ingenuity is what the industry needs. “To me, Kévin represents the ‘right now stroke tomorrow’ of what fashion should be,” says de Castro. “He’s a visionary but also firmly planted in the present [and] the way he designs is what we need now.”