Michael Kors will launch two new smartwatches on Thursday at the Baselworld watch fair in Switzerland.

The Sofie model for women and Grayson for men will enable users to track their fitness levels and sleep as well as customise notifications. A dedicated app, that allows users to link to Instagram account and set personal photos as a watch face will also form part of the company’s new features.

“The next generation of smartwatches will continue to fuse fashion and technology,” Michael Kors told BoF. “We wanted to give our customers even more customisable options so that their smartwatch becomes a seamless part of their personal style.”

The launch is part of the brand’s ongoing partnership with Google to create smartwatches and activity trackers, called Michael Kors Access, which are now sold in more than 15 countries around the world including the United States, Japan, Mexico and Europe.

“When we launched, we stated that we would grow our wearable technology line by listening closely to our customers,” said John Idol, chairman and chief executive of Michael Kors. “They have made it clear that they love being connected, love the ease of notifications from their favourite apps, and can never get enough customisation.”

Idol believes there is significant opportunity for growth for its wearables division. “In watches alone, it seems likely that the fashion watch business will be completely transformed within the next three to five years, so that most watches will incorporate some level of technology beyond timekeeping,” he told BoF.

“Our aim is to continue to be the leading fashion smartwatch brand. Beyond that, there are opportunities to explore in a wide range of categories. I think we’re just at the beginning of what’s possible in wearable technology.” — Limei Hoang

Nordstrom and The Black Tux are to open a series of shop-in-shops across the US.

The online tuxedo rental service's in-store boutiques will likely entice customers into stores at a time when brick-and-mortar retailers are suffering from declining foot traffic. The first shop-in-shop will be unveiled on Friday at Nordstrom’s Orange County store, with a further five shops to open at locations in Washington D.C., Atlanta, Boston, Seattle and Denver. 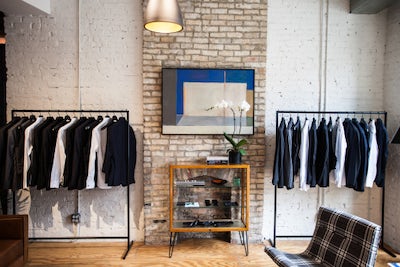 Customers will be able to book online for an in-store consultation and fitting at one of The Black Tux’s Nordstrom outposts. A selection of the company’s best selling styles, new seasonal collections, shirts and accessories will be available to try on in-store.

Nordstrom, which saw sales at its physical stores decline 6.4 percent in 2016, will benefit both from The Black Tux’s younger consumer — the average age of its customer is 29 — as well as the bespoke, concierge-like experience it offers in its showrooms.

“As consumers are changing, I think it’s important for retailers to affiliate themselves with brands that have a voice that connects to millennial customers,” said Andrew Blackmon, who co-founded The Black Tux. “A lot of these retailers are losing market share, especially for commoditised goods that you can buy online or on Amazon, so they’re trying to build experiences in store that can’t necessarily be replicated well online.”

For The Black Tux, the partnership gives access to the department store’s country-wide consumer base, which might still be apprehensive of making the switch to online rental services. “The goal at the end of the day would be to expand this into many more Nordstrom stores... so that any groom or groomsman around the United States would have the option.” — Helena Pike

The Copenhagen Fashion Summit serves as a meeting platform for the fashion sector's decision-makers, leading NGOs, experts, policy-makers and academia and aims to create a common understanding and gain industry-wide commitment on the most critical issues facing our industry and planet through panels and discussions.

he fifth edition of the summit will take place from 9-12 May at the Copenhagen Concert Hall under the patronage of HRH Crown Princess Mary of Denmark. — Christopher Morency
Do you have a story for News Bites? Email newsbites@businessoffashion.com.