The eco-conscious label’s new campaign highlights the delicate balance brands and activists navigate when working together.

Her latest ad campaign is an attempt to do both.

Featuring an unlikely mix of models and activists from the environmental group Extinction Rebellion, the “Agents of Change” campaign is intended to promote the brand’s more environmentally conscious clothes while also calling for climate action.

It’s an unlikely association, even for a brand that has long been an industry leader on environmental issues. Extinction Rebellion has been vocal in highlighting fashion’s negative impact on the planet and earlier this year called for consumers to stage a year-long boycott on buying new clothes — a message seemingly at odds with a seasonal ad campaign. The decentralised movement didn’t coordinate the individual activists’ participation in the campaign, but said it is in “positive talks” with Stella McCartney.

Social media has changed everything.

“We believe that the world has enough clothing and textiles in circulation,” the group said in an emailed statement. “We invite the good people in the fashion industry to join us in calling for an end to unnecessary consumption, excess and waste.”

The move is hardly the first time a fashion brand has aligned itself with a cause or weighed in on a controversial topic. But McCartney’s latest campaign is another sign that mainstream players in the industry are becoming bolder in their activism.

While activist designers like Katharine Hamnett have built careers around protest dressing, the industry as a whole has tended to shy away from controversial topics that might alienate consumers. But that’s changing. 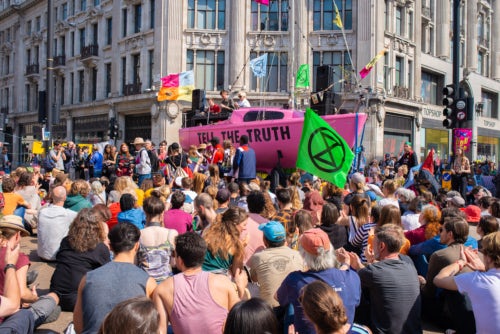 Platforms like Instagram and Twitter have opened up new forums for consumers to call out brands when they don’t align with their customers’ values. At the same time, the digital age has also opened up new opportunities for designers to amplify their voice around key topics that resonate with consumers, creating a powerful motive for players that have historically remained aloof to jump into the fray. For instance, major brands from Gucci to Nike Inc. are now speaking out on issues like gun control and race relations.

“Social media has changed everything,” said Leslie Gaines-Ross, chief reputation strategist at Weber Shandwick. “Luxury brands are changing and are having to be more mindful of sustainability principles and social purpose.”

In her latest campaign, McCartney is doubling down on eco-conscious principles that have long characterised her label. It’s a savvy move at a time when sustainability is becoming increasingly mainstream and resonating more broadly with consumers.

Nature takes centre stage with models in pastel-coloured dresses posed against a sparse backdrop of lush fields and moody rock formations. The clothes are made from more sustainably sourced materials like archival fabric, organic cotton and sustainable viscose. In video shorts posted on Instagram, models including Amber Valletta list different ways to save the world (“Get rid of all guns,” and “besides being kind and grateful, we should definitely make sure that we can feed everybody on this planet.”)

Despite the association with activism, the message is delivered gently with little reference to some of the more challenging initiatives called for by Extinction Rebellion. Valletta poses in a non-biodegradable faux-fur coat as she ticks off her five ways to save the planet, which are distinctly non-confrontational.

Still, the brand’s 6 million Instagram followers provide a powerful bullhorn to the movement. Valletta’s video has been viewed more than 51,000 times since it was posted on Tuesday.

“These hardline rules about not buying new clothes, while I can adhere to them, so many people don’t feel they can commit to this lifestyle,” said Tori Tsui, an Extinction Rebellion activist and photographer/film-maker who participated in the campaign. “The message of the campaign is aiming to highlight what we need to do to protect the planet… It’s another signifier that climate activism is going mainstream, which is huge.”

The association is a particularly interesting development just one week after it emerged that LVMH Moet Hennessy Louis Vuitton has taken a minority stake in the brand, citing its focus on sustainability and ethical issues as a “decisive factor” in the investment decision. While LVMH remains a traditional bastion of French luxury, having a more activist label within its stable of brands fits well with the current consumer climate.

“It can be helpful to the corporate parent brand to have some brands that are very, very purpose-driven and activist-associated,” said Gaines-Ross. “It’s certainly a way of saying, ‘we give our brands freedom to be who they are, and we do think that certain societal issues, like climate change, or pay equity, or things like that, are important.'”

It’s another signifier that climate activism is going mainstream, which is huge.

Still, for some, the campaign missed an opportunity to do something more ambitious, to drive greater change and a more meaningful conversation.

“It could have been a lot punchier,” said Interbrand’s Robins. “ You’re looking for more of a call to action — something with a bit more grit and gumption.”

The delicate treatment of a hot topic speaks to the fact that activism is often not an easy or comfortable line for brands to walk. Many brands have stumbled in their efforts to engage with the political zeitgeist, attracting ridicule and criticism, rather than stimulating debate.

For its Spring/Summer 2015 show, Chanel created a faux protest, parading models down the runway carrying feminist placards in a move that sparked debate over whether the brand was appropriating feminism to sell designer handbags. Similarly, Maria Grazia Chiuri’s debut collection for Dior in 2016 featured a $700 slogan t-shirt that read ‘We Should All Be Feminists;’ though the designer has won over early skeptics by donating a proportion of the profits to charity and consistently highlighting female empowerment in her collections.

“If you’re a brand aligning with an issue, you better be sure that it’s very authentic,” said industry consultant Julie Gilhart.

On the other hand, brands that get it right, can win big. “In the past there’s been a lot of fear, but now because these issues also have a lot of consumer attention it is maybe beneficial for a brand to align with certain issues,” Gilhart said.

In Trump’s America, the Price of Speech and Silence
The Thorny Business of Brand Activism
With Betsy Ross Sneakers, Nike Puts Money Where Its Mouth Is