LONDON, United Kingdom — On Saturday in Paris, the gavel came down on two weeks of fraught talks, resulting in a landmark agreement between representatives of 195 countries to cut emissions of greenhouse gases.

The deal, which comes into effect in 2020, aims to ensure that global warming does not exceed 2 degrees C above pre-industrial levels, with an additional aim to cap this at 1.5 degrees C. A temperature rise of 2 degrees C could could result in catastrophic environmental changes, such as extreme weather, accelerated melting of the polar ice caps and dangerous rises in sea levels.

As the first universal agreement on climate change, the Paris deal sends an important signal that all countries — including developing nations like China and India — are committed to a low-carbon future. The private sector, too, has a part to play — and supporters of the agreement are optimistic that it could encourage business leaders to turn away from fossil fuels and invest in renewables with confidence.

But what does the agreement mean for the fashion and luxury industries?

“This agreement marks a transformative moment on the journey towards a low-carbon economy, providing the certainty and confidence businesses need to continue to pursue positive climate action,” says Hannah Jones, chief sustainability officer at Nike.

Pierre Börjesson, sustainability business expert on climate at H&M concurs that the deal is a step towards a “safe environment with continued growth and increased quality of life for more people around the world.”

Before the agreement was announced, Eric Liedtke, who is responsible for global brands at Adidas, wrote to BoF: “World leaders forging an agreement is wonderful, but we shouldn’t need to be told to do the right thing. The industry can't afford to wait for directions any longer.”

That said, the Paris accord was more ambitious than many predicted — in particular, the additional aim to cut global warming to 1.5 degrees C. Will this spur companies to ramp up their existing environmental policies?

“We plan to align the next phase of our targets and actions to ensure that we can contribute to a 1.5 degrees world,” says Marie-Claire Daveu, chief sustainability officer and head of international institutional affairs at Kering, which will report on its 2016 sustainability targets in the spring.

In 2012, Levi Strauss & Co. committed to cut its greenhouse gas emissions by 25 percent by 2020. By 2014, the company had already done so by 20 percent. “That, along with this agreement, are driving the need to set more ambitious targets,” says Anna Walker, senior director of government affairs and public policy at Levi’s, which will update its climate strategy and targets in 2016.

Some sections of fashion companies’ supply chains present greater risks to the environment than others. “The impact of the raw materials stage is the most significant,” says Elisa Niemtzow, consumer sectors director at non-profit consultancy Business for Social Responsibility (BSR). “There are opportunities there to work with suppliers to improve practices and to ensure small producers are more protected and resilient in the face of climate change.” 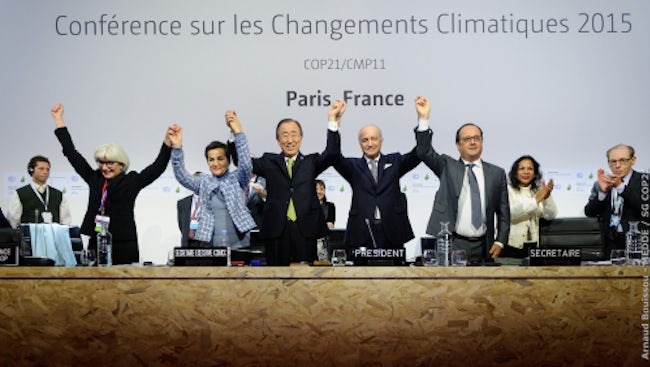 The agreeement is announced at COP21 | Source: Flickr/COP Paris

Indeed, raw materials like cotton and cashmere require huge amounts of electricity and water to produce, and are sourced in parts of the developing world that are particularly vulnerable to the early effects of climate change, such as increased flooding and droughts. Traceability in supply chains can also give companies a clearer view of the knock-on effects of their operations — for example, the production of rayon and viscose has been linked to deforestation.

Another high-impact part of the industry is in transport and logistics, where businesses can partner with their transport providers on route optimisation and choose eco-friendly fuels to reduce the impact of moving product around the world.

“Approximately 25 percent of the energy footprint is coming from the customer, after we’ve sold them the product,” adds Pierre Börjesson of H&M, citing tumble dryers and dry cleaning as key culprits. “We need to help and inspire customers to minimise their energy usage when they are caring for our products,” he says.

Cost of the climate

But transitioning to a low-carbon future requires investment. Can fashion companies cut carbon and keep up business growth?

“They have to make investments no matter what, so making investments in a way that’s much more sustainable for them in the long-term is just a much smarter way of thinking,” argues Emily Farnworth, campaign director of RE100, a programme set up by non-profit The Climate Group, to sign up companies to commit to using 100 percent renewable power. RE100 participants include Google, H&M, Nike, and Yoox Group. With renewable technologies “dramatically” dropping in price, “it’s often good business sense anyway,” she says.

According to Anna Walker of Levi’s, governments can help companies follow a low-carbon path. “We’ve found that where governments have incentivised and focussed on growing the renewables in their own countries, we’re able to do more, faster, to reduce our own emissions and make those investments in renewable energy as well,” she says.

However, concerns remain around the real costs that these investments will mean for businesses — and the extent to which governments will make the private sector accountable for its impact on the planet. There are no legal mechanisms currently holding companies to their sustainability goals — though that could change, as countries that are bound by the Paris agreement (which is, overall, legally binding) draw up plans to radically reduce their nation’s emissions.

For the moment, civil society provides a “check and balance” for companies, says Elisa Niemtzow.“It’s consumers who we see are increasingly seeking out that information,” she says.

Luca Solca, head of luxury goods at Exane BNP Paribas, concurs that companies must back up their storytelling with substance — or risk losing consumer trust. “Social media is making the houses we live in increasingly transparent. Paying lip service to issues like the environment and workers rights will be more and more difficult to get away with,” he says.

Some businesses are also partnering with cross-industry organisations and NGOs, which hold them accountable to targets. Kering and Tiffany have both committed to net zero emissions by 2050 through The B Team, a not-for-profit comprised of business leaders across different industries.

Social media is making the houses we live in increasingly transparent. Paying lip service to issues like the environment and workers rights will be more and more difficult to get away with.

As part of the Paris agreement, countries committed to raise $100 billion a year by 2020, to help developing nations mitigate and adapt to the consequences of climate change. Do fashion’s large, powerful firms also have a responsibility to share resources and help smaller businesses fight climate change?

“As one of the biggest fashion retailers, we have a huge responsibility to motivate parts of the value chain where other companies are influenced,” says Pierre Börjesson of H&M, who points out that this responsibility begins in its own supply chain, which is made up of smaller sourcing and production companies, many of which are based in the developing world.

“Just by virtue of companies being in these parts of the world and demanding renewables is giving confidence to investors,” says Emily Farnworth of RE100. By investing in clean technologies at scale, companies can also help make these technologies more affordable. “[Companies] have a really positive role to play in enabling this investment to flow through them.”

Pierre Börjesson adds that fashion brands can speed up tech advances that the whole industry can benefit from. H&M runs a textiles collection programme, which encourages customers to drop off old clothes in store, which the company then recycles. “The whole industry will gain from having more [textiles] returned, so we can get more leverage in the recycling industry, helping recyclists find ways of recycling more fibres,” he says.

However, industry-wide change requires companies to work together.

“The groundwork has been laid,” says Elisa of BSR, who points to groups like the Sustainable Apparel Coalition and the Better Cotton Initiative, in which fashion brands work together towards shared goals. “I think companies are getting out of the more traditional mind-set of secrecy — especially for luxury brands, that’s been the standard. They understand that to tackle a lot of the challenges, particularly when it comes to procuring commodities, you need to partner.”

“You need to have collaboration across borders — politicians, civil society, regions,” says Börjesson of H&M. Of the Paris deal, he says, “Getting this global agreement and a handshake all over the world will help us drive this change through the whole value chain: everything from the cotton farmers, to the customers that are wearing our products.”

For the fashion and luxury industries — whose supply chains rely on parts of the world that are already suffering the effects of climate change — the time to act is now. “We will have to become disruptive and find new ways of doing business. It is an exciting time,” says Marie-Claire Daveu of Kering. “The world will be watching how we all react.”