NEW YORK, United States — A few weeks ago, some Facebook users spotted a rare deal: shoes from Rothy’s, the direct-to-consumer footwear startup, for 50 percent off.

The discount, spotlighted via a targeted ad on Facebook newsfeeds, took people to a website that looked like the Rothy’s homepage, where shoppers were able to buy the company’s eponymous Meghan Markle-approved ballet flats for $79.99, instead of $145. Or so they thought.

The ads were a scam, and Rothy’s was inundated with complaints from shoppers whose credit cards were charged several times, without receiving any shoes. Rothy’s took the rare step of posting a warning about the scam and other similar schemes on its social media accounts a few weeks ago.

Counterfeits and knockoffs are nothing new in fashion, though the targets — usually luxury and sneaker brands — typically prefer to keep the problem out of public view. But the problem now dogs direct-to-consumer brands like Allbirds, Glossier and Rothy’s. These companies have found success by cutting out wholesalers and relying on social media to acquire customers. That model has proven wildly successful, but also creates an opportunity for copycats. 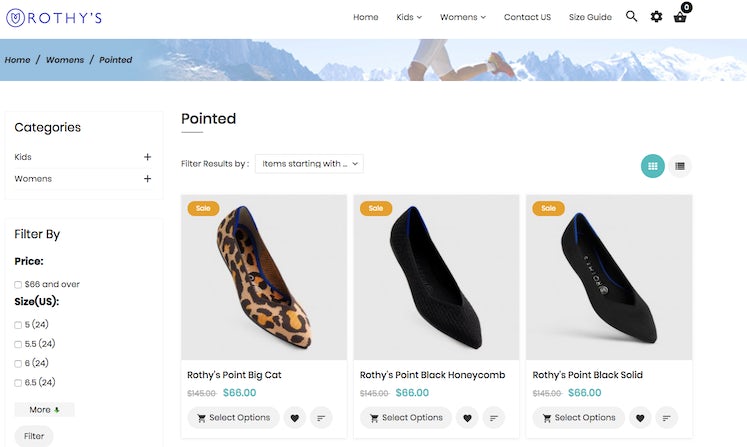 A counterfeit Rothy's site, Rothstore.com, selling counterfeit shoes for half off. | Screenshot by BoF

Fake DTC products litter Amazon, eBay, Instagram, Facebook and Chinese sites like AliExpress. Then there are the legal knockoffs, with companies like Zara, Fashion Nova and Steve Madden turning to popular start-ups for “inspiration” much like they rely on luxury brands’ runway looks.

“Counterfeiters go where the people go, from flea markets to the streets to stores to websites to social media,” said Maysa Razavi, the International Trademark Association’s anticounterfeiting manager. “Consumers now rely on social media to buy and discover goods, and counterfeiters are fully exploiting that. They are taking full advantage of the technology and beating these [DTC] brands at their own game.”

Fighting copycats can be treacherous and expensive, and most start-ups must take on clandestine counterfeit networks or battle with fast-fashion using a fraction of the resources of their luxury counterparts. Many digital brands are unprofitable, and need every cent of their investors’ cash for advertising, production and logistics, not court fights.

Counterfeiters go where the people go, from flea markets to the streets to stores to websites to social media.

But at a certain point, fighting back ceases to be a luxury and becomes a matter of survival.

“If you’re a design and research-focused company, you absolutely have to be monitoring this,” said Joey Zwillinger, co-founder of Allbirds. “Direct-to-consumer brands have much lower awareness in people’s minds. Most don’t know who they are or what they make, so counterfeits have a better opportunity.”

Why DTC is ripe for knockoffs

The global trade of counterfeit goods nets about a half a trillion dollars a year, according to the Organisation for Economic Co-operation and Development, with industries like clothing, footwear and leather goods getting hit the hardest.

The new wave of DTC brands are particularly vulnerable, experts say. Many rely on a single, easily imitated “hero” product for much of their sales. Their main way to reach customers is online, where fraud is rife (in a statement to BoF, a Facebook spokesperson said that it "takes IP rights, including issues around counterfeiting, very seriously" and that "when we detect an ad that violates our Advertising Policies we disapprove it"). And though many people buy fake Louis Vuitton bags because they can’t afford real ones, the buyer of lower-priced goods like Rothy’s might have otherwise purchased the real thing.

Although a pair of Allbirds Wool Runners or Rothy’s ballet flats aren’t particularly expensive, they are status symbols, making them inviting targets for fakes. Zwillinger said counterfeit Allbirds hit the market within a year after launching in 2016.

“There were people launching knock-offs on Kickstarter, and counterfeiters coming from Korea,” he said. “In Europe, there was even one company that somehow had found old molds we’d use, scraped our names off of it, and put those up on the internet.”

It’s not just profits DTC companies stand to lose. Customers who unknowingly buy counterfeit items, like those that shopped on the fraudulent Rothy’s sites, could badmouth the company.

Startups depend on word of mouth to build their business and reputations, and poor quality products floating around the internet spread misinformation.

“Startups depend on word of mouth to build their business and reputations, and poor quality products floating around the internet spread misinformation,” said Razavi with the International Trademark Association.

The DTC model has opened up brands for fraudulent activity. Glossier, for example, limits distribution to its stores and website. That’s fed an entire network of unauthorised sellers who have Instagram shops and websites that claim to sell Glossier products, said Erin Miller, the brand’s head of customer experience. Sometimes the sellers offer authentic Glossier product, but they are often mixed in with counterfeits, something Redditors have noticed is happening on Chinese websites sites like Carousell, and on eBay.

When it’s worth it to go after them

Allbirds pays for MarkMonitor, a company that searches for fraudulent and counterfeit activity. Most of the time, though, the brand won’t go after copycats, said Zwillinger.

“Going after a tiny brand that has no money or reputation that launched a knockoff doesn't do anything and will draw attention towards that brand, so why even bring it up?” he said. “It’s expensive and distracting. Even small ripoffs take a lot of resources.”

Experts say when it’s a big brand doing the copying, more action is required because the distribution of the knockoffs could be widespread enough that customers will eventually forget where the designs originated.

Bluebella spent about £10,000 ($12,200) on the whole ordeal, a significant amount for the brand, which only became profitable last year, after recording about $6 million in sales, according to Brand Director Janet Mudge. But she said the company’s leadership felt they had to take a stand.

“The spending was really painful because that was money we should have put back into our marketing and research, but we felt too emotional not to do something,” she said. “Not only are they stealing designs, they are also undercutting our price point tremendously. If you are a relatively small brand, it’s worth it for you to fight back because the damage to your company could be so much worse.”

If you are a relatively small brand, it’s worth it for you to fight back because the damage to your company could be so much worse.

The alleged imitators don’t always back down. Rothy’s sent a cease-and-desist order to Steve Madden in early August for selling shoes that it says closely resemble its Point flat. Steve Madden responded by suing Rothy’s.

“Rothy's is claiming exclusive rights to common elements of a ballet flat used by competitors and non-competitors,” Steve Madden Vice President and Deputy General Counsel Lisa Keith said in a statement. “Our company has been making this silhouette since the 90's, since before Rothy's even existed.”

Steve Madden took a different approach with Greats, another DTC footwear brand. Earlier this month, the company acquired the start-up.

Other ways brands can fight back

Many DTC brands have cultivated communities of devoted customers — a free army of sorts that can quickly smoke out copycats, said Stéphane J.G. Girod, a professor at the IMD business school in Switzerland

“Brands that don’t have a lot of resources should be using their loyal customers to be the ears and eyes of the internet to help them monitor the situation,” he said.

Miller said Glossier customers flag fraudulent products and unauthorised Instagram resellers to the company, which then informs the accounts that they have violated Glossier’s terms of service. Glossier said it also works directly with platforms like Instagram to shut down fake accounts.

Though shoes and makeup can be copied, a unique brand experience can't, said Renée Richardson Gosline, a research scientist at MIT’s Sloan School of Management who’s studied the counterfeit industry.

“Brands should be looking at all opportunities and touchpoints beyond the functionality of a product to stand out,” she said. “Louis Vuitton handbags are the most counterfeited item in the world but the real products are still in high demand because the customer experience cannot be replicated by counterfeiters.”

Brands should be looking at all opportunities and touchpoints beyond the functionality of a product to stand out.

This is an advantage a brand like Glossier has leveraged. The brand’s stores frequently have lines outside. Shoppers eagerly wait to try out the beauty products because they want the shopping experience and millennial pink-hued selfies as much as the Glossier product itself.

Allbirds sees widening its distribution as a way to fight counterfeiters — if anyone can buy the real thing, they won’t need to resort to fakes. In February it opened a store in Shanghai, and it also teamed up with Chinese e-commerce giant Alibaba to sell its footwear on the Tmall platform. Previously, the only Allbirds available via Alibaba were fakes or from unauthorised sellers.

“Being in China helps and hurts,” Zwillinger said. “Any success will mean there will be plenty more counterfeits because there’s more of a counterfeit industry in Asia. But … we are creating brand awareness and are able to serve Chinese customers who want the real deal.”

Ultimately, the best way to fight counterfeits is to stay ahead of them. In this, DTC brands have the advantage over luxury brands, because they are typically faster at designing and releasing new products.

“Speed is on their side,” Girod said. “Launch new products, faster, and shape the trends. Make them keep coming.”