The luxury brand has officially joined WeChat, China’s most influential social media platform, which is key to reaching the country’s digitally savvy consumers.

The luxury brand has officially joined WeChat, China’s most influential social media platform, which is key to reaching the country’s digitally savvy consumers.

PARIS, France — Following the appointment of a new chief executive, Severine Merle, in April, Céline officially joined Instagram and said it would be launching its first online store later this year. Now, the luxury-goods brand is venturing further into the digital space by opening an account on WeChat, China’s most influential social media app, which has more than 900 million active users — over half of China’s population.

Céline’s first post on WeChat on November 14, which has garnered 6,660 views and 75 likes so far, was an article introducing the Chinese audience to the ready-to-wear and leather goods brand. The second post, published a day after, promotes an upcoming pop-up in Shenzhen, and has accumulated 2,400 views and 17 likes at the time of publication.

So, why did Céline — known for its elusive online presence — jump on WeChat?

What makes WeChat so influential — and an ideal partner for fashion brands — is that it offers a seamless path to purchase, where the shopper never needs to leave the comfort or convenience of the app. Unlike other messaging services, the platform — owned by Chinese conglomerate Tencent — integrates social media, search and e-commerce all inside one walled garden.

“The idea that e-commerce and social media are separate is really not the case in China. Users are on apps at least 30 minutes a day,” Sébastien Badault, managing director of France at Alibaba Group, explained in a previous interview with BoF. “Nobody spends 30 minutes a day on the same site shopping. The thing is they are not just shopping. [Users are] interacting with each other, sharing pictures and asking for advice." 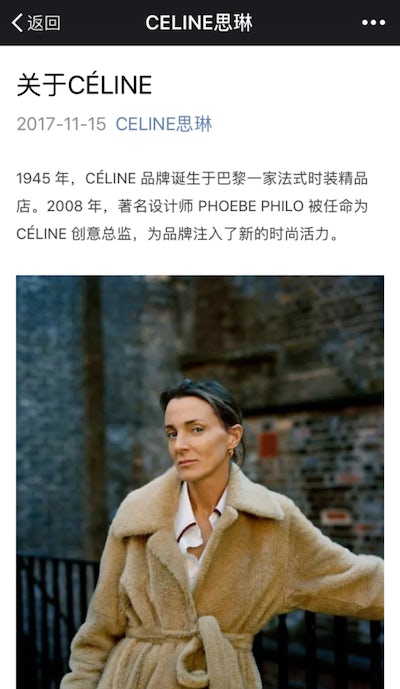 What also makes WeChat appealing for international brands — other than its reach to Chinese consumers, who made up 32 percent of the luxury goods market in 2017, according to consultancy firm Bain — is that it makes it easier for these companies to do business in the country, bypassing stringent licence requirements if business is only carried out on the platform.

“Céline is a true luxury brand and WeChat is a comparatively new platform. As a high-end brand, it’s natural that Céline wanted to step back and observe before making a move,” said Stella Song, partner at digital marketing firm SociaLight, whose clients include Prada, Mary Kay and Jessica Alba’s Honest. “I tell all my clients that if you want to be successful in the Chinese market, you have to use WeChat. That's the first step to enter China.”

It’s currently not clear whether Céline plans to sell products to its WeChat followers, and the brand was not able to respond to requests for comment. However, Yiling Pan, associate editor of Jing Daily — the online publication that first reported the news — argued that selling on the platform could harm luxury brands’ sense of exclusivity. “It’s fine for them to host flash sales on the app, but I think WeChat is much more than a sales platform,” she said. “The app’s real value for luxury brands is to manage the customer relationship and [integrate] the online and offline [experience].”

Céline is certainly not the first luxury brand to join the platform. LVMH’s Givenchy and Dior have tested demand for their goods on WeChat through flash sales, while Burberry, Tommy Hilfiger, Mulberry, Longchamp and Richemont-owned Cartier are among the brands that have already opened full stores. But beyond catching up with competitors, an official presence on WeChat can help Céline retain control of its marketing message in China, create personalised interactions with its target audience and directly manage customer relationships on the app — all of which could have a huge impact on brand loyalty if handled with care.

“It’s a way to better know your customers,” said Song. A common tactic is to offer users exclusive content or access to special offers. However, there are limitations to what brands can achieve. For instance, WeChat imposes a daily limit on how many messages brands can send to their followers. But the amount of control the platform allows its partners is understandably an appealing feature for a protective brand like Céline.

“Céline is, compared to peers, very late to the game, but it's a ‘better late than never’ situation,” said Avery Booker, co-founder and chief executive of Enflux, a social media influence-mining tool. “Now the ball is in Céline’s court to produce content that actually interests audiences and collaborate with the right individuals to ensure that its new WeChat account is more than just a digital billboard.”