PARIS, France — Chanel has inked a strategic partnership with fashion “unicorn” Farfetch, but the French luxury house still has no plans to sell its ready-to-wear and handbags online. The company is no stranger to digital marketing and sells its eyewear, fragrance and beauty products online, but has long resisted making core product categories available via e-commerce.

Instead, the tie-up with Farfetch will focus on deploying the company’s "operating system" for physical retail to enhance Chanel’s boutique experience. As part of the deal, Chanel is investing in Farfetch. The terms of the transaction were undisclosed.

“We are not starting to sell Chanel on the Farfetch marketplace — I want to be very clear on that,” explained Bruno Pavlovsky, Chanel’s president of fashion. “Our position on e-commerce is the same. We want to connect our customers with our product and our boutiques are the best way to do so. We are very consistent in our strategy, but we are using Farfetch’s know-how to accelerate this.”

“The mission of Farfetch is to reinvent the luxury shopping experience online as well as offline,” added Farfetch founder and CEO José Neves, describing the company’s plans to revolutionise not just e-commerce but the physical store experience with what it calls Augmented Retail. “Fashion cannot be digitised like music. The physical experience is going to continue to be where the majority of the action takes place.” 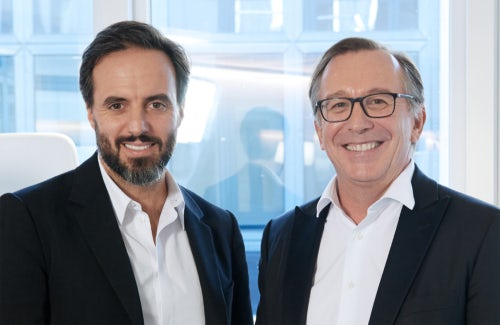 Indeed, while luxury e-commerce is growing fast, the portion of personal luxury goods purchases that happen online — now about 8 percent of total — is expected to plateau at about 20 percent by 2025, according to consultancy firm Bain. This means that, for the foreseeable future, most sales will still take place in physical stores, which have yet to really benefit from digital.

The initial fruits of the partnership will be unveiled at one of Chanel’s boutiques in France later this year, said Pavlovsky, noting that it will take “many years” to see the full results. “When you are in a long-term partnership, it won’t take place one day to another,” he explained. “We are talking about a transformation.”

“Imagine a customer can book an appointment through WeChat or Whatsapp and say they would like to come at two o'clock to see in the fitting room this silhouette or this bag or this shoe,” continued Pavlovsky. “If we want to enrich the customer experience, we have to think about a range of services like that. We need to have a relevant dialogue between the boutique and the customer.”

Farfetch’s Augmented Retail programme is still in its early stages, but last April, the company unveiled a few key applications to demonstrate its potential: a universal login that recognises a customer as she checks into a store; an RFID-enabled clothing rack that detects which products she is browsing and auto-populates her wishlist; a digital mirror that allows her to view her wishlist and summon items in different sizes and colours; a mobile payment experience similar to what exists in Apple Stores; and, of course, the underlying data layer that connects these services with each other and the Farfetch platform.

Luxury customers will require more personalised experiences, because that's the way they live their life.

Personalisation is a critical component of the strategy. “We are being educated by companies like WeChat in China and companies like Instagram on how to personalise experiences,” said Neves. “At Farfetch we are able to personalise user experiences thanks to all the data and insights we can gather, but then you go to physical stores and it's like being in the 1990s. Luxury customers will require more personalised experiences, because that's the way they live their life.”

The Chanel deal is the latest in a series of recent moves by the Farfetch, which has raised over $700 million in funding and is seeking scale as it gears up for an IPO. Neves has been reluctant to lay out a specific timetable for the flotation, but according to a source close to the deal, the company is planning to IPO in New York in September 2018 at a valuation greater than $5 billion.

In February 2017, Farfetch revealed that Net-a-Porter founder Natalie Massenet was joining the company as non-executive co-chairman. In April, Farfetch launched a 90-minute delivery service with Gucci and unveiled its ambitious Store of the Future concept, now called Augmented Retail.

In June, the company announced partnerships with both Condé Nast and JD.com, China’s second largest e-commerce player. In November, Farfetch teamed up with Fendi to launch a digital customisation service. And so far this month, Farfetch has entered into a joint venture with Chalhoub Group, one of the biggest distributors of fashion and luxury goods in the Middle East; struck a deal with Burberry to expand its global e-commerce distribution and launch a "show to door" London delivery service; and inked the partnership with Chanel.

“Part of our strategy is becoming what we call being a ‘global-local’ player. We have partnerships with JD.com and Chalhoub Group, and of course we will continue to develop the Farfetch marketplace, which is where Burberry fits in,” explained Neves. “But this a different pillar of our strategy and different kind of partnership,” he added, referring to the Chanel deal. “Augmented Retail is one of our pillars for the future.”

In 2016, Farfetch — a technology platform which connects consumers with a curated network of fashion boutiques and brands — cleared $800 million in gross merchandise value, generating an estimated $150 million in revenue (Farfetch takes 20 to 25 percent commission from partners). The company is not yet profitable, though the core marketplace product "delivered significant underlying profitability" in the fourth quarter of the 2016 fiscal year, according to Neves.

Chanel’s financials are closely held, but according to figures filed with the Amsterdam exchange, net profit at Chanel International BV — a Dutch holding company incorporated in 1979 that is thought to be a key part of the Chanel empire — fell nearly 35 percent in 2016 while sales dropped 9 percent to $5.7 billion. Analysts value the overall business at more than $20 billion.