LONDON, United Kingdom — From industrial looms to e-commerce, new technologies have remade the fashion world again and again. But oftentimes, new tech-driven innovations take too long to gain acceptance in this famously insular industry rooted in — and yet resistant to — change.

Fashion entrepreneurs who see the future before others have in the past faced ridicule, as was the case with some of the earliest pioneers of e-commerce, now the source of nearly all luxury market growth. And yet, as the pace of change intensifies and global epicentres of technology innovation, like Silicon Valley, take on a veneer of cool, fashion has become more open to innovation — at least on the surface. And herein lies the industry’s Achilles heel when it comes to technology. Too often, this cyclical, fast-moving sector, dominated by a trend-driven mindset, engages with new technologies on only a superficial level — as if they were new fads — before moving onto ‘the next big thing.’

From a certain vantage point, buzzy new technologies can appear to take off quickly. But for close observers who look beyond the buzz, their potential impact on consumer markets can often be grasped many years before, presenting companies that anticipate change with a tremendous advantage over competitors. Indeed, which senior fashion executive wouldn’t have liked to know over a decade ago, when Facebook was first founded by Mark Zuckerberg, the incredible impact social media would have on the industry?

This year, as we look into the future, three emerging technologies have the potential to reshape the way the industry does business, though their full effects may not be felt for cycles to come.

Messaging is set to blow past social media as the dominant online media activity, according to recent data presented by Michael J. Wolf, founder and CEO of technology and strategy consulting firm Activate. Already, about 2.5 billion people use messaging apps (a number that’s set to hit 3.6 billion by 2018). WhatsApp alone has a user base of over 800 million, while Facebook’s Messenger and Tencent’s WeChat have attracted over 800 million and one billion users per month, respectively.

But messaging technologies aren’t just expanding in scale. Much more than tools for free, instant exchanges with friends and colleagues, messaging apps are building platform layers to support new first- and third-party services, transforming them into hubs for everything from consuming content and playing games, to interacting and transacting with brands. Indeed, much of what users currently do on the web or with separate native apps — from buying a dress, to calling Uber, to personal banking — may soon be done in messaging apps, facilitated by sophisticated software-driven bots, which can complement interactions with human customer service agents.

According to David Marcus, Facebook’s head of Messenger, luxury brands are well placed to capitalise as their customers have a “strong affinity” with their favourite brands, making them more open to interact with them on messaging apps “where the brand is basically at the same level as all of your friends and your family, people that are nearest to you that you connect with every day.”

This kind of intimacy is incredibly powerful, enabling personal communication threads between brands and consumers that can be leveraged for “anything and everything you want,” said Marcus, pointing to a range of possibilities from personalised content distribution, to instant, seamless customer service exchanges. “It becomes this space that will exist for your lifetime as a relationship between the customer and the business, so the business always has context as to all of the previous interactions,” added Marcus.

Facebook’s Business for Messenger, which enables these kinds of exchanges, launched in the US last year and is set to roll out in Europe later this year. But to best leverage the possibilities these platforms permit and deliver innovative new services for top clients, luxury companies must find ways to better integrate their marketing, VIP services and digital teams, which are often siloed across the organisation.

From sunglasses to bag handles, many fashion accessories and their constituent parts are made using traditional industrial moulds. These rigid, hollowed blocks are filled with a range of liquefied materials — like plastic, glass and metal — which harden, adopting the shape of the mould. Once created, moulds can be used to cost-effectively manufacture large runs of identical products. But because traditional moulds often cost thousands of dollars to make, they are less useful for limited-run or individualised products. 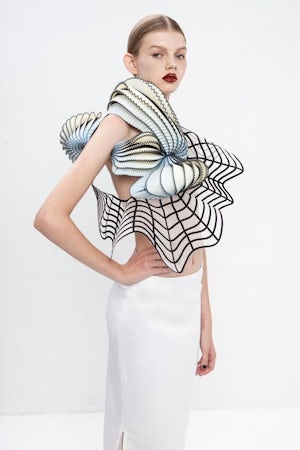 On the other hand, using computer-controlled ‘additive’ manufacturing techniques, like 3D printing, producers can ‘print’ objects in layers, from the ground up, based on digital designs. Because there is no upfront investment in traditional moulds, using these techniques, the per item cost of producing one of something is the same as the per item cost of producing 10,000, radically lowering barriers to entry for start-ups that manufacture in small quantities and making customised products much more cost-effective to produce. And while at high volumes, these tools are not as cheap as traditional mass production techniques, like injection moulding, they are becoming better and cheaper over time.

Indeed, fuelled by the expiration of patents on key techniques and lower prices for raw materials, the cost of 3D printing consumer products is falling significantly, and will result in a 50 percent drop in the cost of the average 3D-printed object between 2013 and 2018, according to Christian Hartung, CEO of VOJD Studios, a Berlin-based fashion jewellery label that harnesses 3D printing and has worked with Prabal Gurung, Akris and A.F. Vandevorst for Spring/Summer 2016.

Sportswear giants have been amongst the first to leverage 3D printing to create customised consumer products at scale. Nike, for example, has been experimenting with 3D-printed football boots, custom-made to individual feet, while Adidas, Reebok and New Balance have all unveiled their own 3D-printed models. But recent advances in finishing techniques mean 3D printing can now be used to create objects with the kind of smooth, polished surfaces more suitable to luxury fashion goods.

To become a practical means of manufacturing individualised, store-ready luxury products, however, the next generation of 3D printers must be able to better mix materials and finishes (currently, these types of machines are very rare and expensive). “At the moment, this is happening, but at the research level,” says Amanda Parkes, chief of technology and research at hybrid fashion incubator Manufacture New York.

Virtual Reality has long been the preserve of science fiction. Now, VR — a multi-media experience that immerses users in virtual environments — is finally coming to the consumer market. To be clear, VR is still far from mass adoption. Last year, Samsung, HTC and Google launched their first consumer virtual reality experiences. But market research firm CSS Insight estimates that only 2.5 million VR headsets and augmented reality glasses were sold by the end of 2015.

Yet Mark Zuckerberg — founder of Facebook, which acquired virtual reality startup Oculus Rift in March 2014 for $2 billion — aims to sell 50 to 100 million of the company’s head-mounted virtual reality displays in the next decade. Some believe this could radically transform the way people consume content, giving birth to new virtual reality marketing experiences.

Buzzy new technologies can appear to take off quickly. But for close observers who look beyond the buzz, their potential impact on consumer markets can often be grasped many years before, presenting companies that anticipate change with a tremendous advantages over competitors.

Even today, 13.3 percent of consumers make a transaction or sign up to communications from a brand while viewing VR content, compared to 5 percent for non-VR experiences, according to Abi Mandelbaum, chief executive officer of virtual reality tour platform YouVisit. Meanwhile, Matteo Caraccia, managing director of Big Sky Studios, which is producing a VR marketing campaign for UK department store Selfridges, sees an opportunity in what he dubs “v-commerce,” allowing consumers to shop from home, using a VR headset to “actually see the item they’re buying; you can walk around the item, lift it up.”

For fashion brands, which depend on selling not only products but also a dream, VR holds particular promise and a number of companies have been experimenting with the technology. The North Face and 7 For All Mankind have both created VR-enabled films, while Dior and Tommy Hilfiger have installed headsets in stores, which transport headset-wearing shoppers in pre-recorded catwalk shows. “In stores, you have to bring the customer newness and not just show clothes on the rack and wait until they buy,” says Daniel Grieder, chief executive officer of Tommy Hilfiger. “This is something customers will talk about.”

But for the moment, most of these initiatives trade heavily on the sheer novelty of the technology to generate positive PR, rather than the power of the content. “Reality hits when people get bored of the platform itself and the quality of the content becomes the compelling thing,” says Adam Powers, chief experience officer at advertising agency BBH. “There’s an awful lot of crap out there.”