NEW YORK, United States — Last night, two of Ralph Lauren’s flagship stores — the recently opened 888 Madison Avenue and the venerable 1 New Bond Street — became towering, real world canvases for an extraordinary “digital extravaganza,” designed to conjure up and communicate the world of Ralph Lauren at epic scale, demonstrate the brand’s dedication to digital innovation, and celebrate the launch of the company’s “digital flagship” in the UK.

BoF experienced the spectacle on both sides of the Atlantic, as digital projection mapping technology made both flagship buildings seem to suddenly disappear, then reappear, block-by-block, before they each opened up like a dollhouse to unleash a 3D parade of four-story tall models, a gigantic virtual polo match, and larger-than-life products. As a collection of perfume bottles appeared, the air was filled with Ralph Lauren’s Big Pony fragrance, giving the event what the brand called a “4D twist.”

A cross-disciplinary team of about 150 people worked for months on the 8-minute experience. First, intricate architectural renderings of the New Bond Street and Madison Avenue stores were created, using 3D scanners and human modelers. Then intricate physical replicas of the stores were built on a Hollywood-style soundstage where real life models were shot walking in front of the façade. The film was then pulled into a 3D software environment where a team of animators (some of whom worked on the Harry Potter films) designed and inserted the giant-scale visual effects. Finally, video “beamers” were painstakingly positioned, so that the projections of the finished 3D film, created at a larger resolution than IMAX, lined up perfectly with the real building.

To be sure, the final effect was exciting. But needless to say, staging this kind of extravaganza required a significant investment — estimated to be more than six figures — on the part of the brand. What was the thinking behind the initiative? What were the underlying objectives? And how does this kind of digital technology fit into the world of the Ralph Lauren brand?

Last week, in a preview of Ralph Lauren's biggest digital initiative ever, BoF sat down with David Lauren, senior vice president of advertising, marketing and corporate communications, to get the exclusive back story for BoF readers.

BoF: Your father often says: “I’m not designing clothes, I’m creating a world.” How does digital technology fit into this world?

David Lauren: What we do as a brand is we tell stories. We create an environment: dogs, houses, cars — an entire experience. When you walk into a store, you’re walking into old world mahogany. The kayak is on the ceiling and all that. But we can tell that story better online. We can give people the ability to step into that experience. What I call “merchantainment” is the seamless blending of merchandising and entertainment. It’s what we do in our stores. It’s what we do in our ads. When we run those ads, we get thousands of calls saying: what kind of dog is that? What kind of car is that? What kind of house is that? Can I book a trip to that golf course? When you go on our site, you can do all that. That’s why technology is now seamlessly integrated into what we do. It’s allowing us to fulfill our original intent: to tell stories and let you step into that world. 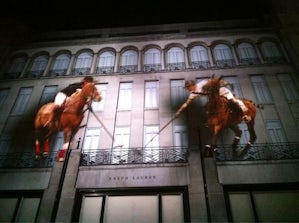 BoF: How was the idea for the 4-D light show born?

DL: We discovered a new technology up in Amsterdam called digital mapping and we decided to take this to America and blow it out of the water, on a scale not seen before. The Guggenheim just did light projections on their building, but they’re not 3-D. This is like Avatar but without the glasses.

People can say: well, what does that have to do with Ralph Lauren? But just like fashion is cutting edge, it’s about knowing the next trends and getting ahead of those trends. We weren’t satisfied with a single spread in a magazine. That doesn’t mean anything to us. We want to be on the cutting-edge. The same way we saw QR code technology and brought it to America, we saw this new technology and thought: what could we do to take it to the next level?

We’d built this beautiful new store on Madison Avenue, it’s a pretty significant store, a Beaux-Arts mansion. And we wanted to bring it to life in very cool way. We’re calling it the collision of fashion, technology, art, commerce and architecture. That contrast of old world sensibility with modern technology is what we’re after.

BoF: This is such a huge event that there will be reverberations, both online and off. But how do you leverage that in a commercial way that makes this larger-than-life event work for the business?

I think it’s something that people will be talking about for a while to come. It’s unique enough that people will hear about it. And by the way, for us, just the doing is an important exercise. It’s important that we are exercising our creative juices and doing things that move the company forward. We think that this is innately high profile and will generate its own viral buzz and discussion.

BoF: Is this a perfect example of merchantainment?

DL: Yes. You don’t expect a fashion company to do this. You expect a media or technology company to do this. And that’s how we see ourselves. This company can be anything. It’s part media company — it’s got online magazines and videos, it’s got fashion shows, it’s got everything. We sponsor the Olympics, Wimbledon, the US Open. Just when you think that’s for Nike, we show that it can be elevated.

BoF: If you are a pioneer, you are bound to run into problems. What was the biggest challenge?

DL: Two weeks ago, I saw some of the first renderings and I thought: “Oh my god, we’re in trouble.” The renderings weren’t good enough. Several members of our team flew to Europe. We hired more technicians, we brought in more artists. Creating ten seconds of this takes an entire day. We’re making movies here.

Expectations? Ralph Lauren has a history of pioneering digitally innovative consumer experiences. The brand’s early moves into mobile commerce, as well as its shopable window displays — letting consumers personalize and purchase shirts from the millennial-focused Rugby line, even when the store is closed — were particularly visionary. So when BoF first heard that Ralph Lauren was working on “a never seen before digital project” that was to be “like the movie Inception,” we were excited.

Familiar with the projection mapping experiments conducted by other brands, we suspected that the initiative would be similar to the installation staged by electronics giant Samsung earlier this year in Amsterdam. But it wasn’t until David Lauren talked us through the initiative, frame by frame and with great enthusiasm, that we realised the true scale of the undertaking. Expectations were high.

First impressions? This was fashion as entertainment spectacle. But perhaps more significantly, this was the digital world bursting free from 2-D screens to radically transform and intermingle with the physical world. The sense of new possibilities was palpable and instantly brought to mind the words of visionary author William Gibson: “One of the things our grandchildren will find quaintest about us is that we distinguish the digital from the real, the virtual from the real. In the future, that will become literally impossible. The distinction between cyberspace and that which isn’t cyberspace is going to be unimaginable.”

Most potential? Ralph Lauren is perhaps the world’s most cinematic luxury brand. Indeed, Ralph Lauren himself is famous for comparing his collections and stores to movies and novels. While this event may only hint at what’s to come, we think the potential to use immersive 3-D technologies to bring brand stories to life is truly revolutionary. We also think this event could inspire Ralph Lauren (and other luxury brands) to fundamentally re-imagine their flagship stores — in which they have invested untold millions — as hubs for interactive experiences that create both digital and physical connections with consumers. Over time, this type of event could become the ultimate retail experience.

What’s missing? Ralph Lauren is perhaps most famous for creating and communicating an entire world through the power of storytelling, an approach that has brought the brand tremendous success. All the more surprising, then, that what this sequence of giant-sized models, polo horses and products lacked most was a compelling narrative. While the overall undertaking was impressive, and Ralph Lauren deserves credit for pioneering the use of projection mapping in the fashion industry, new technology alone does not make a powerful consumer experience. Subtract the technology from the equation and you have spinning products and giant perfume bottles, but no lasting emotion or feeling.

While the London event was meant to mark the launch of Ralph Lauren’s “digital flagship” in the UK, the brand could also have made more effort to build pre-event buzz amongst end consumers and failed to directly link the 4-D experience to the new e-commerce site. Neither the physical experience, nor the quiet announcement on the brand’s Facebook page, drove enough real consumers to these amazing events, which were mostly attended by industry insiders.

In sum, we think the brand missed an opportunity to capture value by embedding natural opportunities for commerce and consumer engagement within the digital extravaganza. One wonders what might have been possible had a larger consumer audience, armed with iPhones, been assembled and enabled to actually influence and interact with the digital spectacle — and perhaps even buy products.