NEW YORK, United States — Throughout the year, Proenza Schouler designers Jack McCollough and Lazaro Hernandez and their team use Instagram to communicate with more than 342,000 followers, posting images that represent the world of the brand. But as fashion week kicks off, the Proenza boys, as they are known in the industry, are upping their game.

For Spring 2016, the designers have partnered with reportage and portraiture photographer Landon Nordeman to capture and convey the brand’s take on the season with a total of five images posted over five days. “This project explores different elements of our design process: everything from more abstract inspiration and research, to sketching and sample making in our atelier,” Hernandez says. “It is a more intimate look,” McCollough continues. “We wanted to show the attention to detail and how things are made, which are often overlooked." 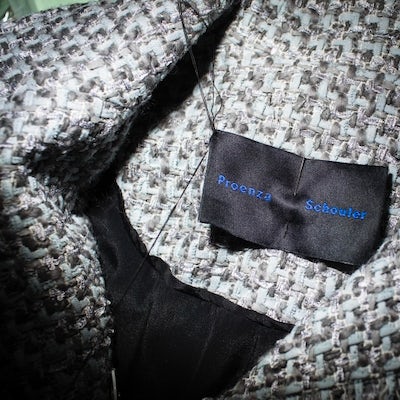 Hernandez calls Instagram the “perfect platform for innovative storytelling.” But he and McCollough are certainly not the only designers to think so. As the highly visual Instagram has emerged as fashion’s social media platform of choice, brands have become savvier about how they leverage the app to impress and engage followers — especially during ‘fashion month’, when the stakes are higher than ever. Indeed, last season, from February 12, 2015 to March 12, 2015, fashion week-related images attracted over 140 million likes and comments, according to Instagram.

In recent years, as the transparency of the Internet has transformed seasonal fashion shows from closed industry events into consumer marketing spectacles, brands with the budget to spare have begun creating elaborate runways designed to attract Instagrams, perhaps best exemplified by Chanel’s infamous grocery store set (Autumn/Winter 2014). Some of these spectacles cost millions of dollars to stage, yet brands are also coming up with creative solutions that don’t require vast investments. "We always challenge ourselves to be forward-thinking and I think our playful show concepts have organically lent themselves to today's flourish of Instagram moments, but we don't particularly plan moments with this in mind,” explains Opening Ceremony co-founder and creative director Humberto Leon, whose brand account has attracted more than 623,000 followers. For Autumn/Winter 2014, Opening Ceremony poured 4,000 pounds of melted chocolate down a wall as the backdrop to its show, then, the following season, presented its collection with a play directed by Spike Jonze at New York's Metropolitan Opera House. "What's remarkable about Instagram is that it's a progressive platform able to capture these real moments, pushing the limits, allowing unique experiences to be shared across a broader channel, even outside of fashion. It's aligned with our ethos and spirit in its creative and inclusive approach.”

While tracking return on investment is tricky, an organic increase in followers and engagement on posts are reason enough for many brands to keep committing time and resources to enhancing their Instagram feeds. “The value of visual storytelling is high,” says Rachel Tipograph, a social-media advisor and founder of shoppable video app MikMak. “Initially, it’s about brand building as opposed to conversion.”

Instagram, which was acquired by Facebook in 2012 for $1 billion, is the most important social media platform for many fashion brands. Louis Vuitton has attracted more than 6.6 million followers. Victoria Beckham: 6.6 million. Chanel: 6.3 million. While these statistics may pale in comparison to the number of likes that those same brands have attracted (or purchased) for their Facebook pages — Louis Vuitton, for instance, has 17 million Facebook likes — they signal a real opportunity for designers to make an impression on an audience hungry for compelling content. Indeed, according to a recent report by Exane BNP Paribas, for luxury fashion brands, Instagram produces significantly higher consumer engagement at 93 percent — measured as the combination of likes and comments — than posts on either Facebook (six percent) or Twitter (one percent).

While it’s true that creativity goes a long way, those who are paying up are amongst the best performers. Michael Kors, which posted the first-ever Instagram ad in 2013, is the clear leader in terms of likes. In the second quarter of 2015, it had eight of the top-ten performing posts of the brands covered by Exane BNP Paribas, with the most popular post attracting more than 170,000 likes. (Chanel filled the other two spots.) But for brands like Kors, the threat of overexposure can be real, according to Luca Solca, head of luxury goods at Exane BNP Paribas. “It can impact desirability very negatively,” he says. “Luxury is about selling (the illusion of) exclusivity. According to Solca, brands that are “punching above their weight,” include Kors, Valentino — which posts more frequently than its competitors on average — Dolce & Gabbana and Dior. Brands “punching below their weight” include Balenciaga, Tory Burch, Hermès and Tod’s.

“Instagram has become the water cooler of the fashion community,” says Eva Chen, the company’s new head of fashion partnerships, who was appointed in July after stepping down as chief creative officer of The Lucky Group, a joint venture formed between Condé Nast’s Lucky Magazine (where Chen was previously editor-in-chief) and e-commerce start-up BeachMint. “An image on Instagram can define your collection.” Chen joined Instagram to lead the company’s brand partnerships in the fashion space, working with everyone from emerging designers and big brands to stylists, makeup artists and models, to help them craft unique stories on the platform.

Instagram has become the water cooler of the fashion community.

Of course, successful fashion accounts on Instagram are as good for the platform as they are for their owners. “It’s clear that Instagram is becoming the number one media channel in the world,” Tipograph says. “Premium content allows them to raise their CPM [cost per thousand advertising impressions].” As Instagram expands its partner offerings — including a shop button that allows viewers to click straight through to an advertiser’s e-commerce site, as well as Facebook-powered targeting — it’s important that the content around those ads looks great. While megabrands like Burberry and Michael Kors already buy Instagram ads, most runway designers have yet to make the leap. But Instagram leverages the content of non-advertisers to create a halo around the platform.

To make it easier for brands, advertisers and casual users alike to post great photos, Instagram continues to make small tweaks to the platform, most recently allowing users to post portrait and landscape photos instead of only squares. On Friday, the company will also launch a “Best of Fashion Week” section on its Explore tab, which will curate the best fashion-related images of the week.

But how can designers stand out on Instagram during the Spring 2016 shows? “If you think about all the images from fashion week, when you look at the arc of the story of a show unfolding, a lot of people get the same perspective,” Chen says. In order to distinguish a collection from that endless scroll of blurry runway images — and even more polished-and-professional photos taken in house — some brands are dreaming up new ways to approach the medium.

Proenza Schouler chose to invite followers into their private world. For designer Misha Nonoo, the goal was to fully democratise the concept of a fashion show. At 10am EST on September 12, the British-bred, New York-based designer will host the first official “Instashow” in lieu of a live presentation. “A fashion show is so location-specific and for a rarefied group. I wanted to be more global and more inclusive by inviting the consumer to watch at the same time as press and buyers,” she says.

To help drive followers to the show-specific account, @mishanonoo_show, Nonoo has enlisted a mix of friends and influencers to promote the virtual event. Each woman — including political consultant Audrey Gelman, stylist Tina Leung and Harper’s Bazaar executive editor Laura Brown — will post a photo of themselves at 10am wearing a look from the collection. The lookbook, shot at Pioneer Works in Red Hook, Brooklyn, by photographer Matthew Kristall, will populate the account in a grid collage. “It’s a way to be authentic and speak to people,” says Nonoo, whose main Instagram account has about 34,500 followers. Everyone has his or her particular medium. For me, it’s Instagram.”

Instagram is eager for designers to develop one-of-a-kind concepts around fashion shows, encouraging top-tier brands to host InstaShoots — event-specific photo shoots that are published only on Instagram — each season. Stella McCartney developed her first InstaShoot on a trip to Seoul, Korea, in May. The playful series, a shoot-within-a-shoot concept, has garnered more than 33,000 likes combined. “In Seoul, there is such a unique local community,” says McCartney, whose account boasts more than 1.6 million followers. “We wanted to create unique and inspired content, allowing our interaction within the local community to grow."

Calvin Klein, which has 2.2 million followers on Instagram, posted its first InstaShoot during the Spring/Summer 2015 shows and has seen continued growth and engagement each season. (One of the five videos posted from the first series was the brand’s most-commented Instagram post about the show.) The Autumn/Winter 2015 series became the brand’s highest-performing social content during New York Fashion Week, with 120 percent higher-than-average engagement per post and accounting for approximately a quarter of total engagement for the brand that week.

For Resort 2016, photographer Simon Cave and cinematographer Stuart Winecoff captured model Grace Hartzel in women’s creative director Francisco Costa’s collection, which was inspired by the work of New York-based artist Alice Lancaster. “We’re looking at how we can best present the collection — its aesthetic, structure, silhouettes, detail — in a way that truly communicates the creative process behind it,” explains Calvin Klein chief marketing officer Melisa Goldie. “The goal was to produce elevated creative content that would ultimately result in growth and increased engagement. We have found that our Instagram audience responds to original content that is both beautiful and of-the-moment.”

The Calvin Klein team has another InstaShoot in the works for Spring/Summer 2016, as do a number of other designers, including Rodarte, J.W. Anderson and Moschino, with additional brands taking up the tactic daily. While most are mum on their plans, Moschino creative director Jeremy Scott, whose novel, humorous collections seem to be made with Instagram in mind, emphasises the importance of the platform to his vision. “It’s not a secret that I love Instagram. I’d say I’ve probably already been doing this to some degree,” says Scott, whose personal account boasts one million followers, while Moschino’s has 1.8 million. “I don’t want to reveal what I’m doing as it will tell too much about the theme of my collection, but it’s going to be of movie set proportions.”

While InstaShoots are attracting attention, expect to see designers reveal alternative approaches as the season unfolds. That may include tapping Instagram-famous talents to help disseminate their vision to the community. Indeed, the influencers that brands work with are as important as the images they publish. According to Exane BNP Paribas’ analysis, The Blonde Salad’s Chiara Ferragni, Vogue Brasil and Swedish socialite Malin Kansakangas’ Up Close And Stylish are the most important influencer accounts on the platform overall. Kendall Jenner has been a top driver for Fendi (with 988,141 social actions per post), while American pop star Demi Lovato (809,364) has boosted social actions around Céline, which itself abstains from social media. Cara Delevingne is a boon to Saint Laurent (742,154), while Khloé Kardashian supports Dior (686,365).

For the past few seasons, Dior has tapped Instagrammers @Hirozzzz and @Parisinfourmonths to uniquely capture its runway, and plans to do so for the Spring/Summer 2016 season. Earlier this year, Gucci creative director Alessandro Michele asked London-based artist Helen Downie — better known by her Instagram handle, @unskilledworker — to paint portraits inspired by his Autumn/Winter 2015 collection, while Giambattista Valli invited the Paris-based illustrator @vincentmoustache to sketch his latest couture collection. “Within the platform, there are creators who are famous with tens of thousands of followers. They offer a fresh perspective,” Chen says.