NEW YORK, United States — The virtual closet organiser space is littered with apps and websites that promised to revolutionise the way women shop and organise their own closets, only be to be stunted by tiresome methods of uploading items and their images. Platforms like Editeur and ClosetHQ have attempted to remedy the problem by taking a full-service, but expensive, approach while labour-intensive apps like ClosetSpace and Stylebook have failed to gain steam because the technology was clumsy, especially in relation to image editing.

“Is there no winner because it isn’t something that people want?” asks Whitney Casey, a former television anchor and author. “No…There’s no winner because there was no tech approach to it.” On March 23, Casey is launching a new platform named Finery that organises, styles and manages a user’s existing wardrobe. It employs patent-pending software to harvest data that already exists online and bypass the manual labour required by its predecessors. She started working on the technology with a developer a year-and-a-half ago to fulfill a personal need for a simple program to help her maximise her closet and plan outfits. If it works, it has the potential to optimise the way women get dressed and shop.

Frustrated by the response of predominately male venture capitalists after self-funding the initial stages of the company, Casey raised one seed round that closed four months ago from four female angel investors: model and actress Brooklyn Decker, who oversees Finery’s branding; Miroslava Duma, founder of culture website Buro 24/7; her partner, Nasiba Adilova; and one unnamed angel investor. Casey declined to disclose the amount raised or the current number of beta users, but says the base is statistically relevant. “You really only need ten thousand users to make really amazing assumptions with data,” she says. 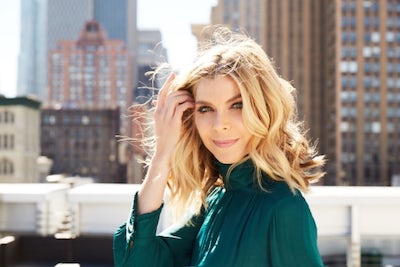 Finery differentiates itself from other competitors in the space by relying on a proprietary email parser that searches user inboxes for purchase order confirmations and transforms that data into a visual catalogue of items (much like an e-commerce shopping feed) that can be organised into looks. Casey describes it as TripIt meets Mint and Slice — meets Polyvore. “It runs in the background,” says Casey. “It’s so much smarter than what’s out there now.” Finery counts Leandra Medine and Lauren Santo Domingo as beta users.

“We found the pain point to be 20 percent: if we couldn’t get 20 percent into a person’s closet, they weren’t going to use our product,” says Casey. “That’s when we realised we had to go back 10 years into their purchase history.” The older the order confirmation, the less comprehensive the data. But Casey says the receipt parser is 100 percent accurate on product data and 85 percent accurate on picture matching, and Finery imports extra images in order to try to account for the margin of error.

Purchases made in store can be added after the fact through a one-click browser extension that works on 550 e-tailers, including Shopbop and Net-a-Porter. Finery also sends users return reminders on recent purchases and requests price adjustments from retailers on behalf of users if another seller is offering an item at a lower price— hence it requires a rather comprehensive email access approval request. Casey argues it is still less invasive than Mint, a personal finance management service that requires access to user bank accounts.

It’s not a perfect product. For instance, if a user has a habit of deleting receipts or shopping second-hand, the uploading process quickly veers towards being more trouble than it is worth. Casey insists, however, that there is an “elegant workaround to all of these things.” Users can link their individual retailer accounts to Finery or upload their own photos to an image recognition software that can tag basic details, like material or heel height.

We’re not trying to say, ‘Don’t buy anything.’ We are trying to make you really optimise what you have.

Another differentiator is Finery’s recommendation engine, still in development, that will machine learn from both the shopping habits of other users and a database of over 1.5 million blogger images of tagged outfits to suggest outfit combinations. The platform will become smarter over time, taking into account what is already in users’ closets, on their wish lists (also populated by the browser extension), recent purchases, current clothing size and monthly budget. Users can search the extension-supported retailers for product they don’t already own as they style their own looks, which can be saved for planning and packing.

“We’re not trying to say, ‘Don’t buy anything.’ We are trying to make you really optimise what you have,” says Casey. Right now, the average user joins the site with 250 to 300 items in their closet, an average value of $20,000.

Currently, Finery only makes money through affiliate links, but Casey has plans to create a “machine-curated, peer-to-peer marketplace" in the future, where users can sell, trade, donate or borrow items. It will monetise multi-party trades within the platform’s user base and hopes to partner with with established resale sites such as The RealReal and Vestiaire Collective to facilitate sales. For now, however, the platform is focused on growing its user base.

“It’s everything you can do with your clothes in one place,” says Casey. “But to have a marketplace, you need to have users.”

Solving the Closet Crisis for the World's Wealthiest Women