RANCHO PALOS VERDES, United States — Mary Meeker has attained almost legendary status for her annual Internet Trends reports. Yesterday, the former Wall Street technology analyst, now a general partner at venture capital firm Kleiner Perkins Caufield & Byers, published her latest report on the state of the web, covering aggressive momentum in mobile, the rapid emergence of new technology platforms, including wearable computing, and the staggering growth of the Internet in China, with implications for all sectors, including fashion.

The continued growth of mobile Internet usage is perhaps the most powerful theme in Meeker’s deck. Global mobile traffic as a percentage of total Internet traffic, which surpassed 15 percent this month, is growing at a rate of 1.5 times per year and is likely to maintain this pace or accelerate, according to the report. 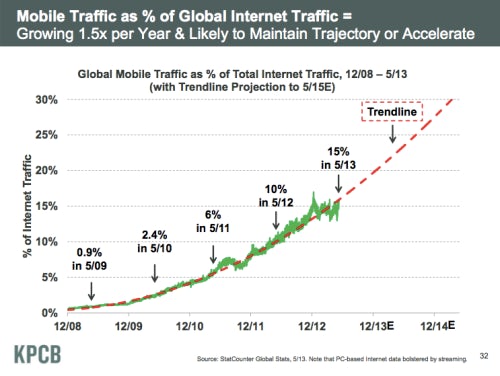 But considering the amount of time consumers are now spending on their mobile devices, mobile advertising spend remains disproportionately small when compared to spend across other media, indicating an untapped opportunity for brands and publishers alike. Indeed, for fashion companies without a well-defined mobile strategy, now is clearly the time to act.

Tablet adoption is growing rapidly as well. In the last quarter of 2012, tablet shipments surpassed those of desktop PCs and notebooks for the first time. What’s more, in the first 12 quarters since launch, adoption of Apple’s iPad grew three times faster than that of the highly popular iPhone.

But while adoption of smartphones and tablets continues to grow, we are already rapidly entering the next major technology cycle, according to the report. “Wearables, driveables, flyables and scannables” are coming on stronger and faster than previous technology cycles, observes Meeker. Indeed, in the fast-approaching future, computing will find its way into a wider and wider range of devices, from connected cars to programmable personal drones.

But for the fashion industry, the most powerful part of this coming cycle is undoubtedly wearable devices — personal accessories with embedded sensors, displays and other digital technology, such as Nike’s FuelBand, Google’s Internet-connected eyewear and Apple’s rumoured iWatch. Importantly, when it comes to wearables, consumer adoption will depend heavily on the stylistic and social value of these devices, not just their functional abilities, a significant opportunity for fashion and luxury brands that have a deep understanding of how to create desirable personal accessories, but have thus far been absent from the space. 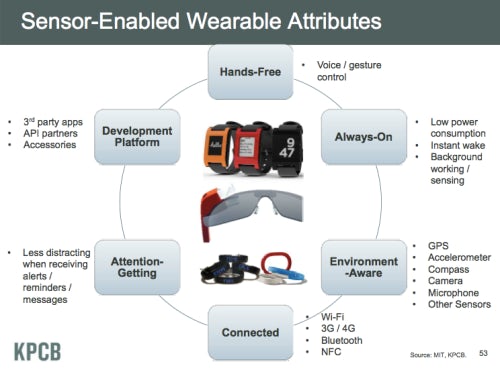 While Meeker declines to put a number on the future size of the space, she notes that new major technology cycles often support 1o times as many users and devices as previous cycles. While mobile devices now number in the low billions, Meeker suggests that wearables and other forms of ubiquitous computing could potentially move over 10 billion units.

In China, most fashion and luxury brands have placed tremendous emphasis on physical retail. But China’s web usage is now greater than that of the United States. In fact, China now leads the US in terms of time spent on the Internet and mobile devices compared to other media, while the number of iOS and Android users in China surpassed those in the US in the first quarter of 2013. What’s more, in the last quarter of 2012, the volume of merchandise sold on the Internet properties (including Taobao Marketplace and Tmall) owned by Alibaba, China’s largest e-commerce and online payments firm, surpassed that of Amazon and eBay combined. For even the smallest international brands targeting China, the scale of the e-commerce opportunity is now much too large to ignore. 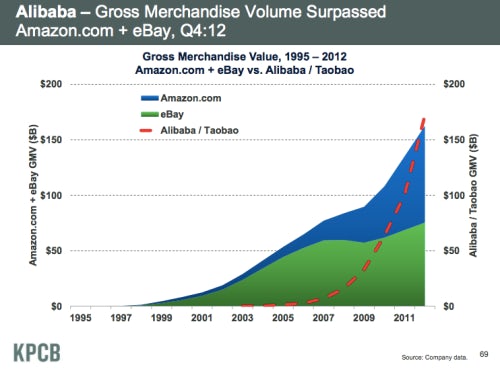