SAN FRANCISCO, United States — Fiona Frills isn’t a household name, but to the 800,000 people who follow her online, she’s a superstar. From her home in California, the bubbly 14-year-old spends her days sharing videos of her favourite products, from brands like Gucci and La Mer to Brandy Melville and Beautyblender. “My audience is especially interested in mascara. They want to know which ones stay in place, which ones are waterproof… it’s hard to find a good mascara by yourself,” she gushed. But despite the size of Frills’ following, when monetising her audience, she faces a hurdle not uncommon to other digital influencers: platforms like YouTube and Instagram rarely drive direct sales.

Enter Eight TV: an addictive new video shopping app launched in August 2017, which hopes to change that. On Eight, users record one-minute live videos that offer reviews of products from lip scrubs to books and puzzle games. All videos are linked to an online retailer to purchase the product. The app currently pulls in more than 300 million products from Amazon’s database. “It’s like Amazon and YouTube had a baby and you could finally buy product through video,” said Frills, who has taken to Eight. In fact, over the past six months, the teen creator has directed over 11,000 clicks to retailers such as Amazon and Sephora through affiliate links entered on the platform.

For the creators of Eight, anyone can become a star. “We had our a-ha moment when we were working with vloggers to create YouTube banners and help them edit and film videos,” said Chris Knight, who previously worked on digital and app development for Harrods and Condé Nast Traveller, before co-founding Eight with Leon Crutchley, formerly director of product innovation for Avira, one of the world's largest software companies, and Stephanie Queralto, who is also Eight's chief executive. “It’s very time-intensive to create a YouTube channel. We thought, why does it have to be this hard? That’s where the idea came from. It’s like YouTube but we’re making it a thousand times easier.”

Just as much community is being formed as product is being sold.

The app has also taken a page from another buzzy start-up, HQ Trivia, by launching a daily live show called “The Daily Drop”, which gifts users with free or discounted products every day at 5pm Pacific Time. A host is available for questions and responds with video replies that can be viewed by anyone. It’s similar to HQ drawing people into its app twice a weekday for live trivia with a cash prize. “Much like QVC, brands send us products so that we can present them and talk about them, while offering users access to these products,” said Knight.

Eight takes about 20 percent of each sale. So far, the San Francisco-based company has 50,000 monthly active users, the majority of whom are teenagers, who open the app over 10 times a day. In January, the firm shipped out over $13,000 worth of products.

Dote is another mobile shopping app that pushes products through video content. The San Francisco-based company curates products from retailers like Sephora, Victoria’s Secret and Urban Outfitters in what founder and chief executive Lauren Farleigh describes as a virtual mall. “We know that users don’t want to download 20 different apps for all the places they want to shop,” she said. But unlike Eight, its users are all buyers not sellers. Dote hosts a daily live show at 5pm Pacific Time presenting an Outfit of The Day (OOTD) on both its app and on Instagram Stories along with a link to shop the individual items. Farleigh believes that Dote will appeal to young women between the ages of 15 and 35. Investors like Lightspeed Venture Partners, which also backs Bonobos, Goop and Girlboss, are buying into this vision, having led a $7.2 million round in the company last July. 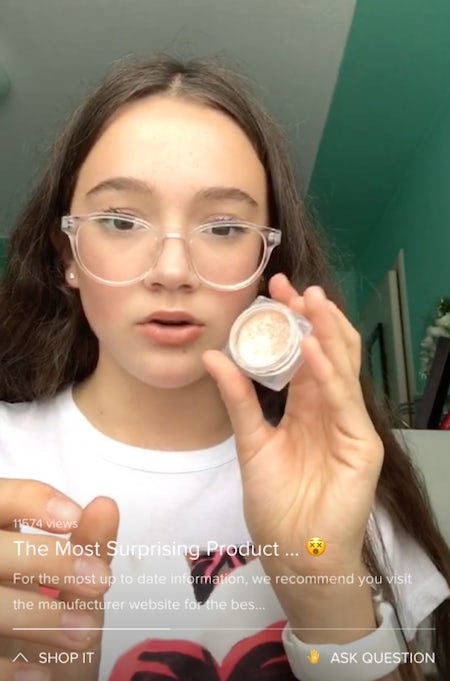 But the power of video live streaming transcends beyond the millennial and Gen-Z demographic: 52 percent of adults used online videos to research their most recent purchase, and 64 percent of customers are more likely to buy a product online after watching a video about it, according to data from Forrester. Tech giant Cisco’s annual visual network index (VNI) estimates that video will claim 82 percent of global internet traffic by 2021, with live video expected to grow 15-fold, from 3 percent of internet video traffic to 13 percent by 2021. Video consumption on mobile, in particular, has been growing 100 percent every year.

While global live broadcast and events will generate $545 billion in direct revenue in 2018, according to Deloitte, the majority is still generated by traditional formats, although new genres like live streaming is picking up. The consulting firm estimates that live streaming revenue will reach $7.4 billion in 2018, a 47 percent increase over the previous year.

Corona-based LuLaRoe, which has been selling women’s clothing along with some men’s and children’s since 2013, has proven to be one of the fastest growing apparel brands in the US, hitting $2.3 billion in annual revenue in four years. The brand doesn’t have any physical stores and doesn’t sell direct-to-consumers on its website; instead, sales take place through pop-up events (35 percent) and Facebook Live (65 percent), hosted by its network of over 80,000 representatives. “LuLaRoe's explosive growth has been the result of a unique sales model that blends social selling and live video with the age-old tradition of in-home pop-up boutiques,” said Shana Frahm, LuLaRoe’s executive director of marketing and media.

LuLaRoe currently makes no more than 5,000 items of any one design. Representatives — which the company refers to as Independent Fashion Retailers (IFR) — purchase clothing at 50 percent of the suggested retail price and sell them to their personal networks, pocketing the difference. “Companies like LuLaRoe work so well because they have a sense of community at their core. It’s not a generic e-commerce site,” said Oliver Luckett, who joined the firm as chief social retail architect in September 2017. “People want to be connected with each other [yet there’s] an emptiness when you order on Amazon or Farfetch. It’s the social element that drives us to the store and I think it’s such a vital aspect for fashion. Just as much community is being formed as product is being sold.”

IFRs’ Facebook Live sessions resemble a virtual Avon party that can host hundreds. “Having 700 people in our home is not realistic, but this tool breaks down all barriers," said Lindsey Wheeler, an IFR. At 10am, a single IFR had about 15 users tuning into watch her live video session where she presented her latest selection of clothes. “How hard is it to get 15 people in a retail store simultaneously on a Monday morning? There aren’t 15 people in a mall shopping at this time on a Monday in America,” said Luckett. But LuLaRoe has few customers in key fashion cities like New York and Los Angeles and have instead tapped into other areas in the US that were previously underserved.

While the live streaming industry has become a viable source of income for many thousands across the globe, YouTube and Facebook haven’t made e-commerce easy. Both platforms still haven’t developed the tools for its users to streamline the commerce process. During a live video feed, IFRs hold up a number for each of their items, filling in orders that trickle in via comments during the broadcast (users write the number in the comments section to claim the item.) Transactions take place outside of YouTube and Facebook, which means that shoppers are redirected to all kinds of personal websites, PayPal systems and Shopify pages.

“Honestly, this is shocking to me. I have no idea why social platforms in the West have not made more progress with integrated payments and e-commerce functionality. The same can be said for Amazon and eBay, which haven’t made larger strides in integrating video content or live streaming. Content-to-commerce makes so much sense and is a well-vetted proven model in China,” said Elijah Whaley, chief marketing officer of Parklu, a company that manages and promotes Chinese live streamers.

But change may be afoot. Amazon is said to be in talks with Evine, a TV shopping channel, about a possible takeover. Although Amazon has declined to comment on the potential acquisition, Evine would give the technology giant access to 87 million homes via its channel, website and app. Elsewhere across the world, influencer live streams are also becoming a bigger brand opportunity. According to Deloitte, live streaming will drive $4.4 billion in direct revenue in China this year, an increase of 37 percent over 2017, and reach 456 million viewers. Today, there are hundreds of live streaming platforms in China, including Yizhibo, Meipai, Huajiao Live, Kuaishou and Inke, as well as Alibaba’s Tmall and Taobao.

The most important thing is that it doesn’t feel like an advert.

“A good portion of China’s live streaming is now focused on commerce. All the major platforms in China have integrated live streaming for sellers [and] throughout 2017, we saw live streaming at pretty much every major brand event,” said Whaley. At its last Singles Day, China’s biggest sales event, e-commerce giant Alibaba broadcast a live ‘see-now, buy-now’ fashion show where consumers could instantly purchase clothes from over 80 brands, including Adidas, Burberry and Gap on its Tmall platform. The event netted Alibaba a record $25 billion in sales, up from $17.7 billion the year prior.

Unlike existing Western platforms, many of China’s video live streaming apps already integrate chat, search and e-commerce all inside one walled garden, offering a seamless path to purchase, where the shopper never needs to leave the comfort or convenience of the app. These super-platforms make it easy for bloggers, video makers and live streamers to turn content into a business, birthing a group of internet celebrities known as “wang hong,” many of whom have opened their own stores on Taobao.

As one of the fastest growing and most in-demand forms of marketing, live video can be a key driver of purchases for brands. It has been especially effective in China where there is general public anxiety over the quality of products, given the prevalence of knock-offs, poorly made items and fake reviews. Through a video live stream, consumers can see what products actually look like, rather than generic or poor images posted online. Live streaming also gives the seller the opportunity to introduce the product’s features and demonstrate how to use or style it. At the same time, viewers can directly ask any questions or voice concerns about the product. Live streaming provides the trust and transparency that e-commerce has traditionally lacked.

As consumers demand greater transparency and value authenticity, many are turning to video live streaming because “it just feels like [they're] learning about something from a person. Consumers in the West may not be as used to this yet as consumers in China. The first introduction they had of this was through vloggers on YouTube, so this is like the second wave of that,” said Knight. “The most important thing is that it doesn’t feel like an advert. I don’t think people would be as interested in the content if it didn’t feel like genuine opinion and advice.”