So far, virtual changing rooms have been more of a toy than a true commercial tool. Urban Research could change that. JapanConsuming reports.

TOKYO, Japan — Although Japan’s first virtual changing room opened in Tokyu Plaza in Omotesando two years ago, the technology has been little more than a gimmick — until now. Last month, Urban Research, a fast-growing and popular fashion, home and lifestyle retailer, launched an experiment in Tokyo’s Parco Ikebukuro that leverages enhanced virtual changing room technology to power a micro pop-up store. Called 'Wearable Clothing by Urban Research,' the store is just seven square metres and carries no stock. Instead, it allows customers to simply stand in front of one of two 60-inch screens, select clothing items they want to try on and see themselves dressed in the products within seconds. Customers’ movements are represented fluidly on the screen in 3D and customers can use an integrated iPad to take pictures of themselves and share them with friends on social networks.

Virtual changing rooms like these have several advantages for retailers, not least because they allow companies to sell product without the burden of managing inventory, directly from their existing e-commerce back ends. In the Wearable Clothing pop-up, to purchase an item, customers need only scan a QR code and click 'buy.' Virtual changing is also relatively effortless for customers, saving time and lowering resistance to trying on clothes — especially among men. Customers can also physically try on one item, then whizz through a collection of matching items, which could encourage greater spending. 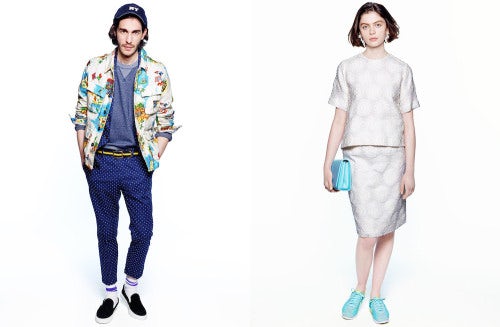 If the service catches on, it could also enable retailers to open networks of tiny stores in high traffic locations, like train stations or even airports, each carrying little to no stock. Some may even be completely unstaffed, similar to photo booths.

For now, the service is still in trial stage and Urban Research pop-up store was only open until the end of June. But a future test store with six screens is being planned and the system is also set to be installed in Urban Research’s flagship stores in busy shopping centres like Lazona and Lucua. These shop-in-shops will sell product from brands and suppliers selected by buyers, but which did not make the cut due to space constraints in stores. Similar micro-shops are also planned for department stores and stations, including in Shanghai.

So far, shopping centre developers seem enamoured by the idea. Urban Research’s initial tests suggest potential for very high sales density — the key metric for retail performance, typically measured in sales per square foot — given the small footprint of such stores and the speed at which they allow consumers to try on clothes. There is even talk of tying up with sponsors from other categories, like cars or tourism. Virtual changing booths could be configured to look like the inside of a new model car, for example, or could use a backdrop of the Eiffel Tower and entice consumers with links to view holiday promotions in Paris.

Developers also see such stores as a great way to capture online sales within their shopping centres, especially if these virtual changing rooms were managed by malls themselves for multiple brands. Although online apparel sales are booming, the desire to ‘try before you buy’ remains a major barrier for consumers. By stopping by a changing booth at a local shopping centre or train station, customers may not be able to gauge the subtleties of exact fit, but they may be able to quickly determine if a particular outfit suits them or not.

Urban Research is one of Japan’s market leaders in online apparel sales measured as a ratio of turnover; last year, 20 percent of its ¥36 billon (about $350 million) in sales came from online sources and the company is actively looking for more ways to merge physical spaces with digital sales, particularly through technologies like virtual changing booths that can also offer an layer of entertainment for shoppers.

JapanConsuming is a leading provider of intelligence on Japanese retail and consumer markets.