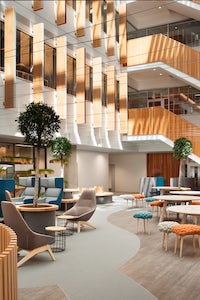 The Yoox Net-a-Porter Group has unveiled plans for its new London tech hub.

The luxury e-commerce company revealed Tuesday that it will invest more than €500 million ($567 million) in technology and logistics to double the size of the business by 2020 and open a new 70,000 square foot “tech hub” office in west London. The space, designed by architect Nicholas Grimshaw at White City Place, will house the entire UK tech team — 500 people currently, with plans to hire 100 more over the next two years — and focus on developing artificial intelligence and personalisation capabilities.

“This is the first example of the luxury industry making such a big investment in tech. We have 1,000 engineers in London and Bologna. That’s something that no luxury brand in the world can have. We are the perfect merger of luxury and tech, that’s why we are serving the brands so well,” YNAP chief executive Federico Marchetti told the Guardian.

The group, established in a 2012 joint venture, saw a combined net revenue of €1.9 billion ($2.16 billion) in 2016. Half of its sales come through mobile, and Marchetti has been vocal about his goals to transform the company into a mobile-only retailer.

The tech hub isn’t the only new investment YNAP announced Tuesday: the company has partnered with the Imperial College London to introduce children, especially young girls, to computer science and coding by offering free weekly classes at the new tech hub. Over 700 children will learn JavaScript via curriculum designed by YNAP developers. — Chantal Fernandez

The editor-in-chief of Yahoo Style has announced his departure from the fashion vertical he launched with much fanfare in 2014.

“I am so proud of the site we built from the ground up but of course, no one does anything alone,” wrote Zee in a Facebook post on Tuesday. “Thank you to all my amazing cover subjects, editors, writers, photographers, stylists, bloggers, designers, videographers, producers, assistants and just overall cool people who contributed to our project from day one… Not closing a chapter, just closing a tab. Keep reading you guys and see you all soon.”

Zee, who established his career at W, Allure and Elle before going digital, has become a household name through his television appearances on “FABLife,” “The City,” and many other programmes. He transitioned to a more video-focused role at Yahoo last year, when he picked up a weekly segment on Entertainment Tonight, after which editor Laura Kenney took the lead at Yahoo Style. (She now also leads Yahoo Beauty, whose editor-in-chief Bobbi Brown departed in February 2016.)

Zee’s departure comes during a moment of massive change at Yahoo. Now that Verizon has closed its acquisition of the internet company, which it first announced it would buy for $4.48 billion last July, an estimated 2,100 people are set to lose their jobs. Verizon will merge Yahoo with AOL, which it acquired in 2015 for $4.4 billion, into a new company called Oath. The aforementioned layoffs will represent 15 percent of the Yahoo and AOL’s combined workforce.

Oath will be led by AOL chief executive Tim Armstrong, and operate as an umbrella of media brands including Yahoo Style and Yahoo Beauty, which will continue to operate with its own editorial staff.

A representative for Yahoo confirmed that Zee is leaving, but did not comment about any layoffs at the vertical at this time. — Chantal Fernandez