NEW YORK, United States — In the late aughts, when Michelle Goad was a wholesale merchandiser for Marc Jacobs, she spent a significant amount of time visiting malls the world over. “I’ve been to every food court,” she jokes. Goad witnessed, first-hand, the precipitous decline of retail foot traffic that followed the global financial crisis of 2008, as well as the sluggish recovery made worse by the rise of e-commerce.

But Goad also noticed that, in order to help buoy numbers, sales associates were using personal phones to reach out to clients, an observation that, ultimately, led to PS Dept., the online personal shopping service she founded in 2011. “I made a big bet that people want service, which you really can’t get through most e-commerce,” she says. “You’re not going to ask a customer service person about the cool jean.”

PS Dept.’s first iteration was a simple messaging app, which connected in-store sales associates with customers looking for specific products. Today, Goad, who is also the company’s chief executive, employs a team which constantly scouts products for customers from more than 10,000 sales associates at over 100 retail partners, from Net-a-Porter and Chloé, to multi-brand boutiques like The Webster and Hirshleifers (brick-and-mortar stores drive 70 percent of transactions). PS Dept.’s “concierge” team pings out specific product requests to store sales associates using a system that’s similar to the way Uber contacts drivers when a customer orders a car, while the company’s team of 10 in-house “stylists” answer trickier or more open-ended customer requests.

I believed that consumers had a sense of pride in where they shopped. The number one thing we’ve found is that she does not care where the product comes from, just as long as she’s getting it and getting it quickly.

PS Dept. makes a commission on each sale at a rate that varies from retailer to retailer. And, critically, Goad’s stylists are salaried, which means it’s not against their interests to find clients the best price. “We think like the customer,” says Goad. “If we let you know something is marked down, you’re going to be loyal forever.”

So far, the approach appears to be working. PS Dept. handles an average of 5,600 shopping requests a month, up from 2,100 at the end of 2014. The average order value is about $800, while the company’s customer retention rate is 68 percent over an 18-month period. To date, the company has spent zero dollars on customer acquisition. 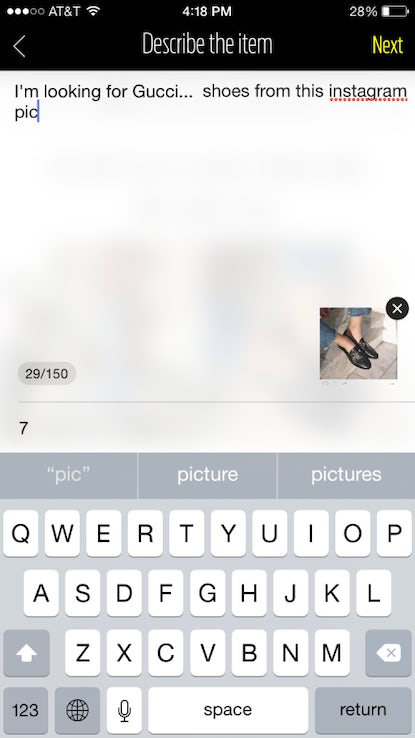 The rise of personal shopping apps like PS Dept. has received a boost from shifting shopping habits. In today’s item-driven era, fashion consumers have become much less loyal to specific brands and retailers, and more obsessed by particular pieces, such as a Gucci loafer or a fur-lined coat from Mr & Mrs Italy. (Two products that have been big hits for PS Dept.) “When we first started the business, I believed that consumers had a sense of pride in where they shopped. The number one thing we’ve found is that she does not care where the product comes from, just as long as she’s getting it and getting it quickly,” says Goad.

“It’s amazing how influenced this client is by online media,” she continues. “If a product is released on Instagram, the client might ask for it before it’s even available. That’s where we come in. She’ll submit it to her shopper and pre-order it immediately. The time to conversion is so fast, it’s potentially millions of dollars left on the table if the brand can’t react.”

Goad’s approach has resonated with investors like textile mogul Silas Chou and Uber co-founder Garrett Camp, who have helped her raise a total of $5 million in funding. “One of the big aims or pillars of our investment thesis is that great customer service is one of the most compelling places to compete from,” says Kirsten Green, founder of Forerunner Ventures, a San Francisco-based early-stage venture capital firm that has invested in PS Dept. “It’s something that is increasingly important for consumers. Product is paramount, but in some ways it just gets you in the game. We’re really high on the idea of partnering with entrepreneurs who are focused on delivering superior customer service.”

Of course, PS Dept. is not the only start-up offering personal shopping services. Thread, a London-based startup that focuses on mid-priced men’s fashion, says that 250,000 men use its service, with an average shopping cart of £150 (or about $213). The company’s influential list of investors includes Edgar Bronfman Jr., former owner of Warner Music, Guy Hipwell, former head of online at Harrods and Liberty and Shakil Khan, a founding investor in Spotify.

“It wasn’t super scalable in the beginning,” says Thread’s chief executive and co-founder Kieran O'Neill, a serial entrepreneur who first launched the service in 2012 through startup accelerator Y Combinator, noting that the “stylist” to customer ratio was one to 100 in the early days of the service. Four years later, after further developing its proprietary recommendation technology, the company has brought that ratio to one to 40,000. O’Neill hopes to drive that number up to 100,000 by constantly gathering data points and thus refining the algorithm used to recommend products. “The vision hasn’t changed, but the way we execute has gotten a lot more sophisticated,” he continues. “One of the big things with this market is that a lot of people drop the word algorithm, and it means very different things,” O’Neill says. “It’s super easy to have an algorithm, but to have one that’s powerful in the way Google’s algorithm is powerful is very, very hard.”

Abigail Holtz, a former Google product manager who worked on the tech behemoth’s failed Boutiques.com venture, is confident that her Bay Area start-up Affinity, which has developed a fashion recommendation tool geared towards women, has an algorithm to beat. Like Thread, users who sign up for Affinity — launched in beta in January 2016 —are asked to fill out a style quiz, which consists mostly of rating different outfits to gauge personal preferences. Affinity then emails the user once a week with personalised recommendations, culling from “hundreds” of online stores. Also like Thread, Holtz has hired “stylists” to add a human touch to the equation. Each week, the user can rate Affinity’s recommendations so that the service can further refine its offerings. “I like email because it is a proven and very successful marketing channel. After looking at the landscape of failed tech apps, we decided to build Affinity as email-first because it allowed us to tie into existing shopper habits,” Holtz says. “And since we don't have to worry about getting customers to download and open our app every day, we can focus on our core product promise, specifically delivering really great recommendations.”

While most of these services rely, at least partially, on algorithms to make their recommendations more scalable, the Charlotte, North Carolina-based House Account aims to directly connect consumers with in-store sales associates, cutting out the middleman. The app, which launched in January 2013, serves as a way for independent retailers to keep in touch with their best clients without resorting to text messaging, which can feel intrusive. “The idea came about during the recession when I was having trouble bringing business into my store: I had to reach my customers another way,” explains the app’s co-founder, Laura Vinroot Poole, who also owns the upscale fashion store Capitol in Charlotte.

“House Account easily brought my business online, and gave other independent retailers the opportunity to do so,” she continues. “What started out as a simple marketplace has evolved into a sophisticated set of digital sales and marketing tools specifically formulated for brick-and-mortar businesses.” Not only can sales associates communicate directly with their clients, but clients can also make in-app purchases and explore the 450 participating boutiques across 28 states. (There are currently approximately 55,000 House Account users.)

While most tech-powered personal shopping services earn revenue through some sort of commission, either negotiated directly through retailers or via their affiliate marketing programmes, House Account charges participating retailers a $100 monthly subscription fee. “As a shop owner, I know that you have to work long and hard to develop vendor relationships and build up business, so we don’t ask for a percentage of sales,” says Vinroot Poole. “You can easily and cheaply get your shop and inventory online, provide personalised service to customers from anywhere at any time via mobile messaging, create and send branded email campaigns that stand out in your customers’ inboxes, put your shop marketing on autopilot with our marketing calendar, and learn more about your customers and their needs individually and as a group with our customer profiles.”

Highly successful white-glove services have cropped up in plenty of verticals from transport (Uber) to food delivery (Seamless). But how big can the market for personal styling businesses become? “I think the bigger thing to figure is the number of people who are reaching out for some input when they search and don’t ultimately find [fashion products],” says Green. “Conceptually, that’s the biggest thing to focus on as opposed to the [current] dollar transaction — that the customer is going to come back.”