Poshmark chief executive Manish Chandra says the company will use the funds to expand and enter new countries, starting with additional English-speaking regions and then moving into Western Europe and Asia. (Currently, Poshmark is only accessible in the US.) 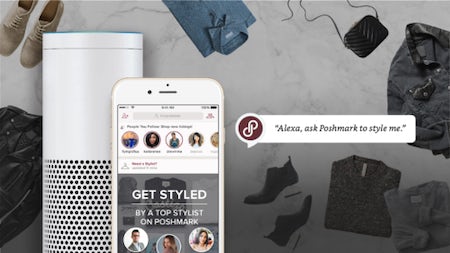 Here’s how it works: a Poshmark user with an Amazon device — such as an Echo or Dot — can make a verbal request along the lines of, “Hey Alexa, style me for a date-night look on Poshmark.” The request is then routed to a handful of Poshmark sellers — referred to within the app as “stylists” — who will drop shoppable outfit suggestions into the customer’s Poshmark account. These recommendations are based on customer data (size, style and other “people-matching algorithms”) and the aesthetic of the stylist. In early testing of the Poshmark Stylist Match, conversions were “off the charts,” Chandra says, with five-to-10 times more engagement than a typical interaction.

The upgrade comes at a time when the concept of data-based personalisation is making waves in e-commerce. Recently, algorithm-powered personal styling service Stitch Fix revealed that it generated almost $1 billion in revenue in its latest fiscal year. In April, Amazon introduced its personal styling-specific “Look” device, which boasts a hands-free camera, dolling out fashion recommendations based on algorithms and human feedback.

Chandra says Poshmark differs in that customers are presented with suggestions from multiple stylists. He compares it to going into a mall and being styled by six different boutiques. “The diversity is one of the best things,” he says, adding that the feature offers a new way for customers to discover new stylists.

Chat-based technology, too, was a “natural evolution” for Poshmark. Chandra hints that, eventually, a stylist could have a direct conversation with a customer using Alexa or a device such as Google Home. “We continue to believe that shopping should be personal, and not just ‘personalised,’” he says.