NEW YORK, United States — “Is it useful? Does it solve problems? And would you still wear it if the battery died? That’s the way I look at wearables now.” Christina Mercando, CEO and co-founder of Ringly, a start-up that makes women’s rings with embedded digital technology, is perched on a sofa at the company’s temporary offices, a large shared loft space on the top floor of a building just north of Madison Square Park.

Ringly sells 18-karat gold-plated rings with precious and semi-precious gemstones that not only serve an aesthetic purpose, but discreetly transmit notifications from a variety of smartphone apps — from email to Uber — through vibration and a subtle light. “It began with me being frustrated because my phone was in my purse and I was missing things all the time,” Mercando explained.

In a hyper-connected world, Ringly is about less noise, not more. Indeed, the product allows wearers to keep their phones hidden away in the their bags and control which notifications get through. “I saw it as a personal assistant to ping me when things were important, like when my car was arriving, or when my next meeting was coming up, or when an important person was trying to reach me,” she continued. “You can remove the anxiety of having thoughts like: What if my babysitter is trying to reach me because my kid is hurt? I can be out to dinner and just feel better knowing what's going on. It's actually a different way of disconnecting. You're disconnected but connected at the same time.”

This January, Ringly raised a $5.1 million Series A round led by Andreessen Horowitz, with participation from High Line Venture Partners and Silas Capital, as well as previous investors, including First Round Capital and PCH, bringing the total amount the company has raised to date to $6.1 million. Ringly’s valuation in this latest round was not disclosed, but market sources put the number at around $40 million.

“Ringly made amazing progress on a small seed investment. In addition to designing a beautiful product, Christina has assembled an incredible team of experts in electrical engineering, embedded systems and machine learning out of places like MIT and Stanford. In a little over a year, they’ve designed, manufactured and shipped their first product, which is getting rave reviews,” said Chris Dixon, a general partner at Andreessen Horowitz.

But Ringly’s plans go far beyond rings and notifications. Longer-term, the company aims to produce accessories that allow people to more seamlessly interact with the world around them, replacing things like keys, wallets and metro cards. “You could potentially use it to open the door, get into the subway, get into your car,” said Mercando. “We're sticking to fingers and wrists right now, because they are in your line of sight, so you can both see them and feel them. Secondly, with fingers and wrists you're able to interact with your environment more.”

Ringly’s launch product also has an accelerometer, which means, in the future, the company’s accessories could recognise hand, wrist and arm movements, enabling wearers to interact with a wide range of smart objects, appliances and environments with simple gestures. “We're working on new sensors,” revealed Mercando, adding that Ringly plans to launch new hardware products in 2016.

But building a company that successfully marries technology hardware and fashion is no easy feat. “I've always worked closely with designers and technologists or engineers. It's just been part of my DNA to bring those two worlds together. I think just knowing how to work with and talk to both sides is really helpful, because it does have to be a marriage. It can't just be an afterthought,” said Mercando, who graduated from Carnegie Mellon with degrees in both fine art and human computer interaction and worked in the music industry before becoming a product manager and later joining Hunch, a personalised recommendations service co-founded by Dixon and acquired by EBay in 2011.

Recruiting the right mix of talent is also critical. “The tricky thing about a company like this is that you need a lot of expertise in a lot of different areas. You need an industrial designer, you need a mechanical engineer, an electrical engineer, manufacturing engineers, mobile engineers... Right now, we have a lot of engineers.” Out of Ringly’s ten full-time employees, eight are engineers. The other two work in jewellery design and marketing, respectively, with Mercando acting as head of product as well as CEO.

“I've worked with a lot of engineers and I've learnt to find the ones who are creative, who really, really care about product the way that designers do. Also, on the design side, our jewellery designer is completely fascinated by the technology side. We look for people who have the ability and curiosity to want to learn new things,” said Mercando.

But perhaps the most challenging thing about building a company at the intersection of fashion and hardware is manufacturing. “Manufacturing products like this is really hard. It's a new space,” admitted Mercando.

Ringly got a boost from PCH (named after California’s Pacific Coast Highway), the company founded by Irish entrepreneur and supply chain guru Liam Casey, which counts Apple and Beats by Dre as clients and operates a San Francisco- based, four-month accelerator programme for hardware entrepreneurs like Ringly. “We were in San Francisco for four months working on the prototype,” said Mercando. “The founder is very entrepreneurial himself, so he is taking in entrepreneurs in hopes of mass producing, which is a very hard thing to do, especially at the volumes we're at right now, so that was an interesting partnership at the very beginning.” 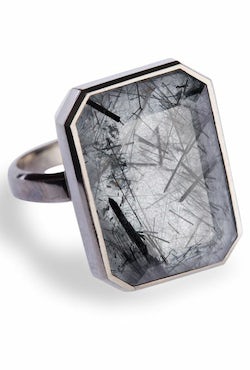 One of the fundamental challenges of making wearable technology is reconciling the way traditional, one-size-fits-all electronics devices are developed with the dizzying speed and variation of the fashion market, where consumers demand a constant stream of new products that fit their specific lifestyles and give them a wide enough range of aesthetic choices to simultaneously assert their individuality and signal their belonging.

“Part of the strategy, this year, is taking this interesting technology and coming out with a lot of different designs,” said Mercando, who plans to tap collaborations with a range of third-party brands and designers. “I see the future of wearables as less one-size-fits-all. That's not how clothing works. If you look at shoes, you have different shoes; you have rain boots, you have sneakers... In fashion, people also get tired and want new things, so it's important that we can keep up with that pace. We're trying to create a world where electronics are built in the same way and in the same cycles that fashion is released and built. That's definitely been a challenge and something we're working towards.”

On the one hand, this means creating the technology guts of Ringly’s products in a way that can work with a wide variety of possible form factors. “Since the beginning, our focus has been miniaturisation. It's getting the tech as small and tiny as possible, so you can really work with other designers and brands and give them control and not have them create with restrictions. We have what we call our ‘burrito,’ which is the tech that fits inside,” said Mercando.

“We're also working with designers to create designs for which we will then build new technology to fit that shape or style,” she added. “We always want to start with the design first. That's difficult because that’s an entirely new R&D cycle and could take five to six months to get the hardware components into production. So if we do a new design we're either going to sell a lot of it or we're going to have to re-use the tech inside for other designs and styles.”

Part of the solution is a continuing partnership with PCH. “I spent 10 years working in the fashion industry, many years ago, before I started this company,” said Casey. “At the last minute you could make a decision to change what the garment was, which creates a huge amount of flexibility for innovation and creativity. When I entered into the tech world, I just couldn't understand that I was dealing with stuff like three- year product roadmaps,” he continued.

PCH, which has offices in Cork, Shenzen, San Francisco, Hong Kong, Seoul and Tokyo, “is three hours from all the factories we work with and can get products within three days to 90 percent of consumers. So, when somebody orders something, we can take a vanilla product and flavour it to the consumer's requirements. This could be through engraving, colour, printing. It allows for variety. Last year, our sales were over a billion dollars and we ship product all over the world. Every product we ship can be an order of one.”

The wearables market is expected to get a boost from Apple’s much-anticipated smartwatch, set to hit stores in April. “The Apple Watch is going to be a game changer in terms of the space,” said Mercando. “It's going to open it up for all of us and help make people more comfortable with the concept of wearables. That said, when you look at the Apple Watch, you get to wear a screen on your wrist and that doesn't strike me as something that everyone will want to wear everyday,” she cautioned. “We're staying away from screen-based devices.”

Ringly declined to disclose current revenue figures, but said the first 1,000 rings in the company’s launch collection sold out on Ringly.com within 24 hours of becoming available for pre-sale last June. The product is now being distributed on Shopbop and Bloomingdales.com, as well as via Ringly's own website, where a pink sapphire model, dubbed Wine Bar, has sold out, but four other models — Stargaze (onyx), Daydream (rainbow moonstone), Into The Woods (emerald) and Dive Bar (tourmalated quartz) — are available for between $195 and $260.

“We did a lot of analysis on wearable tech pricing and accessible luxury jewellery pricing to come up with our costs and materials. I wanted the product to be accessible, so that many people could purchase and experience it, but also really good quality. I didn't want it to feel gimmicky or cheap,” said Mercando.

But what does Ringly mean as a fashion brand?

“We are playful and simple,” said Mercando. “I think what fashion means is changing, especially amongst younger generations. A lot of them are buying electronics when they used to spend on clothing. Showing off the new iPhone will make them more popular than, say, buying the latest fashion trend. Ringly is the fashion brand of the future. It’s about blending style and function in more meaningful ways than we see today.”

Large fashion players are missing the opportunity because they lack the fundamental technology expertise, said Mercando. “The same way that a lot of technology companies didn't start with the fashion side, it's just about what you know. And there's also investment to be considered. You have to be dedicated.”