BoF has learned that social commerce site The Fancy has raised an additional $7 million from a group of investors including Richard C Perry, owner of Barneys New York, and his son David Perry, who works at The Fancy.

LONDON, United Kingdom — The Business of Fashion has learned that social commerce start-up The Fancy has raised another $7 million in funding from investors including hedge-fund manager Richard C Perry, who owns a controlling stake in Barneys New York, according to a source familiar with the transaction. The most recent injection of capital was disclosed in a regulatory filing last week that did not name the investors. 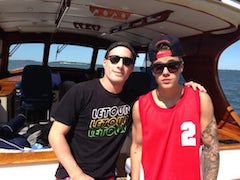 Perry's son David, who works at The Fancy, recently appeared in an image on the company's Twitter account with Justin Bieber, along with the text: "Good times with David Perry, Fancy Head of Strategy and Investor & friend."

The Fancy's founder Joseph Einhorn declined to comment on the specifics of the company's fund raising activities, but confirmed that Mr Perry and his son are investors in the company.

This brings the total amount of capital raised in the company's latest round of funding to $60 million, following reports, two months ago, that The Fancy raised $53 million from investors including American Express, billionaire Len Blavatnik and actor Will Smith, at a valuation of $600 million. Previously, The Fancy has also raised money from Kering chairman and chief executive François-Henri Pinault, another business magnate with ties to the fashion industry.

The latest news comes only days after Richard Perry expanded his investments in the retail sector, raising his ownership stake in ailing department store chain JC Penney to 8.6 percent.

An online store where users hand-curate the product selection, The Fancy has a run rate of approximately $36 million in annual sales, according to figures supplied by the company in June of this year.