The Year Ahead: How to Get Ready for a Digital Recalibration

Valuations of digital fashion players have reached dizzying levels and, despite a slew of high-profile IPOs and private firms achieving unicorn status, investor sentiment is taking a turn for the worse.

LONDON, United Kingdom — Digital continues to be a major focus of the fashion industry. Brands are rightly obsessed by how to make digital pay, not just in respect of the customer interface, but across the organisation. Investors too have been pushing this shift — mentions of “digital” in leading brand earnings calls have risen 130 percent over the past four years. Against this background pure fashion-tech players have made hay, raising almost half the $3.7 billion total from initial public offerings (IPOs) in fashion in 2018 to 2019, despite accounting for just 17 percent by number.

Appetite for digital has pushed fashion-tech valuations to stratospheric levels in the public and private markets. Pure online players often trade at an average enterprise value (EV)/sales ratio of above 2x, compared with 0.8x for the wider fashion sector.

Indeed, fashion-tech players are attracting a significant proportion of private equity (PE) and venture capital (VC) investment. While PE and VC investment in fashion peaked at nearly $23 billion in 2017, the proportion of this investment going to fashion-tech players — from e-commerce platforms to direct-to-consumer (DTC) brands — reached highs of 57 percent this year, a marked increase from 28 percent just two years ago.

There is growing excitement around the fashion-tech unicorn (privately-held companies valued at more than $1 billion) phenomenon, as StockX and Rent the Runway this year joined last year’s unicorns About You and Allbirds. Several DTC start-ups — including luggage company Away and beauty brands Glossier and Pat McGrath — reached billion-dollar valuations in their latest rounds of fundraising. Meanwhile, there has been an additional group of brands valued upwards of half a billion dollars, including resale marketplace ThredUp, sneaker retailer Goat, luxury fashion discovery platform Moda Operandi and online lingerie brand ThirdLove.

Only 24 percent of companies are expected to report positive net income in their first year on the market.

With fashion-tech companies trading more in line with the technology segment than the fashion segment, and with equity markets still hovering near record highs, there is a reasonable basis for investors to take stock. The tech-dominated Nasdaq has climbed steadily for a decade but dipped in late 2018 and in 2019 and has traded flat, after recovering to beat its earlier highs. As IPOs continue apace, performance expectations are softening. In this year’s class, only 24 percent of companies are expected to report positive net income in their first year on the market, making them the least profitable IPO class of any year since the peak of the tech boom in 1999, according to Goldman Sachs.

“Numerous companies have come public this year and not traded well… this typically marks the end of speculative behaviour,” says Mike Wilson, chief investment officer and chief US equity strategist at Morgan Stanley. “This change in investor behaviour may also mark the end of the frenzy for unicorn private companies that have great growth potential but are currently unprofitable and burn a large amount of cash every year, requiring ongoing financing.” 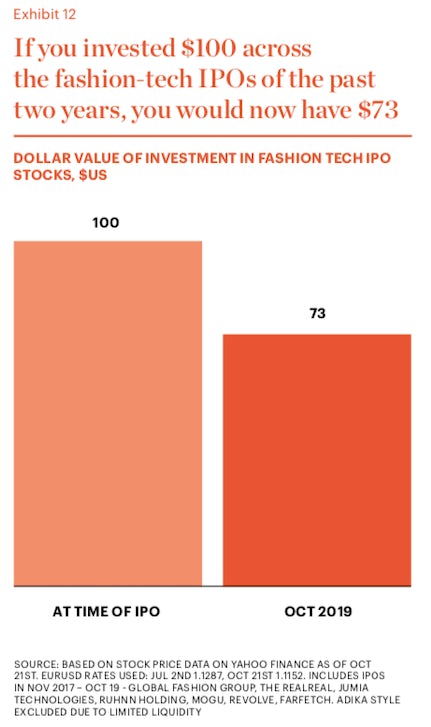 Indeed, post-IPO, investors have often ended up disappointed. The Renaissance IPO Index gives investors exposure to companies that have been public in the US for two years or less, with tech players accounting for roughly half of the companies included. The index has faltered since August, having recovered from its large dip at the end of 2018. No wonder there are concerns that the market in some ways feels reminiscent of the lead-up to the dot-com boom of the early 2000s.

The affliction seen in the wider tech sector is also reflected in fashion, where many of the most recent class of IPOs have not traded well in secondary markets. An investor who invested $100 in fashion-tech IPOs over the past two years would now have $73 remaining.

It’s not just public companies that have struggled recently. Beyond the high-profile WeWork saga, online fashion resale marketplace Poshmark in September delayed plans for an IPO until next year to “focus on boosting sales and improving its execution.” The company, whose investors include Menlo Ventures and Temasek, brings to light market caution as fashion-tech investors weigh up their exit strategies.

Some of the world’s biggest companies that invested in fashion-tech players are showing signs of reviewing their digital strategies, at the expense of these pure play brands. Walmart in June announced plans to divest or restructure a number of e-commerce businesses, including Jet.com, an online start-up it acquired in 2016 for $3.3 billion. In October Walmart sold women’s apparel player ModCloth to an investor group for an undisclosed price. It has also been cutting staff at digitally native menswear brand Bonobos.

Experience from the past offers sobering lessons from investor exuberance in fashion-tech players, as several have fallen from dizzying heights. After raising $40 million of funding in 2012, Nasty Gal filed for bankruptcy protection in 2016 and was sold to Boohoo for just $40 million the following year, spurred in part by heavy investment in logistics and expensive customer acquisition. Gilt Groupe deviated from its core as it moved beyond apparel to travel sales and food, and expanded into Asia at the height of its popularity, while industry critiques also point to the slower uptake in flash-sales by consumers as was expected by investors. It was acquired by Hudson’s Bay Company for $250 million in 2016 — a fraction of its $1 billion valuation in 2011 — and since has been bought by competitor Rue La La, which just four years prior Gilt Groupe was said to be eyeing up as an acquisition.

An important performance differentiator will be data and analytics that can make life easier for customers and suppliers.

Nobody has a crystal ball when it comes to financial markets, but the story of 2019 has been that not all high-profile companies embracing e-commerce are guaranteed to prove a clear path to profitability. The same can be said for fashion-tech companies. As a result, we expect in 2020 that the fever around these companies will abate, both in public and private markets, as investors look for signs of real profitability potential, over just sales growth, before jumping in. We expect investors to develop a sharper appreciation of which companies are creating value and which are destroying it, and a more sober attitude to IPOs, leaving private equity companies to think more carefully about alternative exit opportunities for potential unicorns before jumping in — after all, how many buyers are there for a company worth more than a billion dollars?

In response, digital fashion players need to evaluate their business models and look for levers to boost revenues profitably and ensure they are clear about which elements of their business model will drive profit. For larger players, as highlighted in last year’s report in “Digital Landgrab,” companies that diversify their ecosystems to related and overlapping businesses will strengthen their leads over pure players who rely solely on retail margins and existing offerings. An important performance differentiator will be data and analytics that can make life easier for customers and suppliers, and may be the key to outperformance in the longer term.