NEW YORK, United States — Upstart fashion website VFiles will stage a “user-generated” fashion show at New York Fashion Week, featuring the work of three young designers sourced directly from their online community: Ammerman Schlösberg, Maria ke Fisherman and Sam Mc. Production, casting, styling, hair and makeup for the show, to be held on September 4th, will be provided by VFiles, while select pieces by the three designers will be sold after the show at the VFiles store in New York’s Soho and on the VFiles website.

“There is such a huge gap between the established designers and the young designers who are starting to attract big audiences and traction in the Internet community — and we wanted to give these younger newer designers a voice in a traditional context,” Julie Anne Quay, founder of VFiles, told BoF.

VFiles, which currently clocks about 1.4 million page views per month, is a "platform for fashion entertainment" that's part publisher, part social media site, offering a blend of original content created by professional editors and content that's created and curated by members of the VFiles community.

"It's a media company built by users, for users," said Quay. Importantly, it’s also one of the few media entities to successfully unite the remixed aesthetics and goofy, sometimes bizarre, tone of user-generated Internet culture with real fashion credibility. Prior to founding VFiles, Quay was executive editor of V magazine. 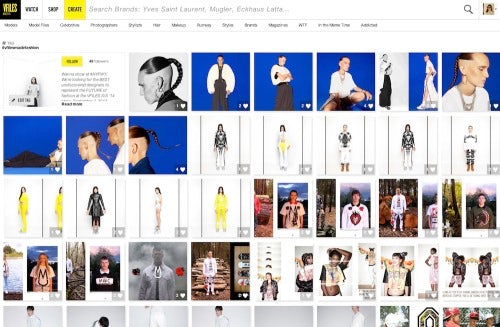 The search for designers for was conducted directly though the VFiles platform. “We purposely didn’t do tons of press around the process, as we wanted to keep it as organic as possible and see what bubbled up through our existing and loyal community,” said Quay. “It was interesting. Some designers uploaded video, animated GIFs, illustrations, look books… There was definitely a huge streetwear and sportswear component.”

From about 100 submissions, VFiles selected Ammerman Schlösberg, Maria ke Fisherman and Sam Mc. “Each embodies a spirit and feeling that we think is exciting, modern, wearable and shoppable,” said Quay. “Ammerman Schlosberg is an NYC-based design duo that takes cues from cosplay and fantasy, pairing down these themes with a sense of humour; Marie ke Fisherman from Barcelona has a definite cyber futuristic feel in both shape and fabrication, while Sam Mc from London captures the energy of the British youth culture in its unisex approach to sportswear.”

The show itself will be hosted by Casey Jane Ellison of “Status Update” and “WTFashion,” two recurring video programmes that appear on the VFiles, and aims to be more entertainment-focused than a traditional runway show. “We're actually doing a show, not a fashion show," said Quay. "Tons of energy, light, sound, music and audience enthusiasm is what we are looking for. We want to bring some energy and fun to the evening which will go straight from show to party."