NEW YORK, United States — Back in May, Richard Ma, a technology executive from Toronto, dropped $9,500 on a dress for his wife, Mary.

The dress had a chic, cape-like silhouette with a silver, iridescent shimmer and a subtle pattern of colourful swirls. It also wasn’t real; not in the literal sense, anyway.

The dress was created by Dapper Labs, a company that makes consumer blockchain products, and was designed by The Fabricant, a virtual fashion house based in Amsterdam. Ma had purchased the dress on Ethereum, an open-sourced Blockchain platform, in a charity auction at a blockchain conference in New York. Mary isn’t going to wear the dress so much as look like she is; Dapper Labs did a photo shoot with her and using augmented reality technology, created images of Mary in it, which she can share to social media. 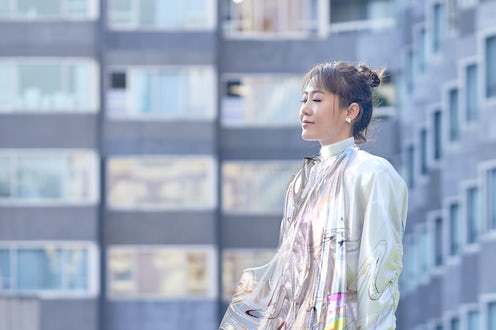 Ma is no ordinary consumer — he runs a blockchain security company. But the fact that he was willing to spend nearly $10,000 on a dress that doesn’t exist hints at the dawn of a new market in virtual fashion.

In certain corners of the tech world, spending real cash on digital apparel is as routine as taking a trip to the mall. And a number of companies are looking to bring virtual fashion into the mainstream.

That future may not be as far off as you think: apps that allow users on Instagram and Snapchat to alter their appearance are wildly popular, and brands like Gucci and Nike have also started using augmented-reality technology to let shoppers virtually “try on” clothing and shoes. The beauty industry is already deep into this space with augmented reality makeup apps.

Convincing customers that digital fashion can be just as covetable as their IRL equivalents is the next step. Virtual fashion would allow shoppers to keep up with trends without having to worry about fashion’s sustainability issues. The products would also earn consumers their coveted social currency — likes on social media, that is — and can also push the boundaries on what is possible in fashion design because the clothes don’t actually need to exist.

Shoppers might never come around to virtual products the way they do with real ones, but that doesn't mean the tech industry isn't going to try.

Inspiration from the gaming world

Virtual products have been popular in the gaming world for a while. Players of popular games like League of Legends and Overwatch eagerly drop extra cash on “skins” - outfits and accessories for their digital personas.

Epic Games’s Fortnite, the wildly popular online game that has over 250 million global users, reportedly earns $300 million a month selling skins. In May, Nike debuted two skins for the game that feature Jordan sneakers that are only available to be “worn” in Fortnite.

From games, it’s a small step to social media, another virtual world where people spend an ever-growing share of their time. According to a study by Global Web Index, Gen Z spends about 3 hours a day on social media, and a Nielsen report from 2018 found that US adults spend half their day interacting with the online world.

“There are few places that get users to care about their digital appearance as well as Fortnite, but Instagram is also one of these places,” said Matthew Hartman, a partner at seed-stage venture capital firm Betaworks Ventures who’s invested in social media startups and is interested in investing in virtual fashion tech.

There are few places that get users to care about their digital appearance as well as Fortnite, but Instagram is also one of these places.

The opportunity for virtual fashion extends to the world of avatars, a growing category amongst Gen Z users, according to Akash Nigam, the CEO of virtual avatar startup Genies, which launched in November 2018. A competitor to Snapchat-owned Bitmoji, Genies allows users to create digital clones of themselves or celebrities, and place their Genies in messaging apps and on social media.

Users can deck their avatars out in all sorts of wares, dubbed "wheels," and brands like Gucci and New Balance are paying Genies to have branded products in the app. Nigam said there’s been so much interest in dressing avatars that Genies will be adding more fashion-branded wheels in the coming months, and will begin charging for them.

Spending money on Gucci for an avatar is quite different than dropping thousands of dollars on a virtual dress, or real fashion product for that matter. But Nigam sees his product as a way for brands to convert future fashion customers: “Some kids can’t afford Gucci in real life, but they can in the digital world. It works as an entry point.”

In November, Carlings, a Scandinavian fashion brand, debuted a 19-piece virtual collection that sold for €10 to €30 (roughly $11 to $34). Shoppers who bought the virtual products submitted photos, which the brand turned into 3D images.

Stefanos Constantinou, an employee at Vice Media who bought a few pieces of the virtual collection, said the collection was a good way to keep up his Instagram #OOTD (outfit of the day) streak without contributing to fashion’s waste problem.

“I have tons of shoes that I wear once or twice and then move on from, and so this is a better way to try new things and get the hype out without having to continually acquire stuff and destroy the planet,” Constantinou said.

These virtual clothes are a drop in the bucket compared to the volume of products sold by Carlings, which has 200 stores across Scandinavia, and Carlings products sell for a higher price point. But Ronny Mikalsen, the CEO of Carlings, said he was excited at the possibility of a big fashion brand producing digital products on a larger scale.

“Just imagine how many free items are shipped to bloggers and influencers who wear products once and throw them out,” he said. “Digital fashion would completely eliminate that.”

RTFKT will sell real custom sneakers that start at $300 and go up to $3,000, with each pair coming with a digital version. Customers can get the sneakers IRL, or they can have RTFKT store the product once it's bought, and use the virtual images instead (the shoes live as a custom AR filter and can be accessed with RTFKT’s app).

"Social media makes up a huge part of sneaker culture and our business model will allow kids to flex what sneakers they’ve bought without having to worry about actually wearing them,” Vasilev said.

A path for fashion’s manufacturing flaws

Tech companies like Google, Apple, and Amazon have entire teams dedicated to study AR and VR, and are spending billions doing so.

Instagram, too, has been getting into the virtual product space. Facebook’s Spark AR Studio, which was launched in 2017, used to create Instagram filters and effects for Instagram Stories in-house. In May the company announced they were opening the technology, allowing anyone to create custom filters. While most Instagram filters are focused on facial movements, Pagotto said “this technology is going to open ways for people to augment themselves, and their environment. Once people will start focusing on their body, it will bring in new demand for virtual products, like dresses or sneakers.”

Still, the virtual world remains more of a promise than a reality. Startups working in this space remain on the fringes, waiting for virtual reality technology to hit the mainstream.

Some designers are making a different case for virtual fashion, hopping onto the trend toward reducing fashion waste.

For the last few years, Clément Balavoine, a French designer who works at Facebook-owned virtual reality hardware company Oculus, and Janis Sne, a digital fashion designer at Adidas Germany, have been experimenting with their fashion line Neuro Studios, which Balavoine describes as “digital-first” fashion. 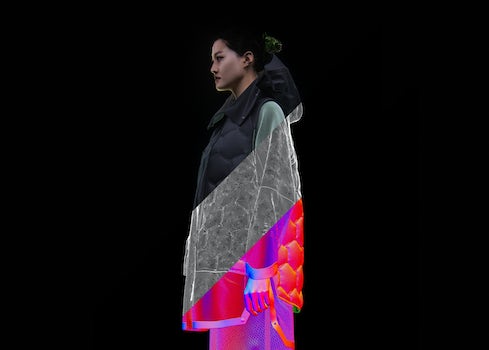 The process of making a virtual product. | Source: Neuro Studios

Products from Neuro Studios, like its utility vests, high-waisted track pants, and bomber jackets, range from $200 to $500 and are created first as 3D images. Neuro Studios has sold only about a dozen items. Balavoine said his company is less about selling product, and is more invested in proving that a sustainable, tech-driven supply chain works.

“We're trying to sell a new way of thinking because we find it sad that the same techniques of production have been used for decades when they are extremely wasteful,” Balavoine said.

Some brands are already turning to digital assets to gauge customer interest. Earlier this year, Claudette, a New York-based streetwear company, tested a product on a CGI Instagram character named Cade, who was created by the startup SparkCGI. Cade, a cool, blond “15-year-old” Instagram influencer with nearly 100,000 followers, wore a crew neck shirt from Claudette, and Layan Al-Dabbous, Claudette’s designer, said the company was able to test shoppers’ responses before creating the product by seeing how they reacted to it.

“Cade’s followers loved the tee and kept DMing him, asking where they could purchase it,” she said. “I didn't even know that the world of CGI fashion existed, but it showed me, going forward, that this is a really good way to promote and test clothing.”

Kerry Murphy, the founder of The Fabricant, which designed the dress Ma bought for his wife, said virtual fashion, at a minimum, can fix the sample process.

The Fabricant recently created a virtual catalogue of the latest collection of Napapijri, the Italian brand owned by VF Corporation. Napapijri plans to use the digital assets at retail summits, and Murphy said it reduces their waste because they don’t have to constantly procure samples for clients.

We find it sad that the same techniques of production have been used for decades when they are extremely wasteful.

This type of technology is already being employed by companies like Ann Taylor, BetaBrand and Hugo Boss, which use virtual clothing to partially replace sampling in the design process, as does the fashion supply chain company Li & Fung. Murphy said he is optimistic fashion can cut down on its waste once this technology trickles down to all mainstream companies.

“The design industry is ridiculous and reminds me a lot of how the film industry used to exist, where it was manually cutting film,” said Murphy. “They are constantly going through trial and error, and creating so much waste when digital tools much faster. With digital catalogues, we can reuse and recycle and change the templates and think far ahead. It’s cost-effective and time-effective.”

Op-Ed | A New (Augmented) Reality for Brands and Retailers