What Davos Means for Fashion

At the 2016 World Economic Forum, leaders discussed turmoil in global markets and the impact of ‘The Fourth Industrial Revolution’ on business sectors, including fashion.

What Davos Means for Fashion

At the 2016 World Economic Forum, leaders discussed turmoil in global markets and the impact of ‘The Fourth Industrial Revolution’ on business sectors, including fashion.

DAVOS, Switzerland — It boasts one the most exclusive guest lists on earth. The World Economic Forum (WEF) — called ‘Davos’ after the snow-capped ski resort where it takes place — is an occasion for the global elite to debate the most urgent and far-reaching issues on the planet.

It is a surreal and imposing event where billionaires, celebrities and heads of state rub shoulders with scientists, business moguls and the occasional Nobel Peace Prize laureate. This year’s edition concluded over the weekend in a flurry of helicopters that ferried its rarefied tribe out of the fortified Swiss retreat toward a fleet of private jets just over the horizon.

Squinting through the black clouds of terrorism, climate change, economic turmoil, refugee crises and pandemics, it can be hard to see what an event like Davos means for fashion. It is safe to say that fashion was probably the last thing on the mind of Prime Minister David Cameron when he delivered an address on Britain’s EU referendum. The same can be said for Leonardo DiCaprio when he attacked the greed of corporate oil barons or US Secretary of State John Kerry as he described the horrors of modern-day slavery.

But fashion does have a place at the table, albeit a small one. It helps that Davos is no longer the stern, solemn, sober affair of yesteryear. Regrettably, women and developing nations are still woefully underrepresented, but the forum is making progress in other realms.

All in all, Davos 2016 emerged as a forum that welcomes a far more diverse, youthful cast of characters and leaders from ‘soft power’ industries than it did in the past. 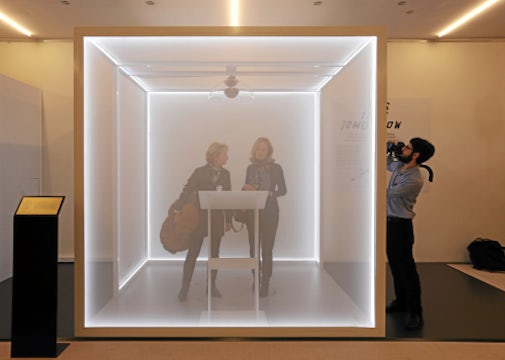 'This Time Tomorrow' exhibition at the 2016 WEF in Davos | Source: Flickr/Michele Limina

It is in this growing spirit of inclusion that fashion, art, design, culture and entertainment are making modest inroads to the corridors of power. While a few of the forum’s cultural sessions were framed by pithy quotes from departed greats likes Alexander McQueen and Pablo Picasso, organisers are now inclined to add more substance to messages about the creative industries.

Beyond the stardust of A-listers like Emma Watson, Will.i.am and Chinese actress Yao Chen — who were all on hand to promote their favourite humanitarian causes — the latest edition of Davos provided a series of intimate cultural experiences. ‘Mindfulness meditation’ sessions were available each morning alongside exhibitions, not to mention personal encounters with Hubo, the walking humanoid robot from South Korea, and virtual reality art films like the one about indigenous Australia in the Great Sandy Desert.

A handful of young visionaries active in fashion took part in the forum too, including Soraya Darabi, co-founder of Zady.com, a US-based e-tailer of sustainably-produced apparel. In an encouraging move, the WEF dedicated one of its smaller debates to sustainable fashion, through a panel called ‘Trash or Fashion?’ which was complemented by a session from the Imperial College London Ideas Lab about materials of the future.

In the first of the two, Francis Sollano, a social entrepreneur who upcycles garbage into wearable art for the benefit of his local community in the Philippines, was joined by Privahini Bradoo, co-founder of BlueOak, a San Francisco-based start-up that mines high-value metals from unwanted electronic waste. “We’re here in Davos to [find] individuals who can … capitalise on technologies making use of garbage,” Sollano told Techcrunch.

“Who knows, maybe ‘trashion’ is the future. Ten years from now, the direction is for fashion labels to really get the idea of sustainable fashion and of slow fashion. Whatever their non-toxic, non-organic garbage is they should be able to make use of that,” he added. 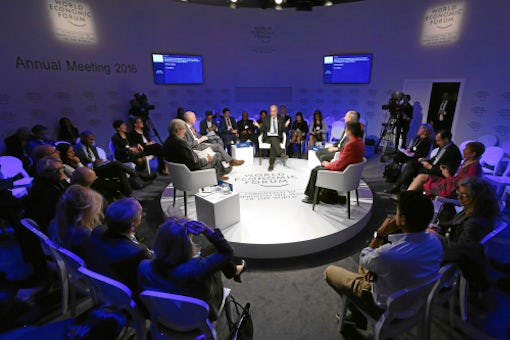 'What If: Robots Go to War' roundtable at the 2016 WEF in Davos | Source: Flickr/Photo Moritz Hager

Small-scale, experimental and conceptual projects like Sollano’s are an area that the WEF can continue to develop gradually.

But as a global business worth over a trillion dollars, fashion is an industry that shapes — and is shaped by — the biggest issues debated at the forum. In order to reach out to this contingent, the forum maintains partnerships with a small group of fashion and apparel giants, bringing visibility to strategic decision-making and cross-industry issues.

Firms like LVMH, Swarovski, Nike, Wal-Mart, eBay and Marks & Spencer have been active through membership of the WEF’s Consumer Community. And although the top brass from these companies are often invited to the forum, most now use it as a place promote a particular CSR agenda or to send colleagues to hobnob with likeminded peers.

Maria Eitel, founding president of the Nike Foundation, and Chantal Gaemperle, LVMH’s executive vice president of human resources and synergies, are two specialist executives who were invited to the event. Davos was also the stage for the unveiling of the 2016 Corporate Knights’ Global 100 index, which recognised Kering, H&M, Marks & Spencer and Adidas for their sustainability performance among major global corporations.

Fashion leaders outside this exclusive club certainly don’t need the kind of access these behemoths have in order to know that we are living in extraordinary times. Nor do they need Davos to feel the impact of many of the hot-button issues discussed at the forum. What the forum can do, however, is serve as a resource for in-depth research, interesting case studies and cutting-edge expertise featuring best practices around specific issues.

One session on human dignity in global supply chains, for instance, outlined the evolution of worker rights, norms and standards, and revealed key monitoring and tracking technologies. Given the pressure that the fashion industry faces to manufacture products ever faster and cheaper — and the high-profile factory tragedies in sourcing countries like Bangladesh — fast-fashion and high-street chains should find such WEF sessions especially relevant.

“In the future, you will know the source of every component in the products you use or manufacture, how it was produced, the energy consumed in its production, perhaps even who will own it next and how much they will pay you for it. This is the natural, inevitable outcome of combining ‘circular economy’ principles with digitisation technologies,” said Chris Dedicoat, executive vice president of US technology giant Cisco.

Another key intersection between Davos and fashion is where the forum brings international trade into sharper focus. This year, the WEF gathered specialists on the Trans-Pacific Partnership and experts from all four corners of the world to present their outlook on fast-changing markets like China, Russia, India, Africa, Southeast Asia, Latin America and the Middle East — all of which have been crucial to the recent expansion efforts of the fashion and luxury industries. 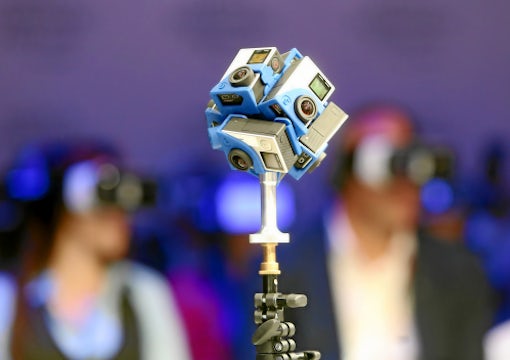 Viewing of a virtual reality film during a session on The Fourth Industrial Revolution | Source: Flickr

For an industry as heavily reliant on manufacturing as fashion is, the big theme of this year’s forum was a real eye-opener. ‘The Fourth Industrial Revolution’ was the banner for several sessions, including how to harness big data without losing the human touch. It is also the title of a new book on the subject by Klaus Schwab, founder and executive chairman of the WEF.

“I am convinced that the fourth industrial revolution will be every bit as powerful as the previous three,” Schwab said at the forum, before explaining that the latest ‘revolution’ is a fusion of technologies that blurs the lines between the physical, digital and biological spheres.

The ubiquity of mobile devices connecting billions of people around the world, coupled with emerging technology breakthroughs in fields such as artificial intelligence, robotics, the Internet of Things, autonomous vehicles, 3-D printing, nanotechnology, biotechnology, materials science, energy storage and quantum computing, is creating a new framework for industries, like fashion.

According to Schwab, the speed of current breakthroughs has no historical precedent and they are evolving at an exponential rather than a linear pace. This is how the new ‘revolution’ is able to disrupt almost every existing industry and is able do so in ways that transforms systems of production, management and governance.

"We stand on the brink of a technological revolution that will fundamentally alter the way we live, work and relate to one another," said Schwab. “We must develop a comprehensive and globally shared view of how technology is affecting our lives and reshaping our economic, social, cultural and human environments. There has never been a time of greater promise, or greater peril.”

The fourth industrial revolution is already impacting the fashion business through digital fabrication technologies, additive manufacturing, 3-D printing and new computational design techniques. "Imagine a world where you want a red cashmere sweater that is a certain fit, style and length. This is immediately manufactured and on your doorstep in five days. That reality is closer than many believe," said eBay’s chief executive Devin Wenig.

Pioneers are now working on the next generation of “4-D” manufacturing processes, such as self-altering products. Experts expect these to be capable of responding to environmental changes like heat and humidity, suggesting that they could be used for clothing and footwear. But for every new business opportunity, the ‘revolution’ will bring as many social challenges, said more than one speaker.

In the realm of the ‘wearable Internet’, for example, Schwab forecasts a major social tipping point when 10 percent of people start wearing clothing connected to the internet via embedded chips, textiles or other means. But the fourth revolution is stirring ethics debate. Some economists predict that it could cause greater inequality between high-skilled, high-paid labour and low-skilled, low-paid labour. There are worries that industries like fashion will lose many more jobs due to automation in the coming years.

On the other hand, the ‘revolution’ could also lead to “a supply-side miracle,” says Schwab, with long-term gains in efficiency and productivity based on lower costs for transportation and communication. This could make logistics and global supply chains for products like fashion even more affordable and effective.

Whether the fourth industrial revolution fulfils many of the predictions made at this year’s WEF is very much a matter of debate but, however it does evolve, business leaders in consumer industries like fashion cannot afford to dither.

“The fourth industrial revolution is still in its nascent state. But with the swift pace of change and disruption to business and society, the time to join in is now,” said Gary Coleman, global industry and senior client advisor at Deloitte Consulting.

Robert J. Shiller had starker words. “You cannot wait until a house burns down to buy fire insurance on it,” said the Yale University Professor and 2013 Nobel laureate in economics.