NEW YORK, United States — Inside Dirty Lemon’s store in the new Hudson Yards shopping mall, there’s a wall of refrigerators holding the brand’s charcoal, matcha and collagen lemonade drinks, but not a salesperson in sight.

Instead, customers send the wellness beverage brand a text message specifying the drink they’ve taken. Once Dirty Lemon saves their credit card information, shoppers can continue to send in future orders for delivery.

“Take what you want, text what you took, get on with life,” the store’s signs read.

Dirty Lemon is one of several brands embracing “conversational commerce,” a term coined in Silicon Valley that speaks to companies that interact with shoppers on chat platforms like text messaging, WhatsApp and social media direct messaging. Brands like Tamara Mellon, Burberry and Reformation, are jumping on board.

Proponents describe the approach as an upgrade to the “chatbots” that started popping up on retailer’s websites around 2015. Brands like Tommy Hilfiger, Estée Lauder and Everlane announced they were using software to communicate with customers on channels like Facebook Messenger without the need of a human service representative.

But the technology never quite matched the hype, with chatbots’ automated conversations coming across as “clunky and impersonal,” said Sarah Owen, senior researcher at trend forecasting firm WGSN. In 2017, Everlane ditched its Messenger bot, telling its customers via email that it had “decided to stick with what we do best — email.”

The updated formula involves a mix of the automated and the interpersonal. Brands are still using software to guide conversations, but usually there are humans involved in the exchange as well.

“Take what you want, text what you took, get on with life."

Conversational commerce is set to grow, as Shopify rolled out Apple Business Chat to its 800,000 merchants that use the e-commerce service in June. Last year, WhatsApp, Facebook’s popular messaging app, rolled out a separate app for small businesses, WhatsApp Business. Later this year, the new app will roll out a service that operates like online stores, allowing customers to browse products and makes purchases. A payment platform is also in the works.

Brands looking to conversational commerce are inventing ways to overcome one of the biggest challenges facing advertisers today: that a growing amount of consumers’ activity online takes place in private chats with friends and family, rather than on marketing-saturated public feeds. It’s a turning point for social media, amid mounting privacy concerns, and even Facebook founder Mark Zuckerburg himself has declared that for social media, “the future is private.”

“Consumers want to go back to one-on-one interactions, especially since the consumer beverage space in particular has become so impersonal over the years,” said Zak Normandin, founder and chief executive of Dirty Lemon parent company Iris Nova. “People want human connections, to know that there’s someone there on the other line, and SMS gives them that.”

The rise of conversational commerce

Approximately 6 billion text messages are sent in the US every day, according to CTIA, the trade association of the wireless communications industry.

Last year, Facebook, which bought WhatsApp in 2014, said 60 billion messages are sent on the app daily. WhatsApp now has more monthly active users than Facebook’s own app, according to a report from research firm App Annie. Facebook’s Instagram has over 1 billion active users, and its direct messaging feature is wildly popular.

For many users, it’s not such a big leap from chatting with friends to chatting with brands. Over 60 percent of millennials say they’d like to communicate with brands via text messaging, according to research from mobile engagement specialist OpenMarket.

Over 60 percent of millennials say they’d like to communicate with brands via text messaging.

“Customers are comfortable engaging through chat platforms, and there’s an easy barrier to entry to add commerce and transactions into the mix,” said Owen, of WGSN.

And conversational commerce is a trend that’s already popular in China, where new forms of online shopping and media often take hold first. WeChat started out as a communication platform, like WhatsApp, but it’s since evolved into its own e-commerce ecosystem, and even has its own mobile payments system, Wechat Pay. Today, 90 percent of its 1 billion users buy products through the platform.

A new line for brand-customer communication

Brands that have been interacting with customers through chat say it provides a level of intimacy often missing from digital commerce.

The luxury footwear brand Tamara Mellon started texting with shoppers last year via Apple Business Chat, which allows brands to communicate with shoppers as though they were one of their contacts. When shoppers click “let’s chat” on the company’s site, they are dropped into a text message with one of five employees. They use software from Liveperson, a conversational commerce company. Customers can send product requests via text message; they can also send photos of themselves and ask for shoes that match their outfits. 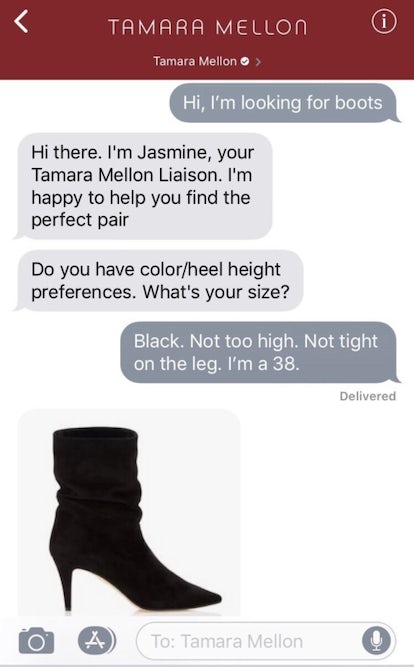 Chat now makes up 11 percent of Tamara Mellon’s sales, which total over $30 million. In June, the company raised $50 million.

“Customers are still frustrated by online shopping,” said Chief Executive Jill Layfield. “But they don’t want to be on the phone. It was clear that text is a communication experience that is used for family and friends that isn’t being utilised by businesses.”

Conversational commerce also eases the concern of customers who are making high-priced purchases that come with questions about fit or style, said Russell Kelly, Chief Commercial Officer at Hodinkee, a watch blog and e-commerce site. Hodinkee started chatting with customers via Apple Business Chat last month, after Shopify announced that it was rolling out Apple Business Chat to its 800,000 merchants that use the e-commerce service.

“Watches is the type of business where it’s really important to have customer interactions,” Kelly said. “With the chat on our website previously, we’d see a question and it would end there. But now ...we’re seeing real dialogue.”

Sophie Hill, the founder of luxury digital fashion company Threads Styling, which sells to shoppers via text message and WhatsApp, said the method’s success boils down to convenience.

Threads shoppers find products from luxury brands like Dior, Chanel, Hermes,and Louis Vuitton via the company’s Instagram posts and Story feed. By swiping up, they are dropped into private chat with one of the company’s 50 personal shoppers; the company says they are growing by 75 percent every year.

“I don’t think we've sent out an email in like, six or seven years,” said Hill. “It hasn’t been necessary because we have ongoing, constant connections with our customers. And all the money we aren’t spending on a website we are using to build a highly-skilled tech team that also act as personal shoppers.”

Big tech companies have already begun to eye the conversational startup space. In May, Salesforce bought Bonobo, an Israeli conversational AI startup, and Zendesk, the automated customer service company, also acquired a conversational commerce startup in May, the Montreal-based company Smooch. Even Steph Curry is moving into the opportunity; the NBA player took part in a $21 million round of funding in December for SnapTravel, a travel startup that books hotel deals for users via text messaging.

But could conversational commerce turn branded text messages into the new promotional email? Email once started as an intimate form of communication, and now, according to online marketing firm 99Firms, an average of 1.38 million branded emails are sent to customers a month, with more than half of shoppers deleting the messages without ever opening them.

"In order to feel like you are more trusted in e-commerce, it’s important not to spam or be pushy."

Brands need to tread carefully when it comes to texting, advised Jennifer Fleiss, the head of JetBlack, Walmart’s invite-only concierge service that lets shoppers access a text messaging shopping for $50 a month.

Fleiss said that while Jetblack users are highly engaged with the service, the company is careful not to bombard them with anything promotional. With the abuse of personal data by social media platforms like Facebook fresh on people’s minds, Fleiss said conversational commerce also presents a “danger zone for tech.”

“In order to feel like you are more trusted in e-commerce, it’s important not to spam or be pushy,” she said. “We find that customers only like when we contact them for something that’s highly personalised and relevant, but if you want to adapt a shopper and keep them, it’s on their terms.”