Shimmering tweeds, sporty daywear ensembles, and inventive accessories combined for another season in which Karl Lagerfeld outdid himself, writes Jessica Michault for Nowfashion.com. 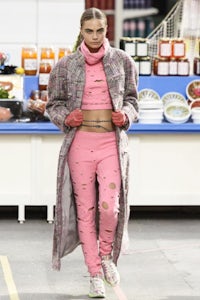 Shimmering tweeds, sporty daywear ensembles, and inventive accessories combined for another season in which Karl Lagerfeld outdid himself, writes Jessica Michault for Nowfashion.com.

PARIS, France — At Chanel this morning, designer Karl Lagerfeld out did himself once again by recreating an entire supermarket inside the gigantic main hall of the Grand Palais. He had it all: a fruits and vegetable section, canned goods, a liquor aisle, and a home improvement department. It was an ode to consumerism at its most luxurious.

Hats off to the masterful mind behind the mise-en-scène, Stéfan Lubrina, who customised all of the clever packaging, banners and displays. The charming play on words he used on the wrapping, such as the  “Boite a Bobos de Coco” first aid kits and the Mademoiselle Prive “Noire Cuir” or “1971 Blanc Coco” litres of paint were both playful and smart. Other standout packaging included the “Boy” hair mousse for men with the tag line “pour rasage peau d’humeur sauvage” and the “So Chic” beaux ballets for sweeping. But arguably, the best item Lubrina put on the racks were the Chanel chainsaws which featured the iconic leather and chain strap of a Chanel bag as the teeth of the power tool.

So engrossing was the audience in their virtual grocery shopping, or shoplifting, that the house had a hard time getting everyone to take their cardboard box seats.

When things finally settled down the show that Lagerfeld produced was almost as strong as the set that framed it.

Fans of the brand must have been thrilled to see that the couture Chanel sneaker made it into this ready to wear collection (those shown in January could only be purchased alongside the ordering of a couture ensemble). And the designer also smartly updated this footwear by proposing the sneakers in a lace-up boot alternative.

Lagerfeld expanded on the sporty casual vibe that the shapely ensembles originally hinted at by giving the collection another layer of urban cool via slouchy trousers, hole filled workout knitwear, iridescent leggings and some patent leather drawstring shorts worn over trackpants in the same material.  A vibrant abstract print filled with different coloured shapes, which was used as lining on coats or printed on shirts, also has a youthful dynamism to it. While at the same time it echoed the bright packaging that framed the catwalk.

The Chanel accessories department clearly had a lot of fun with this season’s theme. The quilted wheeled shopping bags and Chanel chain metal baskets were almost to be expected. But fun touches like candy necklace Chanel cuffs, the tweed covered bike lock chains worn as necklaces and the plastic wrap purse were all delightfully inventive.

When Lagerfled moved out of his strong daywear ensembles the collection lost a bit of its energy. The designer loosed up his dominant hourglass shape for evening so that the strong waistline became roomy. It definitely made the pieces look a bit more casual but they didn’t have the same impact as their daytime predecessors.

This collection was a real Supermarket Sweep for Chanel. Next season the brand is going to be hearing the tills ringing nonstop — right up until the moment the announcement is made over a loud speaker that the store is closing for the day, just like it did to inform today's audience of the end of this fine show.