A Night at the Museum with Jonathan Saunders 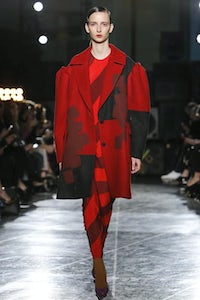 A Night at the Museum with Jonathan Saunders

LONDON, United Kingdom — It was a night at the museum. Jonathan Sauders took his Autumn/Winter 2014 show to the newly renovated Tate Britain in its after hours. The atmosphere was dark, both literally and figuratively, as guests were ushered in to a dimly lit hallway where the catwalk was nestled. The runway was a meandering one that stretched over 30 metres passing by mountains of disused retro television sets that served as part of the show space. They all displayed static. There was already a strong sense of foreboding, like a scene from DeLilo's novel "White Noise".

As the soft classical background music faded out, deep mechanical drones reverberated through the high ceilings of the hallway, past its imposing Roman columns. A voice in the track whispered "Danger, Danger" on loop. A model in an oversized fiery red overcoat with bold shoulders, pale complexion and reddened eyes cut through the audience with her decisive strut. She seemed vacant and dazed.

White noise became more of a central motif with each look as it was abstracted and rendered in glitter fabric in shades of aqua blue, burgundy and magenta. They appeared on the hemline of skirts and notably on the accessories.

patchwork was also a recurring element that adorned many of the coats and sheath dresses. They were done in an array of textured fabrics, mixing pin stripes and glitter swatches. The visual effect was reminiscent of Paul Klee's "Polyphonies" that depicted similar square motifs. Interestingly, the Paul Klee exhibition is on-going at the other Tate on the South Bank.

The impactful delivery of the collection aside, it didn't distract the audience from the exceptional pieces in Saunders' collection. To name a few, the sheer checkered see-through number in look 7, the wide-lapel grey coat with black hard lines delineating its edges in look 13, and the square shoulder knit with a collaged appliqué pencil skirt in look 36 were all obvious standouts.

The use of vibrant colours were true to form but this collection seemed more refined compared to Saunders' previous collections -- a popular direction judging by the cheers and resounding applause at the end of the show. The women after all were impeccably stylish, and if there were any element of "danger" at all, it would be for the need to snag them all when they hit the stores.