In a more cerebral and envelope-pushing show then its predecessor, Facchinetti juxtaposed structure and volume, but never quite achieved the same effortlessly chic style of her debut, writes Jessica Michault for Nowfashion.com. 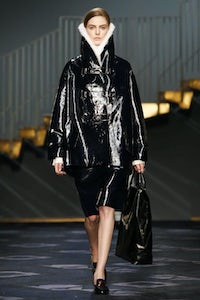 In a more cerebral and envelope-pushing show then its predecessor, Facchinetti juxtaposed structure and volume, but never quite achieved the same effortlessly chic style of her debut, writes Jessica Michault for Nowfashion.com.

MILAN, Italy — Ever the gracious hostess, designer Alessandra Facchinetti once again invited the fashion crowd into her “home” on via Palestro for her second show as creative director of the Italian luxury house Tod’s. This time the idea of exploring what the word “home” signifies lead Facchinetti to reinterpret the sculptural elements of interior design and furnishings in her fashion.

Booklets were handed out to each guest with the words Italian Set scrawled across the front. Inside the designer filled the pages with text about her inspirations, sketches of everything from the venue interiors and the clothing to the accessories and the dominating geometric patterns of the collection. She even added a few glossy pages to represent the show’s central color palette and print, as well as her fascination with slicked leathers this season.

It was a full-court press to make this collection easier to understand. And to a certain extent it helped, because this was a much more cerebral and envelope-pushing show than its predecessor, the most prominent design element being Facchinetti's exploration of stiff volume and angular shapes.

The first three looks hammered this concept home. Opening the show was a black lacquered coat with a collar that curved up over the ears, and featured slim architectural metal closures. When the model turned, she revealed that the piece had quite a voluminous back. Then a classic windowpane check motif, worn head to toe on the second model, moved from a soft oversized scarf and roomy coat into matching pants that had an unusual rigidity to them, as if each individual check had been bonded to those around it. This was followed by a glossy leather outfit that paired a capacious top featuring external pockets, which broke up the minimalistic silhouette, with an asymmetrical above-the-knee skirt that hung lower at the back.

These core ideas — the lacquered leather, the stiff fabrics, the odd pockets and the uneven skirt — were repeated and reworked throughout the show. But the way Facchinetti juxtaposed structure and volume never quite dovetailed into pieces that had the same effortlessly chic style of her debut.