A Variety Show for the Ages Pays Tribute to Karl Lagerfeld

A Variety Show for the Ages Pays Tribute to Karl Lagerfeld

PARIS, France — KARL FOR EVER. That solitary, emphatic "Ever" set the tone for Karl Lagerfeld’s memorial show at the Grand Palais, the venue which he had made his own with season after season of mindboggling spectacles for Chanel. In front of an audience of thousands, Canadian opera director Robert Carsen staged a variety show for the ages, intertwining Lagerfeld not only with the world of fashion, where he reigned supreme, but with the spheres of music, art, movies, books and technology. After 90 minutes of video testimonies, acting cameos, and musical performances, we reeled from the venue with one single, inescapable takeaway: KARL ETERNAL.

Which is just as it should be. His peers Ralph Lauren and Valentino Garavani claimed front row real estate at the memorial, but reflection on their parallel careers illuminated the extent to which Lagerfeld was an absolute rara avis. Will any biographer ever be able to unpick the intricacies of his story? His onscreen aphorisms came thick and fast:

“I feel everything I do is for the first and the last time.”

“It’s important to do but not to have done.” 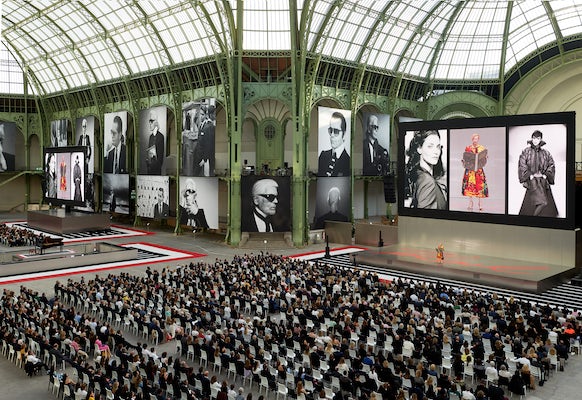 Inside the "Karl For Ever" memorial | Source: Courtesy

As Vogue Paris editor Emmanuelle Alt confided in one video clip, “The past was a secret part of his life.” Given that, it’s highly unlikely Lagerfeld would have appreciated this celebration of everything he had diligently shunted back into the mists of time. Which, for him, meant anything past yesterday.

For the rest of us, however, it was a delicious entertainment to watch Carsen bringing to surreal life the things that mattered most to Lagerfeld. Of course, there was a parade of his designs, from Chloe’s sly showerhead dress, through the years of Fendi and Chanel, and a flash of his own label, which always best embodied his rigorous design ethos. And yet this paragon of high-collared restraint also loved the tango and was apparently quite an expert. Cue the German Cornejo dance company from Buenos Aires spilling across the stage in a group demo.

He loved Virginia Woolf’s “Orlando.” Enter Tilda Swinton to act out a reading on the transformative power of dress from that novel. Lagerfeld’s obsession with his cat Choupette found an on-stage co-relative in Cara Delevingne’s ailurophiliac reading from Colette, one of his favourite writers. Karl was once inseparable from his fan. Actress Fanny Ardant read a poem by Stéphane Mallarmé to prove he wasn’t alone in his fixation. Helen Mirren declaimed more of Lagerfeld’s aphorisms from the slender volume “The World According to Karl,” while Charlie Siem played a sympathetic violin.

Lagerfeld subsumed his lack of musical chops in the design of a piano for Steinway. Lang Lang obliged with a performance of Chopin on that very piano. Swinton returned for an energetic performance of Edith Sitwell’s poem “Tarantella.” And then, just when you were thinking this was an extremely intellectual celebration of Lagerfeld’s many and broad cultural pursuits, street dancer Lil Buck interpreted Ryuichi Sakamoto. And Pharrell ambled onstage to deliver a “Gust of Wind.” He insisted the audience get to their feet and groove for Karl. They stayed there for the long ovation that trailed away through the memorial’s closing moments. 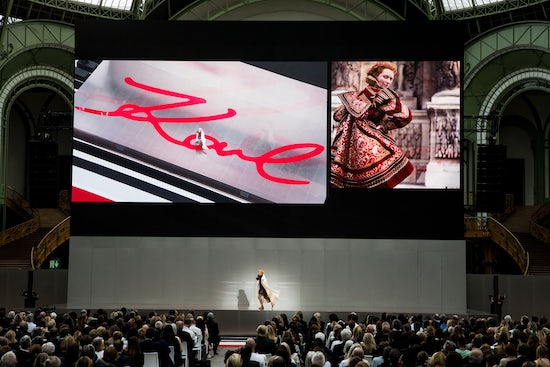 Many of the most familiar faces in the audience popped on the huge screens in the Grand Palais. Bernard Arnault compared Lagerfeld to Picasso. “There was nothing he didn’t know about,” said Alain Wertheimer, the shadowy figure behind the Chanel empire. Actress Carole Bouquet spoke of his kind eyes, how sweet he looked without his signature shades. Former collaborator Victoire de Castellane felt he needed those dark glasses because he equated sensitivity with fragility and weakness. And Baptiste Giabiconi, Lagerfeld’s erstwhile male muse, described showing up at Lagerfeld’s door to pick up his cat, whom the designer had been looking after while he was away. “She’s staying with me,” was the flat response. The cat was, of course, Choupette. The emotional complexity of the man was crystal clear.

Still, the best moment – and you got the feeling Carsen knew this – came at the very end. It was a blooper reel of Lagerfeld attempting an intro for a television piece. He fucked up hilariously, over and over again, the multi-lingualist completely forgetting which language he was supposed to be using, convulsing with laughter at his own increasing confusion. Maybe no one but his closest friends ever saw him quite so relaxed, but there were certainly plenty of other people over the years who, through a professional introduction to the man, had found his humour, generosity and curiosity inspiring. I count myself among them.

Memorials are usually deadeningly solemn occasions (one very good reason why you can imagine Lagerfeld blanching at the idea) but the best of them celebrate the good times. So that’s what Robert Carsen made us do. But I have to give the last word to Karl. During his video cock-up, he tells the producer, “I’ll do the whole thing over.” And I bet he would if he had the chance. All of it.

In Memory of Karl Lagerfeld