After four years of steady but slow growth, the sisters-in-law behind New York label Veronica Beard swallowed their pride — and lowered their price points — to reach the customers they were after.

NEW YORK, United States — Fashion week has come and gone, but Veronica Swanson Beard and Veronica Miele Beard — the sisters-in-law behind the American sportswear label Veronica Beard — are still in a celebratory mood. It was, after all, a year of challenges, changes and significant positive growth for their label.

The duo were named CFDA/Vogue Fashion Fund finalists and appeared on American television (they did not place, but considered it great exposure). They also raised funding from a consortium of investors that includes American fashion mogul Andrew Rosen, CEO of Theory and Helmut Lang and an investor in several of New York’s most exciting labels, including Proenza Schouler and Rag & Bone (they declined to reveal the names of their other investors). But perhaps most impressively, Veronica Beard saw a major lift in stockists and sales. In 2012, the label was available in 62 doors, including Saks Fifth Avenue. By the end of 2013, that number had increased to 82, with a year-over-year sales jump of 30 percent. But that’s nothing compared to this year, when the line is projected to land in a total of 130 doors, with a projected year-over-year sales increase of 120 percent.

So how did they get there? 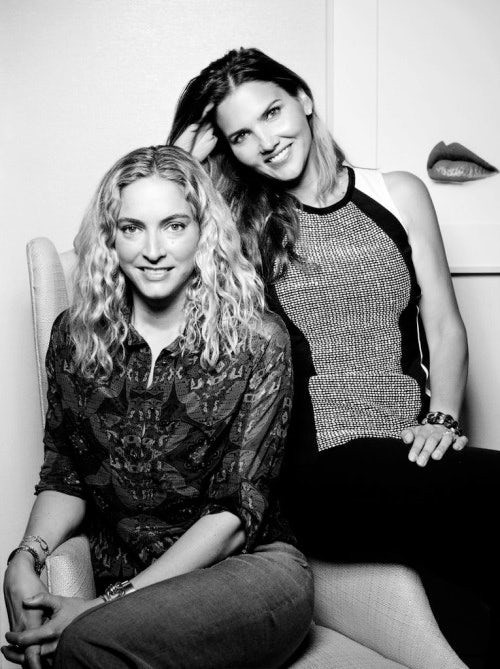 It was back in 2009 when Miele Beard, who worked in finance, and Swanson Beard, who worked in fashion, first decided to collaborate on a line of clothing. "Veronica and I had always been great friends and we were constantly bouncing ideas back and forth for a venture that we could do together,” Swanson Beard recalls. As mothers, each with multiple children, they aimed to create versatile, practical and aesthetically pleasing clothes that would be as comfortable as Lululemon yoga pants, slick enough for the office and attractive enough for their husbands. The answer was a line of fitted blazers with interchangeable dickeys (detachable bosoms that zip in and out of the jackets) in a range of styles and fabrics, from grey sweatshirt material to wool cable-knit. “It was a new way of wearing a jacket,” Miele Beard says of the flexible designs, which also reduced bulk (a thick wool dickey zipped into a blazer is much more streamlined than a chunky sweater). “It was genius to look so skinny and still be able to change the look immensely.”

They sourced their materials at the famous Mood Fabrics in New York's Garment District and used Swanson Beard’s connections to find a good sewer. By February of 2010, the duo was hosting market appointments from Swanson Beard’s Greenwich Village apartment and soon hired Allison Astin, a friend and well-known publicist. “We got some great stores to come in and just hear us out,” Swanson Beard recalls.

Veronica Beard started with eight stores, including New York's Kirna Zabete — the first account they landed — as well as Montaigne Market in Paris and Hirshleifers on Long Island. In the beginning, they focused solely on blazers and dickeys. And though the duo ultimately ventured into other product categories, staking a claim to the grownup jumpsuit and the scuba legging, a comfortable but figure-flattering take on the black trouser, for many seasons, growth was steady but slow.

But 2014 is set to be a seminal year for Veronica Beard. And while the injection of cash and the mentoring that came with the CFDA nomination helped push the label to the next level, it was a specific move that ultimately made the most difference: they adjusted their price points.

“The timing of our change in positioning and the investment were simultaneous. We had been planning to change lanes for some time and having such strategic investors involved gave us the confidence to do so,” explains Miele Beard. “I'll always remember [Neiman Marcus fashion director] Ken Downing's advice when he came to our showroom as one of our CFDA/Vogue Fashion Fund judges. He said, 'You want to be where the action is,' referring to the contemporary market.”

Their signature jackets were originally priced as “opening designer,” which meant between $895 and $1095. Those prices have since been reduced by about 30 percent and the same jackets now retail for between $695 and $895. Originally, they believed "opening designer" — or "bridge," as some call it — was the right positioning for the label because the company was producing locally in New York and, at first, in very small quantities. But “we always felt a little bit like we were swimming upstream,” Swanson Beard says. Department stores, after all, have very little room on the sales floor for “opening designer,” especially when it comes to sportswear.

“From a big-box retailer point of view, it sat in no-man’s land,” says Neiman Marcus senior vice president and fashion director Ken Downing, who watched the label closely from its incarnation. “It had great contemporary styling and attitude, but the prices were higher than advanced contemporary. After shopping it for a few seasons, I had a poignant conversation with them. In order to grow the business, they needed to determine where they were going to fall in the fashion world.”  Downing also encouraged the duo to start producing pre-collections, the cornerstone of department store buys, and Veronica Beard has since increased yearly deliveries from four to seven.

Downing says his customer is “25, no matter if she’s 17 or 77,” but the Beards also believe that their slightly more mature point of view — especially when compared to trendier, streetwear inspired labels like Alexander Wang — is a boon in the contemporary segment.

Unsurprisingly, they’ve chosen to move more of their production overseas, which has helped cut costs (as has increasing the number of units they are producing). “We still make a lot in the US, but we moved soft goods to China,” Miele Beard explains. While their knitwear was always produced elsewhere, they’ve since started doing silk abroad as well. The Beards say that the quality is better than ever and they’ve hired a chief operating officer — Stephanie Unwin, formerly of Li & Fung and Tibi — to ensure their new production strategy runs according to plan.

Unwin, however, was the only major hire the Beards have made since taking on investment. Instead, the duo is focusing on forging and maintaining relationships with major retailers in the US, as well as abroad (including Harvey Nichols and Matches in the UK). And, in the near future, they aim to launch shoes and accessories, as well as their first Veronica Beard retail store. “We believe our greatest advantage is the fact that we know our customer so well,” says Swanson Beard. “She is the focus of every conversation. We are confident now, with our new positioning, that our customer can find us and rely on us for the pieces of her uniform.”

On several levels, the Veronica Beard business may look very different from five years ago, but so are its commercial prospects. Neiman Marcus is now a major account.