What We Learned at VOICES: It’s Time to Reboot Our Humanity

The world is on fire. The causes are globalisation, technology, the climate crisis and generational change, but the antidote is culture and reimagining human values, argue Brad Grossman and Dan Mitchell of Zeitguide, reflecting on their experience at BoF VOICES. 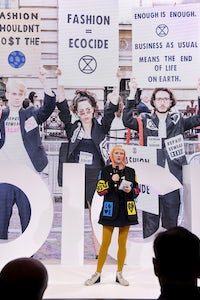 What We Learned at VOICES: It’s Time to Reboot Our Humanity

The world is on fire. The causes are globalisation, technology, the climate crisis and generational change, but the antidote is culture and reimagining human values, argue Brad Grossman and Dan Mitchell of Zeitguide, reflecting on their experience at BoF VOICES.

OXFORDSHIRE, United Kingdom —  The English countryside setting was calming… to a degree. Right from the start of BoF VOICES, a gathering for fashion insiders, the turbulent state of the wider world was front and centre: technology, globalisation, the climate crisis and human rights. “It’s amazing how the first morning showed me in just a few hours the scope and scale of the chaos in our current world,” said one attendee. “I feel uncomfortable in almost every way.”

Of course, discomfort can be a catalyst for change — part of the ethos behind the event, which is unafraid to tackle tough issues while treating guests to the comforts of life on Soho Farmhouse, one and a half hours from London.

“The world is fucking on fire right now,” said Iranian-American fashion writer and activist Hoda Katebi. She promotes garment workers' rights and ethical fashion production and introduced a panel on the underground fashion industry in Iran, where the state had imposed an almost nationwide internet blackout in the face of anti-government protests.

We also heard from Clare Farrell, who discussed the Extinction Rebellion’s fight for action on the climate emergency; Kelsey Juliana, who outlined her lawsuit against the US government, alleging that its policies on fossil fuels drove catastrophic climate change, violating basic constitutional rights; journalist Carole Cadwalladr, who addressed the troubling political ramifications of the misinformation crisis on social media; and activist Trisha Shetty, who spoke about human rights — and human wrongs — in her native India and around the world. Later, Dan Doty of men’s emotional health start-up Evryman, addressed the broken state of masculinity.

To be sure, there is still plenty of opportunity for the fashion business. Joann Cheng, chairman of Fosun Fashion Group, outlined the remarkable growth opportunities in China’s third- and fourth-tier cities. Meanwhile, Bolt Threads Founder and Chief Executive Dan Widmaier underscored the potential of a new class of innovative biomaterials, including its leather alternative made from mycelium bacteria. Elsewhere, Vestiaire Collective’s Max Bittner and Depop’s Maria Raga pointed to the fashion resale market, which, despite growing pains, is expanding rapidly.

Though a breakfast hosted by McKinsey & Company to discuss the key themes of the fourth annual State of Fashion report, confirmed that we live in troubled times. The BoF and McKinsey co-authored report forecasts slowing growth for the sector for the second year in a row and underscores a prevailing mood of anxiety among senior fashion executives.

What became clear throughout the conference is that the industry is at a crossroads and it’s about much more than making and selling clothes, although these activities, too, must be fundamentally re-examined in the face of radical shifts. But sometimes even powerful executives can feel a bit powerless in the face of big questions. How can we be responsible citizens of the world while maintaining profitability? How can we scale without losing our souls?

The uncertainty facing the industry are largely perceived to be driven by disruptive forces like technology and globalisation. And yet, we under-appreciate the impact of culture to define our future. It’s a topic Andrew Blau of Deloitte Consulting tackled head-on in his talk titled “Dude, Where Is My Flying Car?"

His presentation was ostensibly about the future of mobility, but it was really about something much bigger: the interplay between changing human context and enduring human values. “Don’t be fooled. The auto companies don’t control this. The tech companies don’t control this,” he said. “They’re all navigating change, too, learning and adapting as best they can. But they’re not the only authors of this story. This is not a tech story; this is not an auto story. It’s a cultural story.”

In other words, addressing the challenges we face is less about the next technology trend or new consumer market. It’s about cultural choices and reconsidering what kind of humanity we all want.

This, for us, was the biggest takeaway from VOICES: rebooting our sense of our shared humanity is the only way the fashion business can be able to effectively take on the world’s problems. A shared commitment to basic human rights and universal human values. This is what will ultimately guide us through the chaos. It’s these enduring codes, not the codes produced by software engineers, that ultimately will guide us through the chaos and define who we are and how we live.

So what can we as business, policy and creative leaders do?

1. Dignify the vibrant full expression of humanity through genuine inclusivity. This is not the current trend in inclusivity-marketing that’s practised by some of the world’s biggest fashion and beauty companies. Breaking down this distinction, gender non-conforming writer, rights activist, and performance artist Alok Menon did not mince words. “People want the aesthetic of diversity, but they don’t actually want us. I am not an idea. I am not a symbol. I am not a prop. I am a person.”

2. Build greater connectivity. This is not the connectivity of 5G (another subject mined in VOICES). A society that unites us, but also resists what Serpentine curator Hans Ulrich Obrist called the“homogenisation of globalisation” and respects “the richness of our differences.” Obrist called upon artists and other creative practitioners to think less about producing work and more about producing reality — affecting genuine change.

3. Think differently about your business strategies and what defines success. Don’t just look at what you are offering to the world solely through a lens of technological or global transformation, but instead cultural transformation on a human level. Listen to what the world wants. Listen to what both your employees and consumers want and feel. You will find that they want respect, trust, love and community, as well as ways to express true individualism and interiority. This is what makes us all human.

Humanity needs a reboot and, as far as we can tell, fashion has a serious role to play.

This piece was written by Brad Grossman, founder and CEO of Zeitguide, and Dan Mitchell, Zeitguide Contributor. Zeitguide studies, advises and publishes on how our constantly changing culture impacts business and society.